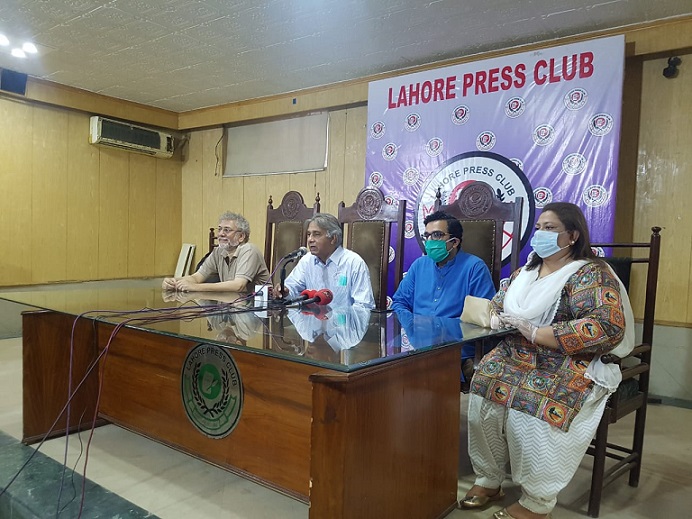 Lahore: A number of rights groups, lawyers, academics and civil society activists in a press conference, have termed the approval of the National Commission on Minorities by the federal cabinet on May 5, 2020 as contempt of court. Speaking at a press conference at the Lahore Press Club, Peter Jacob, Chairperson of the Peoples Commission on Minority Rights, noted that in its submission to the Honourable Supreme Court of Pakistan on February 19, 2020, the Ministry for Religious Affairs had noted that the National Commission on Minorities would be constituted through an Act of Parliament. However, the cabinet did exactly the opposite by approving the creation of an Ad-hoc committee under the Ministry of Religious Affairs with no statutory powers on May 5, by. ‘This is a deliberate aberration from intent of the original judgment in 2014 and pledge made in the court, therefore tantamount to contempt of court,’ Mr Jacob maintained. ‘We will surely challenge the cabinet decision in the Supreme Court,’ he noted.

Speaking on the occasion Supreme Court lawyer and former UN Special Rapporteur Hina Jillani and former Chairperson of the National Commission on the Status of Women, Khawar Mumtaz, argued that a commission on the minorities will only be effective if it is created just like the other national commissions, through an act of parliament. Only then will it be independent and have any authority. Without the commission ‘legally existing’ there will be no point of an adhoc commission with no powers, authority or mandate.

Academic Dr Yaqoob Bangash added that the adhoc commission on minorities was first constituted under a resolution of the federal cabinet in 1990. Since then it has been constituted several times, but it has not met more than once every year, without any effect or impact. ‘The force of law needs to be behind such a commission, else it is an occasional social meeting,’ he argued.

Mr Peter Jacob underscored that the creation of a statutory National Commission for Minorities Rights is an obligation on the state of Pakistan under international conventions, and more so as an ethical and moral responsibility of the state to safeguard and promote the interests of minority citizens in Pakistan, as mandated by the Constitution of Pakistan.

Among other who endorsed the view were Abid Saqi, Vice Chairman of Pakistan Bar Council and Amar Lal Randhawa.