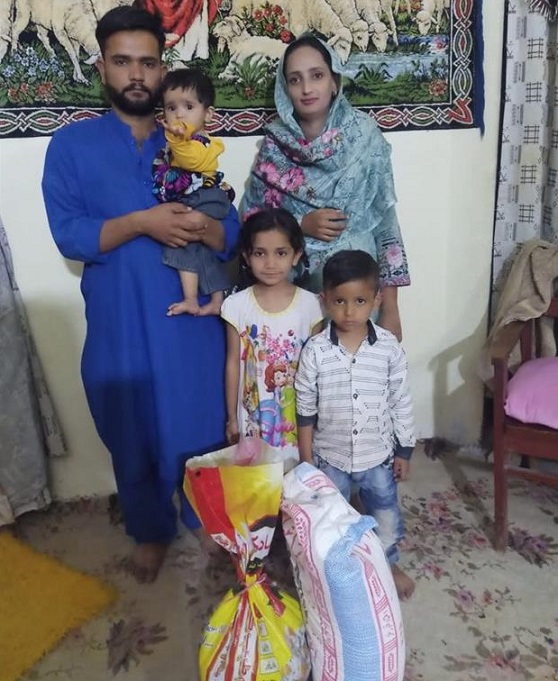 Pakistan: The food distribution programme launched by British Asian Christian Association has been able to reach new converts to Christianity.

So far around 6 ex-Muslim and ex-Hindu families that have only come to the Christian faith just a few months before the pandemic started, are now benefiting from British Asian Christian Association’s programme of food distribution.

Since the impact of Covid-19, BACA has been working hard to reach many of the deprived and starving Christian communities of Pakistan and so far a total of 158 families have been reached.

All the converted families have plans to be baptised later this year and were prayed for encouragement in their new faith to continue.

Under our voluntary and growing widespread food distribution outreach campaign, we are able to bring aid to different areas of Pakistan and are receiving several requests for help in other communities who are not benefiting from any help from the Pakistan authorities.

Food parcels distributed by the BACA in the rural communities in and around the village of Kukra, Faisalabad, were handed to families who had been praying for God to help them since the pandemic began.

Speaking to Saleem Masih (58), one of the residents of Kukra, described working in a brick kiln factory as virtually slave labour and was only earning roughly £3 per week but because of the lockdown has been forced to borrow 30,000 PKR, equivalent to a years’ salary, from his employers bonding him further to them.

Hameeda Bibi, a 48-year-old single mother of 4 grown up daughters is unable to attend work in the bag factory that employs her due to COVID-19 restrictions and has been forced to spend money she saved for her daughters’ wedding over many years on just food alone.

Our teams have also reached Essa Nagri, Quetta, and Khaliq Nagar, Lahore where 10 families were given food parcels with the help of Patras Bootra, Chairman of Uriah Welfare organisation since the start of the lockdown mid-March.

Mr Bootra, who set up the welfare organisation in 2013 to help the poor Christian brick kiln community with welfare and education programmes, has previously raised funding to help over 130 families and estimates a further 1800 impoverished families are in need food aid.

Meanwhile the number of Covid-19 cases has increased in Pakistan to 56,349 with 1,167 fatalities and the recent number of confirmed cases are mostly from the brick kiln communities.

Fearful of the economic and financial impact and swayed by the acute hardship suffered by millions of poor families, Prime Minister Imran Khan has defended the lifting of the lockdown last week, saying the virus spread has been well below projections.

“The ending of the lockdown doesn't mean the threat is over,” Yasmeen Rashid, the Punjab health minister, said in a television interview on Wednesday, adding that people needed to adopt to the safety measures.

The easing of the lockdown is reported by the Hindu Times to be at a time when a leaked report suggests that close to 700,000 people have been infected in Lahore alone.

Juliet Chowdhry, Chairman of the British Asian Christian Association, said: "Though most of of the lockdown has been eased many Christians are still without work as the nation of Pakistan attempts to recover their economy.

"Most shops remain closed and Christians who work as shoe-shiners, hawkers, domestic cleaners and other extremely low-paid jobs, are finding it hard to make any money.

"There is still a great need for food and other support for many Christians who are close to if not starving.

"We are slowly reaching families across Pakistan but face an uphill struggle with our limited resources.

"International governments must look at how they can help with the growing debt crises in Pakistan."

British Asian Christian Association, will continue its aid to starving families who are still adjusting to the harsh economic climate in the wake of the opening of their lockdown.