An Open Letter for the justice of underage girls of minorities of Pakistan. By Rt. Rev. Farhad shahzad 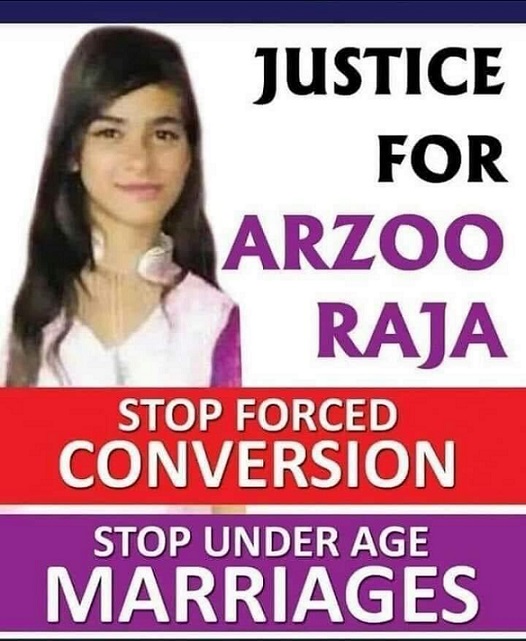 Pakistan Christian Post, we appeal for the Pakistan as great nation in the world on the vision of Quid – e – Azam Muhammad Ali Jinnah where all nations can live peacefully without discrimination of cast, colour, creed and religious prejudice. As all nations are living in other countries of Asia and Europe peacefully and respectfully.

In the last seven decades, Pakistan’ minorities faced extreme of hatred and discrimination. Even Ministers were asking for rights as respected minorities members from the Speakers of National Assembly, it is recorded in the parliament. Minorities’ Ministers had been appealing to stop forced conversion and forced marriages, especially underage girls who have been spoiled in the students’ age. One student is a pillar of the Nation. One student's future destruction affected families, even tribes. But now continual persecution, forced conversion, forced marriage.Minorities cannot take breath in this killing wind of the atmosphere.

Seven decade’ terrible situation outcome is Asylum seeker and refugees’ case in other countries due to insecurity, injustice and persecution. These religious discrimination'  cases had already created the image of a corrupt and terroristic part of the world in the eyes of world. It is not a good impact in the eyes of the world about Pakistan, Insecure lives of families want to secure their future from extremist mentalities. Because Pakistan’ pollical system had been corrupt, they did not take care the educational system, Law & Orders even qualified judiciary of judges had been predetermined to do injustice in the realm of religious discrimination with the minorities. It is totally traitor spirit within a country from Law & Order. Then humanity’ death had been in Pakistan due to racialism.

If an honourable qualified judiciary and parliament had not been in the realm as a great nation of Pakistan, who are the head of justice and patriotism. Then results had been discrimination, terror, injustice and corruption locally that now increase globally.

We, Minorities leaders and responsible patriotic citizens of different churches of Pakistan appeal to you to give us our human rights for having rights of good citizenship without religious prejudice but on the humanity basis. One sided patriotic spirit never succeeded in these seven decades among multiple racialisms. We are totally fed up with the injustice and discriminated system of Pakistan.

We did not demand one part of Pakistan as peaceful and patriotic citizen, but we just appeal for human rights and implementation of Law & Orders in respect of trust with Quaid – e – Azam Muhammad Ali Jinnah before creation of Pakistan. What is Law and policies in this renewed Pakistan for minorities. We hope for good and prosperous Pakistan where humanity will have human rights.

Now decision and justice are in your hands for the helpless, hopeless and grieved humanity of minorities who had lost their hope in Pakistan in the long run of persecution in the last seven decades.

We want to see renewed Pakistan in your presence where all minorities can have equal rights as Quaid – e – Azam Muhammad Ali Jinnah’ vision and dream as great nation.  All minorities’ prayers and patriotic spirits are with you according to your movement of Justice.