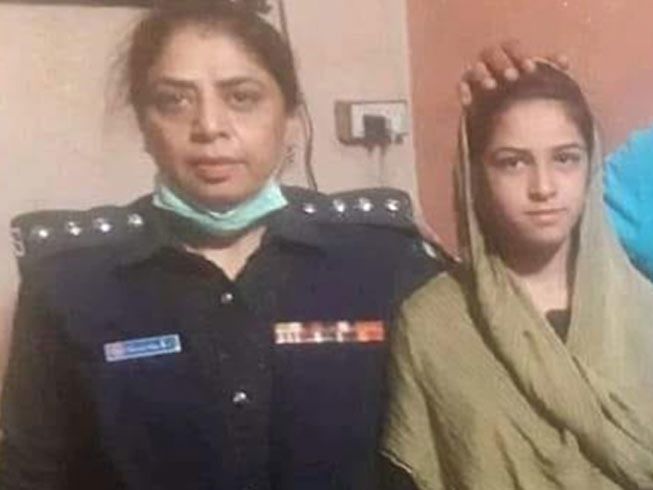 Karachi: A Division Bench of Sindh High Court comprising of Justice KK Agha and Justice Amjad Ali Shaito head the case of 13 years old Christian girl Arzoo Raja and ordered her to send to Shelter instead of giving custody to her parents or Muslim family whom she married.

As Arzoo Raja was produced before Judges of Division Bence, she was asked to say without any fear that she was pressurized by any one to convert to Islam, on which she again said “I became Muslim with my free will without any pressure and married to Azhar”

According to reports, on October 27, 2020, one Muslim named Mohammad Azhar kidnapped his neighbor, a 13 years old girl and forcibly converted her to Islam and took her in his marriage. Mohammad Azhar is already married.

The Division Bench Justices ordered to present medical report to for which a five-member Medical Board was formed. The medical report said that age of Arzoo was found 14-15 years after conducting her reports and medical checkup.

After hearing case, the SHC ordered to send Arzoo in Shelter Home where no one was allowed to meet her if she not wanted to meet.

In previous hearing when the parents of Arzoo Raja claimed that Sindh Child Marriage Act have been violated on which the said Division Bench ordered to police to produced Arzoo and Azhar in court. Where Mohammad Azhar was arrested and given in police custody and Arzoo to Shelter Home.

According to reports of Pakistan Christian Post, about 1000 young women of Christian, Hindu and other religious minorities faiths are kidnapped, converted to Islam and then taken to marriages by influential Muslims as sex slaves.

In such cases old Muslim men who have already married and family life, use young Muslim boys to take Christian girls under Love Jihad and then for money hand over to those elderly men.

One Christian Journalist busted one big gang of Chinese Human Trafficking who with support of some small-scale Churches were marrying poor Christian girls and then taking them China where they were forced to do prostitution. On community human right defender’s uproar in media, the Chinese gang members were arrested in Pakistan. The Christian girls from Faisalabad, Lahore, Sialkot, Sheikhupura and other cities of Punjab province of Pakistan trafficked to China is more than 200 while government of Pakistan hesitate to put up this human issue with China due to huge loan and CPEC invest.

After all, Arzoo Raja is sent to Shelter where she is not safe as employees of these Shelters are Muslims who provide meeting with Muslim family members of Mohammad Azhar on some bribes.