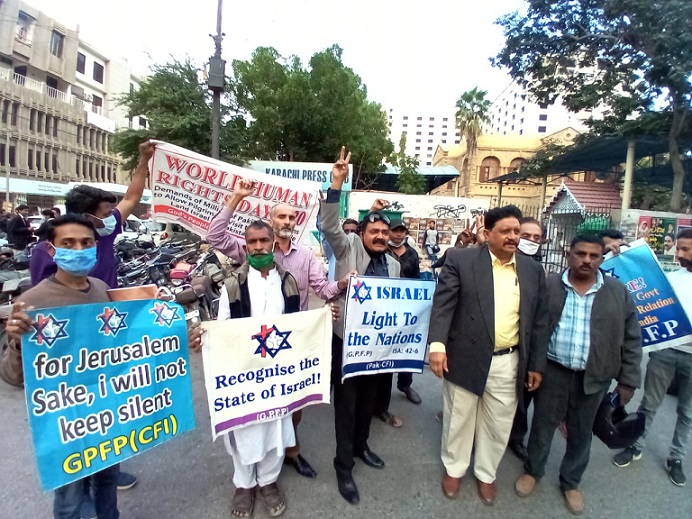 The Pakistani Christians observed World Human Rights Day 2020 and held a peaceful protest demonstration in front of Karachi Press Club in demand to allow Pakistani Christians for pilgrimage visit by recognizing the Jewish state of Israel just like many Middle East and other Muslim countries has established ties.

Millions of Pakistani Christians and thousands of Jews living in Pakistan with their hidden identity are ban to travel to the Holy / sacred Bible land situated in the state of Israel for pilgrimage visits with endorsement on Pakistani Passports.

The Pakistani Christians lack religious freedom as given in the constitution of Pakistan 1973, and none of the government since the creation of Pakistan has ever taken any notice to this longstanding dream and desire of Christians which is according to the Holy Bible for religious pilgrimages, thus  depriving Pakistani Christians to perform their religious rituals and obligations in the holy city God Almighty and as well as of King David The GPFP-CFI is struggling since 20 years and raised voice against the religious discrimination and insufficiency of Christian religious liberties and rights that are the  biggest minority in Pakistan but all in vain.

When the ban on YouTube can be lifted, then why not ban on religious pilgrimage visit to Israel for Christians can be eliminated in Pakistan?  In the light of Bilateral Protocol Agreement 1974, to visit religious shrines signed between India and Pakistan government, it is demanded to make such agreement for Christian people of Pakistan for pilgrimage visit to Israel, just like the above-mentioned agreement for the performance of religious pilgrimage, Obligations in the matter must be analyzed in the light of "Medina Treaty" made with minorities by Hazrat Muhammad SAW (Peace be upon Him).

Aamir Suleman Aziz Deputy Secretary of "God's Peoples Fellowship of Pakistan" once again filing the Constitution Petition in the Honorable Supreme Court of Pakistan and on behalf of Vice Chairman Mr.  Shahbaz Ashraf reminded the Prime Minister Imran Khan for his promises made with the minorities and addressed the protest demonstrators and urged the government of Pakistan, especially ministry of interior and ministry of foreign affairs, UNO to take immediate notice of the sentiments and devotion of Christian people.

Such religious demand must be obliged and such aforementioned agreement between Pakistan and Israel must be established in the largest religious interest of Pakistani Christians.

The Christian religious leaders among whom Bishop Gulfam Javed (President) Pakistan Masiha Party Sindh, Pastor Afzal Bashir Bhatti Chairman Pastor Network of Pakistan, Mr. Gulrez Pasha Chairman All Churches Alliance, Pastor Saleem William of National forum for voiceless, Pastor Rizwan, Pastor David Ghulam, Pastor William Secretary Religious Affairs, Mr. Arnald Valentine addressed the protest demonstration and chanted slogans, holding banners and placards in hands where it was written upon "Pray for the peace of Jerusalem", "Israel you are light to the nations", "Recognize the Jewish state of Israel", "  For Jerusalem sake I will not keep silent "" Allow us to visit Israel on Pakistani Passports for pilgrimage "as it is the legitimate religious right of Pakistani Christians.  ground reality and in view of the circumstances, reasons and grounds it is therefore humbly requested to the Honorable President of Pakistan to kindly draw your focus attention towards the grievance of Pakistani Christians and extend your kind cooperation, support and your practical help to enable us to continue our Israel is a struggle for such religious demand and freedom in Pakistan.

It is also requested to please highlight this legitimate religious issue of Christians in Pakistan those need your urgent attention in this regard.  The (GPFP-CFI) shall be highly obliged.