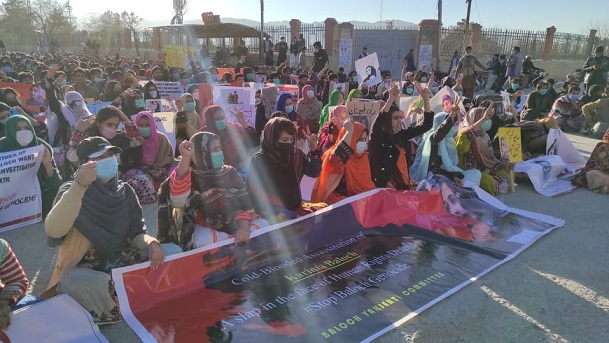 Quetta: (By Manish Rai) Demonstrations were organized in Quetta and Hub Chowki in the memory of renowned Baloch activists and former Chairperson of BSO-Azad Karima Baloch. Chanting the slogan of “long live revolution”, scores of participants – predominantly students – carried placards, banners, and portraits of the deceased rights activist that ubiquitously bore the messages “#StateKilledKarimaBaloch” and “Karima Baloch – the symbol of resistance”, and demanded the international community to take notice of her mysterious death and bring the culprits to justice.

The demonstrators also held a candlelight vigil for the former Chairperson of BSO-Azad whom they mentioned as the “pioneer of women activism” in Balochistan. Scores of people participated in a rally organized by the Baloch Yakjehti Community in Hub Chowki. The participants gathered in front of the Lasbela Press Club and carried out a rally on the RCD road. Addressing the protesters the speakers said: “Karima is the symbol of resistance; ideologies don’t die. She will continue to lead us.” Also, Baloch leaders said that the ‘murder’ of Karima Baloch in Canada is raising many questions and demanded a thorough investigation of the incident.

A similar demonstration was also organized in Quetta city by the Baloch Yakjehti Committee, in which it was announced that they will carry out protests in other areas of Balochistan as well. Baloch activists distributed pamphlets on the streets, inviting people to join the protest and raise voice for Karima Baloch. Addressing the people it was said that Ms. Baloch’s death is not an accident, but rather the continuation of the “kill-and-dump” policy of the Pakistani state. Karima Baloch’s death is not the only case of an assault on an exiled political worker. Before her, Sajid Hussain was ‘abducted’ and subsequently ‘martyred’ in Sweden. The speakers said that the silence of international rights groups on the plight of Baloch political workers is a reflection of their prejudice against them.