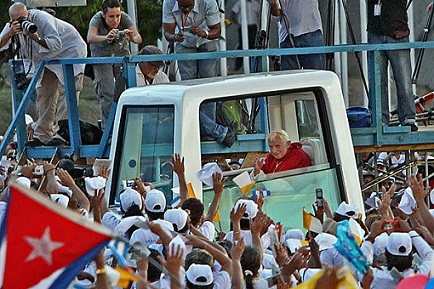 HOLGUIN, Cuba: September 21, 2015. (Reuters) Pope Francis went to east Cuba on Monday to celebrate the second Mass of a trip that has earned him praise for aiding the Communist rulers' rapprochement with Washington, but has so far steered clear of ov

He is the first Pope to visit Holguin, capital of the province where the Castro brothers, Raul and Fidel, grew up. On nearly every block, posters welcoming the pontiff adorned doors and telephone poles, while bike-taxis and horse-drawn carriages traversed below the yellow-and-white flags of the Vatican, fluttering alongside Cuba's red, white, and blue. Raul Castro's government hopes the 78-year-old Argentine pontiff will condemn the still-intact U.S. economic embargo against Cuba before leaving on Tuesday. Critics of the one-party state want support for dissidents, some of whom have been denied attendance at papal events. A local human rights group said some 50-60 government opponents had been arrested and several dozen more blocked in their homes by state security agents. The same had happened during Pope John Paul's visit in 1998 and Pope Benedict's in 2012. "We estimate about 100 people affected by this preventive repression," said Elizardo Sanchez, who runs the Cuban Commission of Human Rights and National Reconciliation. "I have had about 10 agents outside my house. It's an exaggeration. They even followed me to the bread shop. But others are not allowed out, the agents are at the door." During the first two days of his visit, Francis has stuck largely to spiritual messages in speeches, though he has also called for tolerance of different ideas and urged the old Cold War foes to deepen their detente after this year's restoration of relations. Before thousands in Holguin's Revolution Square, the pontiff is set to deliver his message under the gaze of a giant depiction of the 'Virgin of Charity,' Cuba's patron saint, recently affixed to a neighboring apartment building. A life-sized crucifix brought into the square blocked a permanent monument to Cuban independence heroes just beyond, and was sandwiched between two new billboards, one with a Biblical quote and another citing national hero Jose Marti: "Man died one day on the cross. One must learn to die every day on the cross." "Believer or non-believer, we believe in the pope!" said Yami Mendez, a retired schoolteacher in Holguin who is not a Catholic but, like most Cubans, holds Francis in high esteem. Climbing the steep road to a hilltop cross where the pontiff will bless her city, Mendez cited benefits associated with Francis: the U.S. diplomatic breakthrough, the release of more than 3,500 common prisoners, and the fresh paint and renovations at the places he will visit. But there was no encounter for dissidents. Three were hauled away from Revolution Square on Sunday before the pope celebrated Mass for tens of thousands. Two prominent opponents, Miriam Leiva and Martha Beatriz Roque, said they were twice detained to stop them attending papal events. Berta Soler, who heads the high-profile Ladies in White group, said various members who intended to attend the Masses in Holguin and Santiago were being "harassed" not to go. The Castro brothers, both baptized Catholics and educated by Jesuits, repressed the Church after their 1959 revolution but relaxed that stance from the 1990s and have now seen three pontiffs visit them in less than two decades. Francis, who has provided a crucial back-channel for messages between Havana and Washington over the past two years, will fly from Cuba to the United States on Tuesday.