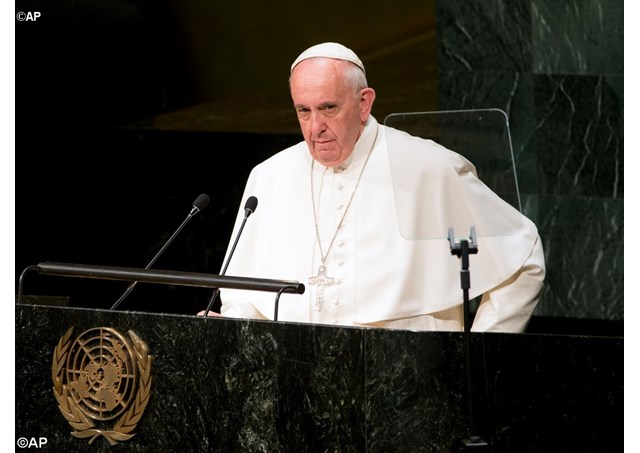 New York: September 25, 2015. (VR) Pope Francis has addressed the United Nations General Assembly in a highly anticipated speech, in which he talked about the protection of the environment

and, as he put it, “today’s widespread and quietly growing “culture of waste”. The Holy Father also referred to the effects of economic and social exclusion with, "its baneful consequences: human trafficking, the marketing of human organs and tissues, the sexual exploitation of boys and girls, slave labour, including prostitution, the drug and weapons trade, terrorism and international organized crime." During the speech, delivered in Spanish, the Pope underlined the devastating consequences of war, especially in countries such as Ukraine, Syria, Iraq, Libya, South Sudan, and the Great Lakes region. In wars and conflicts, he said, “there are individual persons, our brothers and sisters, men and women, young and old, boys and girls who weep, suffer and die. Human beings who are easily discarded when our only response is to draw up lists of problems, strategies and disagreements." In the wide ranging speech, the Holy Father also spoke about the persecution of religious minorities, including Christians.