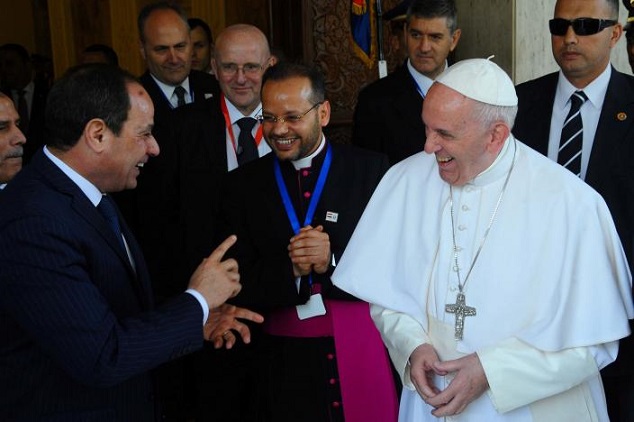 Cairo: April 28, 2017. (Reuters) Pope Francis, making a two-day visit to Egypt, urged Muslim leaders on Friday to unite in renouncing religious extremism at a time when Islamist militants are targeting ancient Christian communities across the Middl

Francis's trip, aimed at improving Christian-Muslim ties, comes just three weeks after Islamic State suicide bombers killed at least 45 people in two Egyptian churches. "Let us say once more a firm and clear 'No!' to every form of violence, vengeance and hatred carried out in the name of religion or in the name of God," the pope told a peace conference at Egypt's highest Islamic authority, Al-Azhar. "Together let us affirm the incompatibility of violence and faith, belief and hatred," he said at the 1,000-year-old Sunni Muslim seat of learning. Francis headed straight to meet Egyptian President Abdel Fattah al-Sisi after landing in Cairo, driving through heavily guarded streets but eschewing an armoured motorcade and instead using a normal car with his window wound down. "Pope of Peace in Egypt of Peace," read posters plastered along the road leading from the airport to central Cairo. He is due to give three speeches on Friday and will celebrate an open air Mass on Saturday at a military arena. His visit comes at a time of high tensions in Egypt, the most populous Arab nation. Besides the Palm Sunday bombings, Islamist militants last week attacked a police checkpoint close to St. Catherine's monastery at Mount Sinai. The pope referred to Mount Sinai, where the Prophet Moses received the 10 biblical commandments, and specifically invoked the famed injunction "thou shalt not kill". The pontiff has repeatedly said that Christian-Muslim dialogue is the only way to overcome Islamist militants who have persecuted Christians and driven them from their 2,000-year-old communities in Iraq and Syria and are now hitting them in Egypt. His message carried special resonance inside Al-Azhar, where he is a guest of its Grand Imam, Sheikh Ahmed al-Tayeb, widely considered among the most moderate clerics in Egypt. In his speech, Tayeb said militants had "carelessly" and "ignorantly" misinterpreted religious texts. "Islam is not a religion of terrorism," he said. Tayeb has faced criticism from within Egypt's parliament and sections of the media, who say Al-Azhar is an ossified institution whose clerics have resisted pressure from Sisi to modernise their religious discourse. Francis stressed the importance of strong education. "To counter effectively the barbarity of those who foment hatred and violence, we need to accompany young people," he said. Tayeb visited the Vatican last year, restoring relations with the Roman Catholic Church after they had been cut in 2011 in protest at what Egyptian Muslim leaders said were repeated insults directed at Islam by Francis's predecessor, Pope Benedict. The pope has been applauded by moderate Muslims for his efforts to improve relations. He has washed the feet of Muslims during Holy Week ceremonies and last year brought Syrian Muslim refugees back to Italy with him from a Greek migrant centre. His visit to Cairo is also aimed at bolstering sometimes frosty relations with Coptic churches, and he will meet Pope Tawadros II, head of the Coptic Orthodox Church who narrowly escaped a church bombing in Alexandria this month. He will also go to Cairo's largest Coptic cathedral to pray for the 28 people killed in a Christmas season blast last year and lay flowers in their memory. Copts represent about 10 percent of Egypt's 92 million population.