Pope says he hopes to find common ground with Trump 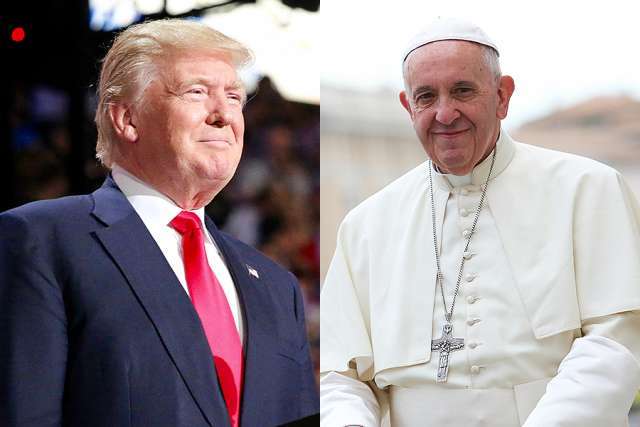 Vatican City: May 14, 2017. (CNA/EWTN News).- In a press conference on Saturday, Pope Francis voiced hope that he will find “open doors” in his meeting with U.S. President Donald Trump later this month,

saying he never judges another person’s views until he hears them for himself. Pope Francis and President Trump will meet at the Vatican on May 24. The two have been at odds on some issues in recent months. During the in-flight press conference returning from Fatima to Rome on May 13, a reporter asked Pope Francis his opinion about President Trump’s policies on issues such as immigration and climate change. The Pope responded, “I never make a judgment of a person without listening to them. I believe that I should not do this. In our talk things will come out, I will say what I think, he will say what he thinks, but I never, ever, wanted to make a judgment without hearing the person.” Further questioned on what he expects from a meeting with a head of state who hold public opinions very different from his own, the Pope responded, “Always there are doors that are not closed. Look for the doors that are at least a little bit open, enter and talk about common things and go on. Step by step.” “Respect the other, say what you think, but with respect, walk together,” he added. “Do you hope to soften his decisions after the meeting?” the reporter asked. “This is a political calculation that I do not permit myself to make,” the Pope replied. The pontiff also answered a question about the resignation of clerical abuse survivor Marie Collins, who in March stepped down from her post on the Pontifical Commission for the Protection of Minors, citing frustrations with “a lack of cooperation” by the Curia as leading factor. A laywoman from Ireland, Collins had been one of two clerical abuse survivors tapped to join the commission when it was established in March 2014. Pope Francis said that he had spoken to Collins, and that she had some justification for her frustration. “Because there are so many late cases, then in this period of lateness, because they accumulate there, you have to make legislation for this... what should the diocesan bishops do?” The fact that nearly all dioceses have a protocol to follow for abuse allegations is “a great improvement,” he said. Still, the process is lengthy and can get delayed or even sent back if proper protocol has not been followed. The addition of more capable people to process accusations is an important step in fixing these delays, the Pope said. He also pointed to his creation of a new tribunal, led by Archbishop Charles Jude Scicluna of Malta, who has a strong record of fighting clerical sex abuse. In the interview, Pope Francis also reiterated his openness to a personal prelature for the SSPX and voiced skepticism over the alleged continuing apparitions at Medjugorje, although he clarified that the original apparitions deserve further study.