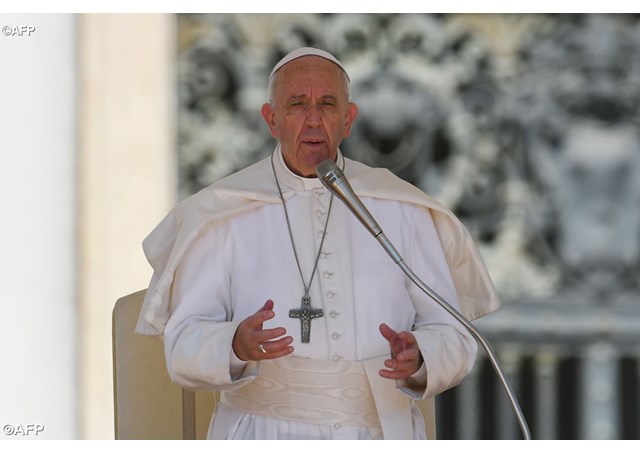 Vatican City: May 17, 2017. (Vatican Radio) Pope Francis continued his catechesis on “Christian Hope” at his General Audience on Wednesday, focusing this week on the figure of St Mary Magdalene.

The Holy Father’s reflections were based on a passage from the Gospel of St John, which relates how St Mary Magdalene was the first to see Jesus after His Resurrection. Her visit to Jesus’s tomb, the Pope said, mirrored “the fidelity of so many women” who visit cemeteries to keep alive the memory of those who have passed away. “The most authentic bonds,” he said, “are not broken even by death.” Pope Francis noted that Mary Magdalene’s first visit to the tomb was a disappointment: Seeing the empty tomb, she went to the place the disciples were hiding and told them that someone had stolen the body of Jesus. But although she was sorrowful, she returned to the sepulchre. The Pope continued, “It was while she was standing near the tomb, with eyes filled with tears, that God surprised her in a most unexpected way.” She hardly noticed the two angels who spoke to her, and at first she did not even recognise Jesus, whom she took to be a gardener. Instead, Pope Francis said, “she discovers the most shocking event in human history” only when Jesus “calls her by name.” “How beautiful it is to think that the first apparition of the Risen One – according to the Gospels – should occur in such a personal way!” the Pope said. How beautiful it is “that there is someone who recognizes us, who sees our suffering and disappointment, and is moved for our sake, and calls us by name.” Although many people seek God, he said, the “wonderful reality” is that God has sought us first, and sought each of us personally. “Each one of us,” Pope Francis said, “is a story of the love of God. God calls each of us by name.” When Jesus said Mary’s name, her life was changed. “The Gospels describe Mary’s happiness for us,” the Holy Father said. “The Resurrection of Jesus is not a joy given with an eyedropper, but a cascade, a waterfall that fills our whole life.” Pope Francis called for everyone to reflect on that fact that, even with all the “disappointments and defeats” in our life, “there is a God who is close to us and who calls us by name, who says to us, ‘Arise, don’t cry, because I have come to set you free.’” God, he continued, “is a dreamer: He dreams of the transformation of the world, and has realised it in the mystery of the Resurrection.” Saint Mary Magdalene, who, before she met Jesus, was at the mercy of the evil one, became “the apostle of the new and greatest hope.” Her life was changed because she had “seen the Lord.” Mary’s experience is an example for us, too, whose lives are changed because we have seen the Lord. This, Pope Francis said, “is our strength, and our hope.”