Pope Francis to New Evangelization: we are made for mission 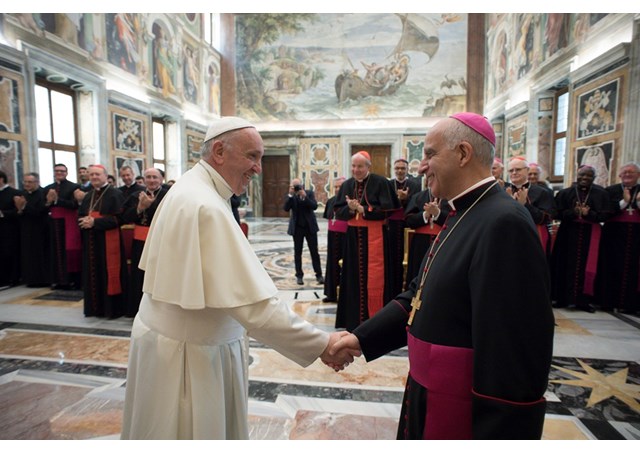 In remarks prepared for the occasion, and delivered to participants during the course of an audience that began shortly before noon in the Consistory Hall of the Apostolic Palace in the Vatican, Pope Francis reflected particularly on the Extraordinary Jubilee Year of Mercy that ran through 2016, under the direction of the Council, calling the Holy Year a “moment of grace that the entire Church lived with great faith and intense spirituality.” The Holy Father went on to say that the present moment is one in which to harness the energy of that grace-filled year. Harnessing the energy of the Year of Mercy “We cannot permit,” he said, “that so much enthusiasm be diluted or forgotten,” noting also that the whole People of God felt the gift of mercy strongly, rediscovering in particular the Sacrament of Reconciliation as a privileged place in which to experience the goodness and tenderness of God, along with His boundless foregiveness. Speaking specifically to the mission of evangelization, Pope Francis stressed that it is one, which belongs to the whole People of God and to each individual Christian, according to his or her state of life in the Church, and with special regard to the contribution that the individual peoples and the respective cultures offer to the journey of the People of God. Power of the Gospel to transform and renew cultures “From every people towards which we go there emerges a wealth that the Church is called to recognise and value to bring to fulfilment the unity of ‘all the human race’ of which it is a ‘sign’ and ‘sacrament’,” he said, invoking the Dogmatic Constitution of the II Vatican Council on the Church, Lumen Gentium. Pope Francis also explained that the evangelising nature of the People of God – and of every people transformed and penetrated by the Gospel of Christ – brings with itself an awareness of an appeal that transcends individuals, who find themselves and the message of which they are carriers inserted in a complex weave of interpersonal relationships, “which enables the experience of the profound unity and humanity of the community of believers.” “[T]his,” he said, “applies in a particular way in a period such as ours, in which we are forced to face a new culture, the fruit of technology that, while it fascinates us for the conquests it offers, it makes equally evident the lack of a true interpersonal relationship and interest in the other.” Recovering missionary élan The Holy Father concluded his remarks with a reflection on the urgency of the task of recovering the missionary élan in which the Church was founded. “Dear brothers and sisters,” he said, “the new phase of evangelisation that we are called to journey through is certainly the work of all the Church, the people journeying towards God: rediscovering this horizon of meaning and concrete pastoral practice will be able to promote the impetus to evangelisation itself, without forgetting its social value, for a genuine integral human promotion.”