We see Jesus in the children of the Middle East. Pope Francis 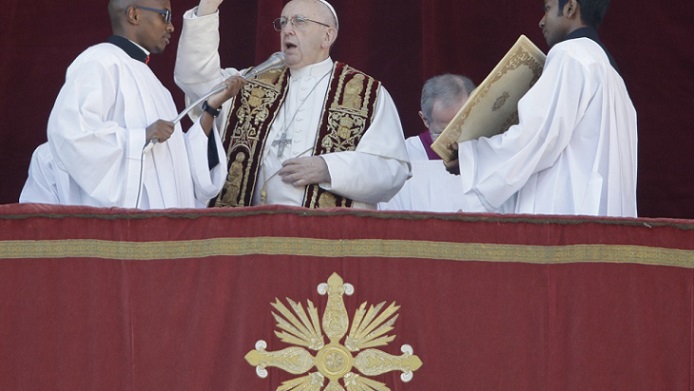 Vatican City: December 26, 2017. Francis delivers the Urbi et Orbi (Latin for ' to the city and to the world' ) Christmas'

day blessing from the main balcony of St. Peter's Basilica at the Vatican, Monday, Dec. 25, 2017. CREDIT: AP Photo/Alessandra Tarantino Pope Francis dealt a sharp rebuke to President Donald Trump in his annual Christmas message on Monday, hitting the U.S. leader on immigration and calling for a peaceful resolution to the Israeli-Palestinian conflict. In his “Urbi et Orbi” speech (“to the city and the world” in Latin), the leader of the world’s 1.2 billion Roman Catholics took aim at Trump’s controversial decision to formally recognize Jerusalem as the capital of Israel and lay the groundwork to move the U.S. embassy from Tel Aviv to the holy city. “Let us pray that the will to resume dialog may prevail between the parties and that a negotiated solution can finally be reached, one that would allow the peaceful coexistence of two states within mutually agreed and internationally recognized borders,” Francis said from the balcony of St. Peter’s Basilica. Governed by Israel since 1967, Jerusalem is considered an independent city under international law, and no country currently maintains an embassy in the city. Many Palestinians claim East Jerusalem as the capital of a future Palestinian state, while Israel’s far-right nationalist government contends that the city is Israel’s capital. Under the 1995 Jerusalem Embassy Act, the U.S. embassy must be relocated to the city or risk losing State Department funding — unless the president opts to waive the requirement due to security concerns, as every president has done since. After wavering for months, Trump declared the city Israel’s capital two weeks ago, indicating that the embassy would be moved as soon as possible. That decision ignited uproar and sparked protests around the world. Leaders of numerous countries condemned the move and the U.N. voted overwhelmingly to nullify Trump’s announcement in an emergency session last week by a margin of 128 to 9, with 35 abstentions. That show of opposition comes in the midst of spiraling violence in Israel and the occupied Palestinian territories. Several people have died in clashes following Trump’s decision, and a number of prominent Palestinian activists have faced questioning and arrest, including young children. Following the initial U.S. announcement earlier this month, Francis harshly rebuked Trump — a critique he repeated on Christmas Day. “We see Jesus in the children of the Middle East who continue to suffer because of growing tensions between Israelis and Palestinians,” the pope emphasized. Trump wants to move the U.S. embassy in Israel. Doing so would have disastrous results. The decision would further exacerbate an already tense situation. He didn’t stop there. The pope has long called for both increased aid to refugees and progressive immigration reform, a plea he repeated on Monday. Pointing to children suffering in countries like Syria, Iraq, and Yemen, where ongoing war has claimed thousands of lives and ripped families apart, Francis made an appeal to the world, particularly Catholics. “Christmas invites us to focus on the sign of the child and to recognize him in the faces of little children, especially those for whom, like Jesus, ‘there is no place in the inn,’” he said, later adding, “Jesus knows well the pain of not being welcomed and how hard it is not to have a place to lay one’s head.” The pope also called for compassion towards religious minorities, saying he had seen Jesus reflected in the Rohingya refugees he met on recent trips to Myanmar (also called Burma), and Bangladesh, where thousands of the Muslim minority community have fled persecution and violence. Francis himself was criticized after bowing to pressure and declining to say the word Rohingya while in Myanmar last month. The papal speech also touched on a number of other topics, including rising tensions between North Korea and the United States. “Let us pray that confrontation may be overcome on the Korean Peninsula, and that mutual trust may increase in the interest of the world as a whole,” Francis said. He also referenced environmental issues and the spiraling political crisis in Venezuela. Monday’s speech is not the first time the leader of the Catholic church has clashed with Trump. The president has repeatedly sparred with the pope, criticizing the religious figure as a “very political person.” Francis himself has appeared to critique Trump on a number of issues, particularly immigration. Early last year, the pope bluntly panned the president’s threats to build a wall on the U.S.-Mexico border. “A person who thinks only about building walls, wherever they may be, and not building bridges, is not Christian,” Francis said. “This is not the gospel.”