Pope Francis arrives in the kingdom of Morocco 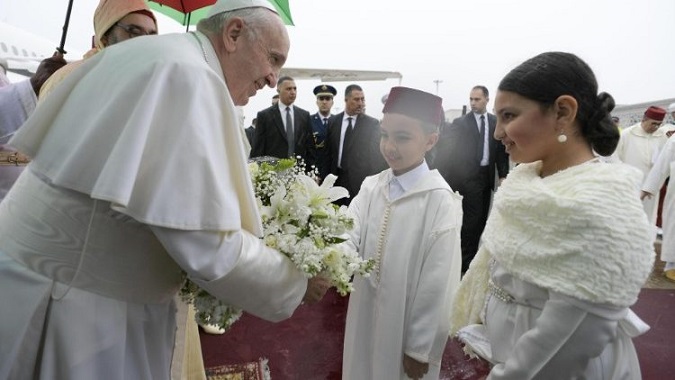 Rabat: March 30, 2019. (Vatican News) Pope Francis arrives in the Kingdom of Morocco on his first-ever visit to the Maghreb region of Northern Africa, and receives a warm welcome to the mainly-Muslim country.

In Africa, rain is always a good sign. Pope Francis landed at the Rabat-Salé airport shortly before 2pm to a rather wet and rainy day. He was met at the foot of the plane by His Majesty King Mohammed VI, for a very brief ceremony of greeting.

The rains did not dampen spirits of the people here. The King and his entourage were wearing traditional Moroccan attire known as djellaba.

While in the UAE, the Pope and the Grand Imam of al-Azhar, Ahmed el-Tayeb, signed an historic document that pledges peace between nations, religions, and races. The declaration further affirms its opposition to extremism.

The visit to Morocco is therefore yet another opportunity for Pope Francis to continue building bridges between Christians and Muslims.

However, the Pope will also visit a small group of African migrants representing the many in the country.

The pastoral gesture of visiting migrants is also seen as the Holy See’s support reaffirmation of the Global Compact for Safe, Orderly and Regular Migration agreed upon by over 160 countries last December in Marrakech, Morocco.

The pact holds affirms that migration is a natural phenomenon that happens all the time all over the world and that, if it happens legally, is a good thing.

Apart from that, the weekend visit of Pope Francis is full of symbolism, including the fact that the small Catholic community in Morocco is commemorating, with the whole universal Church, the 800th anniversary of the encounter between St. Francis and Sultan al-Malik al-K'mall.

In other words, the “culture of encounter” Pope Francis seeks to foster has a deep history.