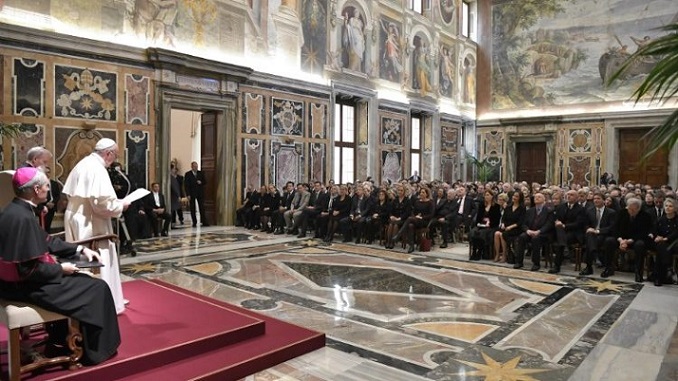 Meeting some 400 journalists of the Foreign Press Association of Italy on May 18, Pope Francis urged for a humble and free journalism.

Vatican City: May 19, 2019. (Vatican News) Pope Francis is encouraging a humble and free journalism that does not indulge in selling the “rotten food of misinformation” but rather offers the healthy bread of truth and goodness.

Pope Francis expressed his and the Church’s esteem for their precious work, saying it “contributes to the search for the truth, and only the truth makes us free.”

Underscoring humility as the fundamental element of their profession, the Argentine Pope said that the search for truth entails many difficulties and much humility.

The presumption of already knowing everything, he said, blocks the search for truth.  An article, a tweet or a live report, he said, can do good but also evil to others and sometimes to entire communities if one is not careful and scrupulous.

Noting that certain "screaming” headlines can create a false representation of reality, he urged journalists to resist the temptation to publish news that has not been sufficiently verified.

Instead, he said, the humble journalist tries to know the facts correctly and completely before telling and commenting on them.  Such a journalism does not feed "the excess of slogans that, instead of setting the thought in motion, cancel it out".

The Pope lamented the use of violent and derogatory language that hurts and sometimes destroys people. In a time of too many hostile words, in which saying bad things about others has become a habit for many, along with that of classifying people, we must always remember that each person has his or her intangible dignity, which can never be taken away.

At a time when many people are spreading fake news, “humility prevents you from selling the rotten food of misinformation and invites you to offer the good bread of truth.”

On the side of victims

Emphasizing that “freedom of the press and of expression is an important indicator of the state of health of a country,” the Pope shared the pain of journalists killed while carrying out their work with courage and dedication to report on what many people face during wars and the dramatic situations.

He called on reporters to help the world not to forget those persecuted and discriminated against for their faith or their ethnicity and the victims of violence and trafficking in human beings.  He said those forced to leave their homes because of disasters, wars, terrorism, hunger and thirst, are not numbers, but a face, a story and a desire for happiness.

“There is a submerged ocean of goodness that deserves to be known and that gives strength to our hope,” Pope said, noting that women journalists are particularly sensitive to such stories of life.

At the end of his talk, Pope Francis gifted the journalists a copy each of a book entitled, “Communicare il Bene” (Communicating the Good), containing his talks to various groups of journalists and his messages for World Communications Days.