Children of the World Unite: Raise Your Voice against Mindless Pursuit of Nuclear Power. By Shobha Shukla 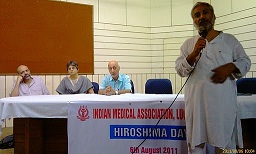 This was the message that came out loud and clear, during a lively seminar: Lessons from Japan on ‘Nuclear Radiation Health Hazards’ held on 6th August at IMA Bhawan in Lucknow on the occasion of Hiroshima Day. It was the culmination of a month long campaign titled Lessons from Japan, which focused attention on issues around peace, nuclear disarmament and clean energy options, by holding interactive dialogues with the students of various educational institutions.
Lessons From Japan was jointly organized by Dr Ram Manohar Lohia Institute of Medical Sciences , Indian Medical Association Lucknow, Lucknow Management Association, Asha Parivar, National Alliance of People’s Movements (NAPM), Jahangirabad Media Institute, Coalition for Nuclear Disarmament and Peace (CNDP), Indian Doctors for Peace and Development (IDPD), Youth Forum, MASVAW, and Citizens For Healthy Lucknow (CHL) Campaign.
The department of New and Renewable Energy Development Agency of Uttar Pradesh Government (NEDA) also participated in the seminar and Namrata Kalra from NEDA spoke on energy alternatives.
As part of this campaign, more than 100 students of around 11 city schools made poster exhibits, depicting the devastating effects of nuclear arms, and the need for eco friendly sources of energy for a peaceful world free from nuclear hazards. These posters were displayed at IMA Bhawan, and their scanned copies were sent online to be displayed at a slideshow at the World Conference Against Atom and Hiroshima Bombs in Hiroshima, Japan.
Dr Achin Vanaik from Delhi University, Dr Satyajit Rath and Dr Vineeta Bal from National Institute of Immunology, Indian Council of Medical Research (ICMR); Dr Arun Mitra, ENT Surgeon from Ludhiana and national President, Indian Doctors for Peace and Development (IDPD), Dr Sudhir Dhakre, Pulmonary Medicine Physician and national secretary IDPD, and Dr Sandeep Pandey, Magsaysay awardee and visiting faculty at Indian Institute of Technology (IIT) Gandhinagar, were some of the prominent speakers at the event which was attended by a large number of students and teachers.
A film ‘Buddha Weeps in Jadugoda’ directed by noted filmmaker Shri Prakash, was also shown on the occasion. The film is a telling commentary on the painful experiences of the Adivasis of Jadugoda—a uranium mining area in Jharkhand, as the impact of thirty years of radiation dumping manifests itself in the form of disabilities, congenital defects in new born, cancer and other diseases.
All the speakers at the seminar pleaded for a nuclear free world. They stressed upon the damaging effects of the nuclear weapons and nuclear energy. Dr Vanaik said that there is no good purpose of nuclear weapons as they result in mass destruction, sparing no one, not even innocents who are not directly engaged in warfare. They go against all ethical codes of conduct in a war where no one has the right to kill innocents. He termed the bombing of Hiroshima as the biggest terrorist act in the history of humanity, as it killed more than 1 lakh people almost instantly.

Very often the argument given in favour of the atom bomb is that it is for the country’s defence and security. But the bomb actually breeds revenge and not defence. The more atom bombs there are in the world, the more insecure a place it becomes. Science and morality should go hand in hand. Moral sensitivity and social consciousness is needed to tread the path of nuclear disarmament. The bombs dropped in Hiroshima and Nagasaki were called ‘Little Boy’ and ‘Fat Man’—such innocent names for such hideous devices. India named its first nuclear test in 1974 the Smiling Buddha, which is an insult to the peace loving Buddhist religion.
Nuclear disarmament should include getting rid of nuclear energy, as nuclear energy leads the way to the bomb. It is in the interest of humanity that we develop solar, wind, tidal wave energy to meet our needs. Dr Vanaik felt that ‘Nuclear energy is too little (can solve only 13% of the world’s energy needs); too late (a reactor takes almost 10 years to build); too expensive (as compared to other sources); and above all too dangerous (disposal of radioactive waste poses a big problem and is a serious health hazard. So if we have to remove nuclear weapons we will have to get rid of nuclear energy too.’
Dr Vineeta Bal spoke on the health effects of radiations. She said that chronic or long term exposure to radioactive rays through air, water, crops grown, and animals reared in the mining areas results in, amongst other hazards, genetic mutation which is transmitted from generation to generation. Women and children bear the greater brunt of all this, as infertility and cancer are the two common consequences of this. Nuclear energy can never be green energy. Dr Satyajit termed the nuclear radiations as silent killers. They are invisible, have no smell and cannot be heard and so are all the more dangerous.
Dr Satyajit exhorted the youth to view nuclear energy from the point of social equality. The nuclear energy issue is a part of the existing social and political malaise, which gives too much to very few and very less to most of the people. Nuclear energy also remains unaffordable to a large majority, to solve their basic energy needs, and can only be used to meet the ever increasing energy needs of a select few. We need to think about social policies and not merely nuclear energy. So let us work together to bring about a change.
Dr Arun Mitra pleaded for education and food for all children of the world instead of mindless spending on nuclear weapons and energy. He said that war deprives children of play and studies. The use of nuclear weapons increases the intensity of war which traumatizes children and renders them homeless and parentless. He lamented the mindless spending on arms while thousands of children die of hunger every day. He affirmed his faith in the persuasive power of children and exhorted them to raise their voices to spread the message of peace.
Let all of us lend our voices and efforts to spearhead this revolution to make our earth clean and green, and free from the hazards of nuclear power. (CNS)
(The author is the Editor of Citizen News Service (CNS). She is a J2J Fellow of National Press Foundation (NPF) USA. She is also the Director of CNS Gender Initiative and CNS Diabetes Media Initiative (CNS-DMI). She has worked earlier with State Planning Institute, UP. Email: shobha@citizen-news.org, website: http://www.citizen-news.org/)