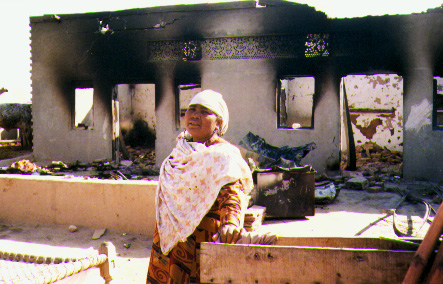 On 17th January 1997, seven policemen raided the house of Baba Raji of Shantinagar. According to the police officers they come to know that in that very house some people were involved in gambling and the sale of liquor. Nothing was found there. During the operation the Police threw the holy Bible on the floor and did not allow Baba Raji to pick it up. The Christian people of the village and other village took out a procession against the police officer. The DSP Ghumman personally went to Shantinagar for the matter to be settled against the policemen who were involved in desecrating the Bible. The Christians knew that while the case was in the court they could do nothing. At that time the DSP threatened the people that if they refused to accede to his request to withdraw the case they would face dire consequences.
On 5th February 1997, according to the Muslims a Holy Quar’an was found torn in a mosque situated about one mile away from Shatinagar. The maulvies (Muslims religious leaders) state the Holy Qur’an was found torn into pieces and the names of some Christian people were written on the pages. The maulvies started announcing the news about the Holy Qur’an and been instigating the people. They said that the Christians must be punished for doing this. When Shantinagar Christians heard this they informed the police.
On 6th February 1997 at about 9:00 a.m., 30,000 to 35,000 militant Muslims attacked a Shantinagar (land of peace), located 10 kilometres south-east of Khanewal city. Attackers were equipped with various types of weapons, in the presence of 400/300 policemen. Shantinagar is a Christian village of 15,000 to 20,000 people, with some Muslims also living here. Along with many churches a mosque is also located here.
Before the attack by the Muslim mob, the Christians of Shantinagar asked the policemen to stop the big crowd, which had gathered outside the village. Police told the Christians that this procession will pass peacefully through this village. When the crowed came near the village the police did not take any action and asked the Christians to vacate their houses and run away or hide themselves inside of their houses, The police asked the Christians not to come outside.
When the Muslim mob entered the village, they were with rifles, guns, pistols, daggers, sticks hand made bombs and other flammable chemicals. First they disconnected the electricity and destroyed the main transformers of the village. The telephone connection of the public call office was also disconnected by the procession. While destroying the village they destroyed hand-pumps, donkey pumps and also deep well pumps. About 75 to 80 percent of the village was destroyed. The attackers took away all the precious things with them. Gold, ornaments, TV's, VCR's, refrigerators, clothes, costly beddings etc. Whatever they wanted. They picked up with them, but the rest were collected in the rooms or in the courtyards and put on fire. The Muslim mob even used bombs (the bomb shells were found in the ashes of the houses) and white chemicals to burn the houses. They put tractors, motorcycles and cars on fire. They also burnt and stole many animals. They burnt churches, schools, dispensaries and thousands of Bibles. The Christian victims saved their lives by hiding themselves in the concerns of the rooms or by keeping out of their houses.
When the district administrator called the army, the local police officer misled them. So the army went in the wrong direction thus wasting precious time. The police then delayed giving charge to the army to provide more time to the attackers to destroy more houses. From outside of the village the army saw smoke, coming through the houses but the police told the army that this smoke was from the burning of the tires. Realising the seriousness of the incident, the army rushed into the village without proper permission of the police. When 15 armymen entered the village, the attackers started running away. The army caught some of them and handed them over to the police but later on the police released them. According to the Christians, the police and the local administration of Khanawal were directly involved in this incident.
Khanewal
Before the destruction of Stantinagar, on 5 February at about 11:00 p.m. Muslims attacked Saint Joseph’s Church, the parish house (residence of Catholic priest), Saint Joseph’s High School and the boy’s hostel. One day before this incident, Father Darshan Theodore informed Mr. Athar Hasseb, Deputy Commissioner of Khanewal and Dr Parvez, Additional Deputy Commissioner (General) of Khanewal. But they did not take it seriously. On February 6, morning, about 200 Muslim people were not stopped. They also attacked the Protestant Church, the Churches of the Salvation Army and a Christian Colony of Civil Lines Khanewal. They burnt shops and houses and also beat people.
Other Villages
After these incidents in many other villages Muslim people attacked churches and Christian-Muslim tension at that time was at its peak. Through the intervention of the army on the move, the situation was brought under control.