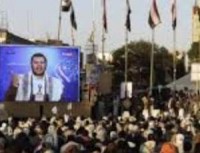 Houthi Shia fighters entered the vacuum in this nation because of the rampant corruption of the former leaders, systematic anti-Shia persecution, the genuine threat of al-Qaeda affiliates, the intrigues of regional feudal monarchies and other important factors. This reality upset Saudi Arabia and other feudal Gulf monarchies because they desire the status quo, rampant poverty, to pull the political strings and a nation state that marginalizes the Shia. However, the Houthi movement, despite being open to talks to stem the crisis, doesn’t want to capitulate to the whims of Riyadh.
President Obama, and political elites within the Democrats and Republicans, is once more rubber-stamping the brutal bombing campaign being led by Saudi Arabia against the people of Yemen. In other words, while al-Qaeda affiliates and suddenly with ISIS (Islamic State – IS) emerging in growing strength in Yemen, the US is once more enacting a very estranged foreign policy in order to appease Riyadh. Yet, surely it make no sense for America to support the bombing attacks against Houthi Shia forces because this movement is the strongest military might that can challenged al-Qaeda and ISIS in Yemen. Therefore, America should be thinking about the bigger picture rather than assisting Saudi Arabia with its geopolitical anti-Shia intrigues.
On top of this, the Houthi Shia movement isn’t a threat to America and surely it is in the interest of America to develop closer ties with Iran. Despite the rhetoric of certain elements within America, Israel, Kuwait, Saudi Arabia – and others – against Iran, it is abundantly clear that ISIS, al-Qaeda, al-Shabaab, Boko Haram, al-Nusra, and many others, all belong to the Sunni Takfiri sectarian brigade of terrorism. This reality needs to be focused on more sincerely because in Syria the Alawites and Christians face the sword of Sunni Takfiri Islamist forces. Similarly, in Iraq it is radical Takfiri Sunni Islamists that are slitting the throats of Christians, Shabaks, the Shia, Yazidis and the mainly Sunni Muslim Kurds. Given this reality, elites in Washington need to realign themselves with forces that support the mosaic rather than assisting Takfiri Islamists, Gulf intrigues and the whims of Turkey under Erdogan that are collectively supporting sectarianism and religious cleansing.
Iran also needs to take a more pro-active foreign policy approach because Gulf feudal monarchies and Turkey are all assisting anti-Shia forces in several nations. At the same time, the mosaic in Syria is being threatened by Gulf feudal states and Turkey therefore the line in the sand in Yemen should be the final straw. After all, it is clear that in Bahrain, Iraq, Syria and Yemen that anti-Shia forces are at play based on the whims of regional powers and the intrigues of Ankara.
It is clear that Kuwait, Qatar, Saudi Arabia and Turkey all believe that they are above international law. At the same time, the above nations believe that they will be protected by America. Therefore, NATO Turkey is a happy conduit for Takfiri Islamists sectarian forces that seek to enter Syria and Iraq. Likewise, Gulf powers and Turkey under Erdogan are assisting various terrorist forces irrespective if central based funding or because of turning a blind eye. Either way, the result is the same and this applies to their collective regional anti-Shia policy that utilizes the fear of Iran even when it doesn’t exist.
Patrick Cockburn, The Independent, states: “The Syrian government last week accused Turkey of helping thousands of jihadi fighters to reach Idlib and of jamming Syrian army telecommunications, which helped to undermine the defences of the city. The prominent Saudi role in the fall of Idlib was publicised by Jamal Khashoggi, a Saudi journalist and adviser to the government, in an interview in The New York Times. He said that Saudi Arabia and Turkey had backed Jabhat al-Nusra and the other jihadis in capturing Idlib, adding that “co-ordination between Turkish and Saudi intelligence has never been as good as now”. Surprisingly, this open admission that Saudi Arabia is backing jihadi groups condemned as terrorists by the US attracted little attention. Meanwhile, Isis fighters have for the first time entered Damascus in strength, taking over part the Yarmouk Palestinian camp, only ten miles from the heart of the Syrian capital.”
Syria is once more facing another brutal attack against its sovereignty that continues with fresh pushes against the secular government based in Damascus. This reality is never ending because Gulf powers and Turkey refuse to relent in their pro-al-Qaeda and ISIS war against Syria. Iraq is obviously a clear victim and the same applies to religious minorities like Christians, Shabaks and Yazidis. Therefore, it is time for America to distance itself from nations that are openly siding with al-Qaeda elements and brutal sectarianism. At the same time, Iran must do more against the enemies of the Shia because the intrigues of Gulf powers and Turkey don’t fear any major repercussions.
http://www.independent.co.uk/voices/a-young-prince-may-cost-syria-and-yemen-dear-10156167.html
http://moderntokyotimes.com Modern Tokyo Times – International News and Japan News
https://moderntokyonews.com Modern Tokyo News – Tokyo News and International News
http://global-security-news.com Global Security News – Geopolitics and Terrorism