Early diagnosis of drug resistance is crucial to ending TB. By Shobha Shukla 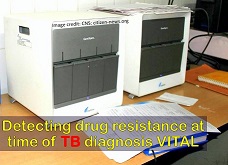