Now PM Sharif must take the lead on Mumbai attacks. By Farooq Ganderbali 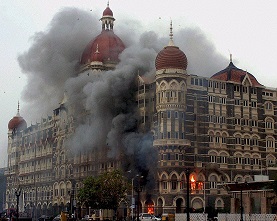 It took almost seven years from someone in Pakistan to muster courage to stand up and admit that the terrorists who carried out the Mumbai attacks in November 2008 came from Pakistan and that the terrorist act was planned from Pakistan. The confession came from a former police officer, Tariq Khosa, who headed the investigations into the attack. He wrote in a newspaper article that `` Pakistan has to deal with the Mumbai mayhem, planned and launched from its soil. This requires facing the truth and admitting mistakes. ``
Khosa is neither a fame-seeking journalist nor a rabble rouser. He is a retired police officer, by all accounts an upright one and a good investigator going by what he has to say about the Mumbai attacks and the investigations. In Khosa’s admission, Prime Minister Nawaz Sharif has a unique opportunity to rewrite history. He can admit that the terrorist attack was carried out from terrorist and those who carried out the attack were not punished as they should have been. He can also state that there are others like Hafiz Saeed who remain free and need to be tried for terrorist activities. The beleaguered Premier has nothing to else but the blot of being an inept and failed leader. The question is whether Prime Minister Sharif has the courage to take up the challenge?
Khosa, a former head of Federal Investigating Agency, the premier investigating agency, has left no one in doubt that Pakistan must own up the responsibility both for letting the attack take place, letting the attackers go scot free and not coming down heavily on those arrested. One of the key accused, Zaki-ur Rahman Lakhvi, was freed on bail a few months ago. The state has so far refused to appeal against his bail order. In fact, if media reports were to be believed, the state is highly unlikely to do so. Prime Minister Sharif surely has the power to undo this gross error on the part of his government’s prosecution agency.
Officer Khosa gives out quite few details of the investigations which he and his team members carried out after the attack. Prime Minister Sharif would have by now noticed that the evidence which his own investigating agency had clearly confirmed what India had been telling Pakistan since the attack. Every time India raised the subject of Mumbai attacks, the standard Pakistani response had been that all the dossiers which India had given to them contained `information` and `intelligence` which could be utilised for investigating the attack and its perpetrators. Khosa has proved that Pakistan knew all along that the attack clearly had the sign of ``Made in Pakistan``. This clearly proves that Prime Minister Sharif and his government were complicit in keeping the facts hidden from the world. The Prime Minister must now make amends.
This is what Khosa has admitted to. One, he said, there was no doubt that Ajmal Amir Kasab, one of the ten who carried out the attack, was a Pakistani national and there was enough proof to confirm it. In the days after the attack, Pakistan had denied, and continued to deny it for several months, that Kasab was a Pakistani.
The most significant aspect of this admission was that Khosa’s team had unearthed evidence of Kasab joining Lashkar-e-Tayyeba (LeT), the terrorist group wanted for the Mumbai attack. Pakistan has so far denied, and continue to deny, that LeT was involved in the attack. It has allowed LeT to operate freely in Pakistan under different but not secret names and has allowed its leader Hafiz Saeed to continue with his jihad against India. Lakhvi, whom Pakistan refuses to try under its anti-terrorism laws, was the operational commander of LeT who masterminded the attack on Mumbai. Khosa’s admission now put the ball in the court of Pakistan to prove that LeT was not involved in the attack. Prime Minister Sharif can lessen the pain and effort by ordering a visible and clear clamp down on the group without any further delay. If Malik Ishaq, the notorious head of violent Lashkar-e-Jhangvi, could be eliminated without much public outcry, Hafiz Saeed could also be dealt with without much fuss.
Khosa has more to say on the evidence which makes Pakistan look really bad in the eyes of the international community. He said his team had evidence, and now this is the evidence which can be used in a court of law, that LeT had a training camp in Thatta, Sindh and the attackers had begun their journey from there. He further wrote that the investigating team had gathered substantial material evidence-- casings of the explosive devices, trawler used in the attack, engine of the dinghy, besides the money trail. His team even tracked down a couple of foreign-based financiers and facilitators and brought them to trial. It is ironical that while political leaders like Prime Minister Sharif were claiming that the state had no knowledge of the terrorist planning, officer Khosa and his men had enough evidence to nail a house full of jihadis.
Prime Minister Sharif and government perhaps can take some advice from Khosa. This is how he said progress could be made in putting to rest this case. `` Dilatory tactics by the defendants, frequent change of trial judges, and assassination of the case prosecutor`` were some of the reasons for the delay in punishing the accused. Prime Minister Sharif could do change all this by sampling telling his prosecuting agency to make a fool-proof against all the accused, including Lakhvi and set the deadline for completing the trial. He need not consult the army headquarters for this. He has good men like Khosa on his side.
However, Khosa’s disclosures were followed by an expected U-turn by him, which only confirms the obvious.