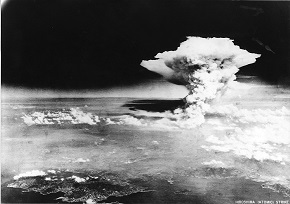 The world observed last month the 70th anniversary of the atomic bombing of the Japanese cities of Hiroshima and Nagasaki. At the final stage of the Second World War, on August 6, 1945 the first nuclear device was detonated by the American military on Hiroshima. Several thousand people died on the spot and lakhs perished subsequently. A few days later, Nagasaki, another bustling Japanese city, was also bombed with a nuclear missile and a similar catastrophic outcome followed. Meetings held across the world last August recalled the unprecedented tragedy of nuclear bombardment and called for a total ban on nuclear weapons and other weapons of mass destruction. In New Delhi, on August 6, Members of Parliament from different political parties and ideologies gathered at the lawns of the Japanese Embassy to pay homage to the victims of Hiroshima and Nagasaki. Nuclear strikes whether deliberate or by accident, can lead to a catastrophic nuclear war. If mankind does not eliminate such weapons then those weapons will destroy mankind, they asserted. In Mumbai, on the same day, more than 2700 students participated in a rally demanding an end to nuclear weapons. The event was organized by the Bombay Sarvodaya Mandal and the Bombay University. The participants pledged to work towards elimination of all nuclear weapons and other weapons of mass destruction. The tragedy wrought by the nuclear weapons in Hiroshima and Nagasaki must never be repeated. Humanity and nuclear weapons cannot coexist, they proclaimed. Similar meetings were held all across the country.
In 1968, the United Nations General Assembly, at the instance of the Western nuclear Powers, who are permanent members of the Security Council, passed the Non-Proliferation Treaty of nuclear weapons commonly known as the NPT with the objective of preventing the spread of nuclear weapons and nuclear weapon technology to countries without such weapons. It recognizes 5 States as nuclear weapon States, the United States, Russia, the United Kingdom, France and China. These countries hold more than 20000 nuclear warheads in their combined stockpile and have shown a reluctance to disarm. The NPT does not prevent the use of nuclear weapons by the nuclear weapon States and hence it does not eliminate the threat posed by such weapons. The Treaty opened for signature in 1968. Neither India nor Pakistan signed the NPT. It was rightly pointed out that piecemeal efforts such as the NPT do not serve any purpose. Nuclear disarmament ought to be to be total and universal. Nuclear weapons and other weapons of mass destruction cost billions of dollars. It has been mentioned that every warship and every rocket is a theft from those who are hungry and have no money to buy food. These enormous amounts should go to remove poverty and improve health and education in the world. In June 1998 our then Prime Minister Shri Rajiv Gandhi submitted a comprehensive “Action Plan for a Nuclear Weapons Free and Non-Violent World” at a special session on Disarmament of the United Nations General Assembly. Rajiv Gandhi termed nuclear destruction “the ultimate expression of the philosophy of terrorism, holding humanity hostage to the presumed security needs of a few”. The United States Government rejected the Rajiv Gandhi Plan apparently as a result of pressure from its military- industrial complex. The arms lobbies are powerful everywhere and particularly in the United States. Government of India should continue to push at the United Nations for international acceptance and implementation of the Rajiv Gandhi Plan for total and universal nuclear disarmament.
At present both India and Pakistan hold nuclear weapons. The two neighbours should engage constructively and find a long term solution for peace and stability in this region. It was unfortunate that a recent meeting of the National Security Advisors of the two countries was cancelled as they failed to agree on the agenda. Pakistan wanted to discuss Kashmir and India wished to focus on terrorism. However, one cannot be discussed without the other. Pakistan pulled out after India’s Foreign Minister asserted that the talks would take place only if Pakistan’s NSA did not meet the Hurriyat leaders. This was rather unrealistic. Meetings of the Pakistani leaders with the Hurriyat have taken place for the last 20 years even during the NDA and UPA regimes. In the exchange of words after cancellation of talks, Pakistan’s National Security Advisor, Sartaj Aziz was quoted by the Dawn newspaper as saying “Modi’s India acts as they are a regional super power. We are a nuclear armed country and we know how to defend ourselves.”
Whilst the two sides have distinct priorities, they should, with a sense of urgency, find ways to resume the composite dialogue and take forward the peace process.
(The writer is a former Union Minister of India)