Promise to end AIDS by 2030: Are we on track? By Shobha Shukla 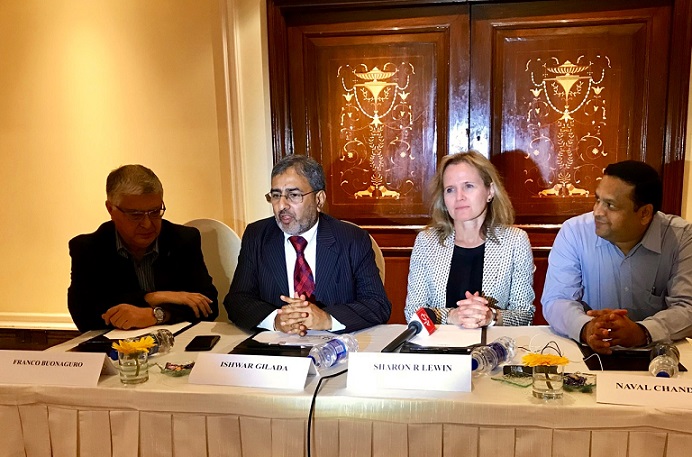 Governments of over 190 nations, including India, have promised to end AIDS by 2030 by adopting the UN Sustainable Development Goals (SDGs). But the current data, trends and experiences of HIV experts pose serious concerns on if we are on track to end AIDS by 2030.
"Since India diagnosed its first case in 1986, we have enough piled up scientific evidence to know what are the proven approaches for preventing HIV transmission and caring for people living with HIV (PLHIV), so that they can live normal lives. But is this a reality on the ground? There is no excuse for inaction lest we may fail to meet promises of ending AIDS" said Dr Ishwar Gilada, President of the AIDS Society of India (ASI) and President of 10th National Conference of ASI (ASICON 2017) which will open in Hyderabad on 6th October 2017 on the theme of: Action, Science and Innovation for ending AIDS.
Promise of 90:90:90: Real or mirage?
The National Health Policy 2017 of Indian government promises to “achieve the global target of 90:90:90, for HIV/AIDS by 2020, that is, 90% of all people living with HIV will know their HIV status, 90% of all people diagnosed with HIV infection will receive sustained antiretroviral therapy (ART) and 90% of all people receiving antiretroviral therapy will have viral suppression” (Source: 2.4.1.3. of National Health Policy 2017 of Government of India). These NHP-2017 goals are in line with UNAIDS commitments too. Despite progress there is a long way ahead of us, if we are to meet these goals.
"We need unprecedented action to meet NHP-2017 goals. As of 2016, 67% of PLHIV (2.1 million/ 21 lakhs) know their status; 1.4 million (14 lakhs) are diagnosed with HIV and 902,868 PLHIV were on life-saving ART (source: WHO SEARO). Not only have we not yet reached out to 33% of PLHIV in the country, but also less than 50% of PLHIV are on ART, despite WHO and NACO guidelines to ‘test and treat all’. Less than 65% of PLHIV who know their status, are receiving ART. We cannot become complacent in our efforts, because failing to reach out to each of the estimated PLHIV and putting them on ART threatens to reverse the progress made in fighting AIDS” said Dr Gilada, who was among the first few doctors in India who came forward for HIV management when the first case got diagnosed in the country.
Scientific evidence has shown that if every PLHIV is on ART, with viral load suppression, the risk of HIV transmission is negligible, and the person can lead a normal healthy life. But in India, with very limited capacity to do viral load testing, it is not known how many of the documented 9,02,868 people on ART are virally suppressed. Viral load monitoring of every PLHIV on ART is necessary, emphasizes ASICON 2017 experts, else how would India meet the goal of achieving viral load suppression for 90% of those PLHIV who are receiving ART by 2020?
Dr Naval Chandra, Co-Chair, ASICON 2017 and Professor in Medicine, Nizam Institute of Medical Sciences, Hyderabad said: "In other states of India number of new HIV infections might have come down, but in Andhra Pradesh and Telangana combined, in last 1-2 years we are seeing a sudden increase in new HIV infection."
Dr Franco Buonaguro, National Cancer Institute, Italy, said that viral hepatitis co-infection in PLHIV is now recognized as a major public health problem resulting in increased morbidity and mortality among PLHIV including those on ART. Nonetheless all PLHIV should be tested for HCV.
Professor Sharon R Lewin, Plenary Speaker, ASICON 2017 and Director, Doherty Institute for Infection and Immunity University of Melbourne, Australia, who is also a member of the Governing Council of the International AIDS Society representing the Asia Pacific region, said: "In Asia Pacific, about 5 million people are living with HIV and about 40% of them are receiving treatment [antiretroviral therapy]." She added that "in Australia we have reached the goal of 90:90:90 but we have not changed the numbers of new HIV infection." She put the spotlight on challenges in HIV prevention and new ways we need to explore to effectively prevent transmission of HIV.
"In India today, almost 80-90% of PLHIV on ART are being managed, not treated, at some 530 ART centres of NACO, and the remaining PLHIV access private healthcare. Retaining PLHIV on ART at public sector ART centres is extremely crucial for managing HIV in India, as they cater to the majority of PLHIV. Clinical studies tell us about efficacy of drugs in a controlled environment, but long-term effectiveness studies are important to corroborate clinical studies’ findings” added Dr Ishwar Gilada.
India had an estimated 86,000 new HIV infections in 2015. Children less than 15 years accounted for 12% (10,400) of total new infections while the remaining (75900) new infections were among adults (over 15 years). The goal to eliminate parent to child transmission of HIV by 2020 also mandates accelerated roll-out of evidence-based measures in India. Countries like Cuba, Thailand among others have already eliminated parent to child transmission of HIV.
Academic partners of ASI include Government of India's National AIDS Control Organisation (NACO), Indian Council of Medical Research (ICMR), Medical Council of India, UNAIDS, Association of Physicians of India, Forum of Parliamentarians on HIV & AIDS, People’s Health Organisation (PHO), CAPRISA South Africa, among others. Over 500 HIV medical experts of various clinical and scientific disciplines from across the country, and other nations including USA and Australia, are taking part in ASICON 2017.
(Shobha Shukla is the Managing Editor of CNS (Citizen News Service) and has written extensively on health and gender justice issues since decades. Follow her on twitter @Shobha1Shukla, website: www.citizen-news.org)