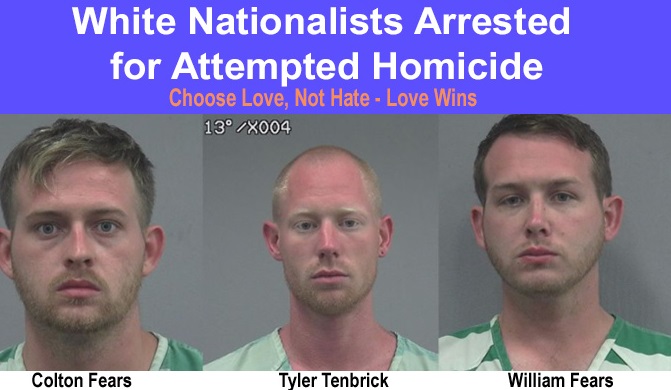 Responsible for Equality And Liberty (R.E.A.L.) condemns and rejects the ongoing pattern of violence and hate that it sees involving extremist events, as well as protests of extremists. A coherent society must reject violence at all such events, before and after such events, and by those participating and those protesting. Those leading such events and those leading protests of such events must take responsibility for condemning such violence without exception.
Responsible for Equality And Liberty does, has, and will continue to condemn and reject the hate of white supremacism, white nationalism, and Nazi ideologies that express reject our shared Universal Human Rights, reject human equality, reject the dignity of others, and that have longed been involved with violence and murder in pursuit of global aims of hate against others. The public must always remember the role of white supremacy in slavery of blacks in America, and the long history of white supremacist persecution and violence against black Americans, which it took a generation to work to change. The public must also always remember the role of Nazi ideology in The Holocaust that murdered 6,000,000 Jewish people, as well as others: people of color, handicapped, gay, Christians, women, Muslims, and groups of other nationalities / ethnic backgrounds. We have challenged such white supremacist, white nationalism, and Nazi ideologies including terrorist violence by such extremists in the United States, including the recent murder of Heather Heyer and injury of 19 in Charlottesville, Virginia by Neo-Nazi supporter James Alex Fields, Jr. using a vehicle, and other attacks we have seen, including the 2009 attack on the U.S. Holocaust Memorial Museum.
Over the years, R.E.A.L. has been a target of threats of violence, hate, and harassment by white supremacists and Nazis, and we continue to get such harassment today. But R.E.A.L. does not respond to hate with hate. We continue to offer an outstretched hand of human rights and compassion, not an upraised fist, to those who are lost, to find their way back to the family of human rights and dignity for all.
Once again, in Gainesville, Florida, we have seen white nationalist public violence, with an attempted homicide by white nationalist extremists supporting an event by National Policy Institute (NPI) white nationalist speaker Richard B. Spencer. A fringe extremist figure since 2009, Richard Spencer’s white supremacist events have been drawing violent individuals and violence over the past nine months in venues across the United States. Richard Spencer has failed to provide any public statement condemning the acts of his white nationalist supporters in this attempted homicide. Richard B. Spencer is president of the NPI, a white nationalist lobbying and activist group based in Alexandria, Virginia, and as R.E.A.L. reported in early 2010, manages an online blog called “Alternative Right” to provide a digital venue for white nationalist ideologues. Since 2009, R.E.A.L. has peacefully protested Richard Spencer and his fellow fringe white nationalists for their rejection of our shared universal human rights.
After the latest Richard Spencer speech at the University of Florida in Gainesville, three white nationalist and Neo-Nazi extremists were arrested in Gainesville, Florida, and charged with attempted homicide, after one of them shot a handgun at a crowd of protesters, reportedly hitting a building. There were no injuries and a bullet from the rifle struck a building. The extremists were all from Texas and traveled to Florida to participate in unrest surrounding a white supremacist speaker at the University of Florida in Gainesville. The Gainesville police identified the men arrested as: (1) Tyler Tenbrick, 28, of Richmond, Texas, (2) Colton Fears, 28, of Pasadena, Texas. (3) William Fears, 30, of Pasadena, Texas. Tyler Tenbrick reported fired the handgun, and the two Fears brothers reportedly urged him to shoot at a crowd of protester. The Anti-Defamation League (ADL) stated that it had been previously monitoring the activities of the three men arrested as white supremacists, including documenting their activities with extremist groups Vanguard America, Patriot Front, neo-Nazi Aryan Renaissance Society, and support for Richard B. Spencer’s “Alternative Right” blog (aka “Alt-Right” blog).