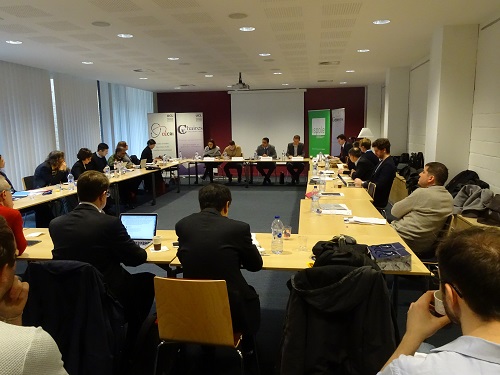 A two-day Conference titled “The Chinese Way, The New Normal?” was held at the Université Catholique de Louvain (The University of Louvain-UCL), a leading European University in research and innovation in political sciences. The symposium was organised by the UCL’s Center for the Study of Crises and International Conflicts, the Genesys Network and the University Chair Baillet Latour. The Conference brought together researchers, academicians and practitioners in the field of Asian studies, who deliberated upon China’s geopolitical and socio-economic rise in world and regional politics, its New Silk Road Initiative and the issues and challenges related to its expansionist strategic actions.

Mr. Junaid Qureshi, Director of the European Foundation for South Asian Studies (EFSAS) was invited as a key-note speaker during a panel discussion on the ‘Belt and Road Initiative in Context’. He examined the legal implications of the building of the China Pakistan Economic Corridor (CPEC) with regard to the disputed territory of Jammu & Kashmir and, thus in turn, Gilgit Baltistan, through which the CPEC passes.

Mr. Qureshi gave a historical analysis of the genesis of the erstwhile Princely State of Jammu & Kashmir, emphasizing the fact that the region of Gilgit Baltistan is an integral part of the disputed territory of Jammu & Kashmir and to which neither Pakistan nor China have any legal right or claim over. While administratively controlled by Pakistan since the First Kashmir War, Gilgit Baltistan has never been formally and legally integrated into the Pakistani State and does not participate in Pakistan's constitutional political affairs as subsequent Pakistani administrations have argued that the Pakistani State cannot officially integrate Gilgit Baltistan into Pakistan in line with its claimed, yet not practised, position that a referendum should be carried out across the whole of the region and any such step would prejudice its international obligations with regard to the Jammu & Kashmir conflict.

Mr. Qureshi argued that notwithstanding legal and international constraints, it has become imperative from China’s perspective that Gilgit Baltistan has a political status within Pakistan in order to legitimise and consolidate its stakes in the CPEC, while internationally Beijing continues to maintain that the Kashmir-issue is a legacy issue between Pakistan and India and should be properly handled by the two countries through dialogue and consultation. As Mr. Qureshi explained, in total disregard for international norms and practices, Beijing has signed the CPEC with one of the parties to the dispute involving territory that forms part of the dispute. In any case, if a project facilitates a third country’s entry into territory long disputed between two other countries, it cannot remain just be advertised as an economic and social development venture and must necessarily take into consideration the political aspects involved as such entry is bound to further complicate the dispute and impede its resolution.

Mr. Qureshi warned that any kind of solution to the long standing Issue of Jammu & Kashmir will only be jeopardized by these kind of intrusions as China is not investing billions of dollars to simply withdraw if any solution is found to the Jammu & Kashmir Issue; it is there to stay and will claim ownership by virtue of its heavy investment.

Director of EFSAS concluded his presentation by pointing out that China and Pakistan’s relationship has an embedded enduring imbalance as Pakistan is in China’s debt and the debt will only deepen. He also stressed that the investments on behalf of China towards Pakistan are of such colossal magnitude and respectively the obligations of Pakistan towards China are so unbearably high, that Pakistan will soon find itself in a situation, just like Sri Lanka, where the only possible solution for overcoming this issue is through its transfer of power, independence and sovereignty to Beijing. Mr. Qureshi added that the people of Gilgit Baltistan and the rest of Jammu & Kashmir would, in return, ask: Why their land should function as collateral and its future be mortgaged to defray Pakistan’s illegal and reckless adventurism?

A variety of speakers participated in the event, among which were representatives of the Royal Institute for International Relations in Brussels, the French Institute of Geopolitics, the Department of International Security at the US Air Force Air War College, the East Asia Security Centre of the Bond University, Australia and many others. The Conference was attended by researchers, scholars, practitioners, policy advisors and students from all over the world.

The event was followed by a vibrant Q&A session during which the audience and speakers engaged in a discussion pertaining to China’s rise in international relations and its strategic geopolitical expansionist designs.