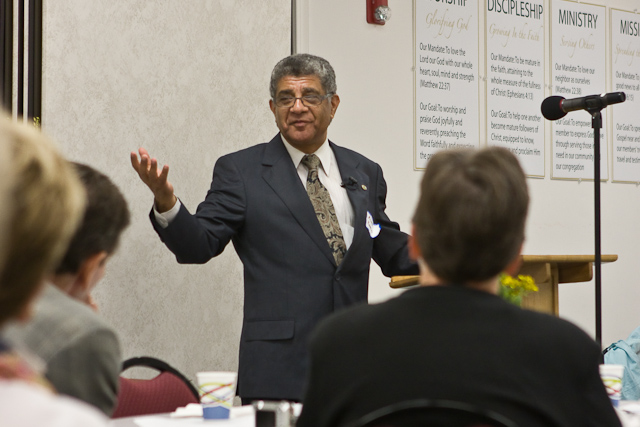 During Egypt’s Birth of the Prophet national holiday this past November, as per tradition the Egyptian president, Abdul Fatah Al Sisi, and the grand imam of Al Azhar Institute, Mohammed Al Tayib, accepted the invitation by the Egyptian Endowments Ministry to attend an annual religious event at the Al Azhar Institute.

President Al Sisi opened the event with his address to the gatherers. Directed at Al Tayib, he urged a renewal of discourse within Islam’s highest office. He zeroed in on the topic of Islam’s primitive husband “oral divorce” device. This was not the first time Al Sisi brought up the sensitive issue of reform. He had made an appeal one year earlier, only this time he went a step further.

Taking his cue from recent expressions by Egyptian thinkers and independent Islamic scholars who exposed the violence in the Quran and blamed the earliest interpretations found in Sunni books, Al Sisi suggested modification of the interpretations of the Sunah’s doctrinal verses regarding divorce. Ironically, it was Al Sisi’s government early last year that arrested, imprisoned, fined and censored the very Egyptian critics whose materials he used to defend his position before Al Ahzar.

Unlike the past when the grand imam moved his head in a sign of agreement, this time Al Tayib denied the president with decisive determination, saying, “The current situation cannot be changed, otherwise this means shifting away from Islamic religion.”

The scene is clear. A conflict exists between the head of the state and the head of the deep state. The latter is protected by the relatively recent modification of the seventh article of the Egyptian constitution that places him above the law and prohibits his removal.

For the majority of Egyptian Islamic leaders, Al Sisi is stirring up trouble in order to resolve it by his final solution -- a deep state coup stripping away all power from Al Tayib and Al Ahzar religious institute just as President Morsi (favored by the deep state) was taken down when Al Sisi seized the moment and took control.

Officially however, Al Sisi is calling for Islam to reconcile with the times, be consistent with human rights issues and re-interpret its aims without political goals. If Al Sisi succeeds with a new “true” Islam, which this certainly would be, the numbers of Islamic terror attacks seen internationally today and the level of persecution and discrimination against non-Muslims in Islamic countries today will come to an end. This end would of course justify the apparent absurdity of an elected statesman, albeit the president, trying to influence change in the fourteen centuries old interpretation of Allah’s verses.

Hostility between the president and the grand imam has existed beneath the surface since the removal of the Muslim Brotherhood president, Mohammed Morsi, in 2013.

As soon as Morsi was overthrown, Al Sisi sought an endorsement from the religious heads. The Coptic pope, Tawadros II, gave his support immediately. The offended grand imam hesitated. After all, Morsi was

considered by Al Tayib to be “the head of the believers.” Moreover, Al Sisi never informed the imam of his intent to overthrow Morsi.

The military applied pressure to the grand imam as the official representative of Islam and eventually convinced him to stand with them. Al Tayib agreed reluctantly.

Underneath the apparent stability between the head of state and head of Al Ahzar runs a deep fissure. Al Tayib buried his animosity and Al Sisi remained cautious of possible retaliation.

When the Muslim Brotherhood protested against Al Sisi’s coup in support of Morsi, it began two sit-ins simultaneously in two squares: Rabi'a Al Adawia in Cairo and Al Nahada in Giza. Responding on the morning of August 14, 2013, the police and army forces moved in to break up the protests. As per the Egyptian Health Ministry report, 670 died and 4,400 were injured from both sides as a result of the break-up.

During the four-days long police crackdown, Islamists attacked and destroyed the majority of the eighty-seven Coptic churches currently in ruins and destroyed various Coptic houses, businesses and agriculture as a reaction to the Coptic Pope’s support of  Al Sisi’s “military” coup ( considered to be a necessary force used on behalf of the people.)

Unknown to the military beforehand, Al Tayib appeared on TV during the quelling of the protests stating that he had nothing to do with the military crackdown, nor was he informed of it. His position was “recorded for history.” He absolved himself of shedding innocent Muslim blood and urged a peaceful solution to the crisis. He added that Al Azhar regretted the occurrence of victims and prayed for mercy on them. Finally, Al Ahzar Institute was never to involve itself in such political conflict.

In summary, Al Tayib distanced himself from Al Sisi, setting himself up as his rival -- remaining neutral overall and sympathizing with Muslim Brotherhood losses. By this, Al Tayib captured Al Sisi’s potential support and hurt Al Sisi in the early moments (just 45 days) of his takeover. There were many Brotherhood sympathizers on the fence regarding Al Sisi’s leadership just waiting to shift support toward him or away from him.

The constitution’s second and seventh articles render Al Azhar the upper hand. The second article was introduced by Sadat in 1971 which stated that “Islam is the religion of the state, Arabic is its official language, and the principles of Islamic law (Sharia) are the main source of legislation.” No presidents after Sadat, including Al Sisi, have disagreed with this.

“Al Azhar is an independent Islamic scientific body that is exclusively concerned with all its affairs. It is the main authority in the religious sciences and Islamic affairs. It is responsible for the advocacy and dissemination of the religion sciences and the Arabic language in Egypt and the world. The State is committed to providing adequate and needed financial resources to achieve its objectives.”

The new update fortified Al Ahzar and the grand imam with the following statement, “The Al Azhar imam is independent and cannot be removed; the law regulates the method of his selection which can only be between Al Azhar senior scholar members…”

Almost exactly two years ago, on Egypt’s January 25 Police Day celebration, the president took the opportunity to publicly ask the grand imam to generate a religious law to reform and regulate the “oral divorce” pronouncement.

With the eloquence of a longwinded statement, the Al-Ahzar Supreme Council of Scholars slammed the president with a hard reminder of its strength and power over believers. Delivering a negative decision to the president’s request the response reinforced Al Ahzar’s “status in the Egyptian nation’s conscience, which was affirmed by the Constitution…”

The Al Sisi regime has used the state controlled media to spread hints of the government drafting new laws to regulate and reduce the influence of Al Ahzar Institute. Al Tayib was being tested. As such, Al Azhar never reacted to this information. Ignoring it was likely due to Al Azhar’s constitutional security and its far-reaching tentacles in government key points informing the institute of the idea’s implausibility.

As well, the grand imam’s categorical rejections of the president’s religious renewal statements are evidence that the imam sees the requested compromise to be nothing less than a power grab by the president. No way would he consent to that. Al Tayib’s counter attacks deliberately mischaracterized the president’s suggestions as an attack on the whole of Islam and served to embarrass Al Sisi. Al Sisi in turn resorted to silly tactics in his speeches to brush it off in public.

In general, A Tayib’s religious answers are geared to popularity and convenience

There is no Sunni Muslim man anywhere across the world that would not overwhelmingly support the grand imam for the current religious definition of divorce proceedings. However, this divorce method is not spelled out as such anywhere in the verses of the Quran. Al Tayib has no doctrinal mandate per se to stick with it and could justifiably cooperate with Al Sisi’s request.

Could Al Sisi expunge the seventh article of the constitution?

Prior to the president’s second term election, rumors were flying that members of parliament wished to alter the term limit article of the constitution to allow Al Sisi a third term or possibly a life term. However, all past presidents have simply ignored the constitution and remained in office between 11 and 31 years. Therefore, it seems unlikely that Al Sisi would concern himself with this particular issue.

However, if the term limit issue were used to open up the larger issue of modifying Egypt’s constitution, especially reversing an element (the seventh article) added during the brief period of the previous ousted president, the parliament, where Al Sisi has enormous support, could put it to a vote.

Would Al Sisi be willing to go so far as to orchestrate this move, which would make Al Tayib susceptible to removal? If so, once the parliament began discussions, the majority of Muslim Egyptians, including factions of the state police and the military, would rush to defend Al Ahzar’s position and Al Tayib.

Without a doubt, such a move would become a trigger to destabilize the country. Civil strife would ensue. Much would come potentially from the backlash created by Al Tayib evoking democracy (ironically) to protect his position.

NOTE: Recently, the Egyptian regime has outlawed the sale of yellow vests in Egypt.