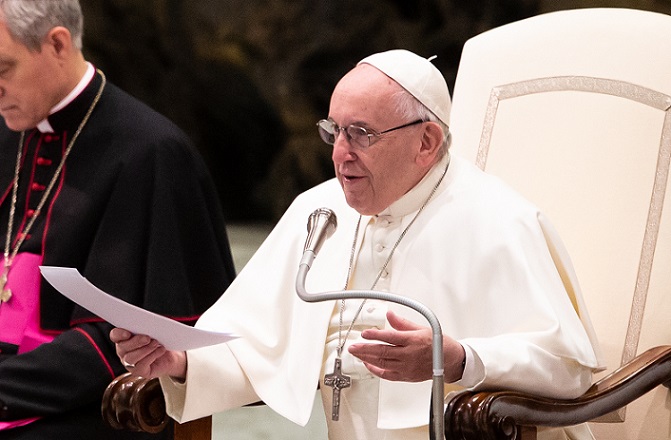 The Vatican says the decision has been taken because ‘conditions and circumstances change,’ but that dialogue towards regularization of the SSPX ‘continues.’

As had been widely expected, Pope Francis has issued a papal decree suppressing the pontifical commission charged with bringing separated traditional Catholics linked to the Society of St. Pius X back into full communion.

In a motu proprio signed Jan. 17 and published today, the Pope decreed that the Pontifical Commission ‘Ecclesia Dei’ is to be abolished but that its work will continue in a “special section” of the Congregation for the Doctrine of the Faith.

Francis said he decided to issue the decree after “ample reflection,” and having considered what he called the “changed conditions” today compared to those that led Pope St. John Paul II creating the body in 1988.

The Pope praised the achievements of the pontifical commission in helping those connected with the SSPX to “remain united with the Successor Peter while preserving their own spiritual and liturgical traditions.”

He also noted significant developments since the commission was founded: Benedict XVI’s 2007 motu proprio Summorum Pontificum which fully liberalized celebration of Mass in the Extraordinary Form, and Benedict’s reorganization of the commission following his lifting of the excommunications of four SSPX bishops in 2009.

Pope Francis said he came to his decision after officials requested in November 2017 that the CDF directly handle dialogue between the Holy See and the SSPX.

He consented to their request in January 2018, recognizing that the “questions being dealt with” are “of a doctrinal nature.”

The Holy Father also noted that institutes and religious communities which are used to celebrating the Extraordinary Form “have today found their own stability of number and of life.”

The Pope also said he took the decision because he wants the aims of the pontifical commission to be “made ever more evident to the conscience of the ecclesial communities.”

As a result, the Pope ruled that “Pontifical Commission Ecclesia Dei, instituted on July 2, 1988 with the Motu Proprio Ecclesia Dei adflicta, is suppressed.”

He said the tasks of the commission are now “entirely assigned to the Congregation for the Doctrine of the Faith, within which a special section will be set up to continue the work of vigilance, promotion and protection conducted so far by the suppressed Pontifical Commission Ecclesia Dei.”

He also said the commission’s budget will now be “part of the ordinary accounting of the above-mentioned Congregation.”

The motu proprio is to come into force “immediately.”

As part of a separate motu proprio published today on the future of the Sistine Chapel Choir, the Pope appointed the outgoing Secretary of Ecclesia Dei, Archbishop Guido Pozzo, as the choir’s superintendent to the economy.

In an explanatory article in today’s L’Osservatore Romano, and which Francis refers to in the motu proprio, Nicola Gori writes that “conditions and circumstances change, but the dialogue continues” with the SSPX and with all those who have followed its founder, Archbishop Marcel Lefebvre.

He explained that the “main core of this dialogue is now made up of mainly doctrinal issues” which has “led” Pope Francis to take the decision announced today. He stressed it is not a question of “total abolition” of the commission but rather “a transfer of competences given that the main axis on which the task will be set is restricted to the doctrinal sphere.”

“This means that progress has been made in communion and therefore the current motu proprio offers an implicit recognition of the pontifical commission which, with its efforts and its activity, has brought its own duties to a conclusion.”

An informed Vatican source told the Register that the motu proprio is “essentially” a good development towards helping the SSPX return to full communion.

But he added that primarily it “represents a normalization of the ecclesiastical status of traditionalist communities in the Pius X ambit which many years ago were reconciled with the See of Peter, as well as those celebrating the extraordinary form.” Both areas, he noted, have been “administered by Ecclesia Dei until now.”

He also pointed out that “dialogue with the SSPX has actually been the responsibility of the CDF for some time.”

Gori notes in his article that with the 2009 motu proprio Ecclesiae unitatem, Benedict had “organically linked” the commission with the CDF.

Archbishop Marcel Lefebvre founded the SSPX in 1970 in response to errors he believed had entered into the Church following the Second Vatican Council.

The commission’s role was originally to care for Archbishop Lefebvre’s followers who wished to remain united with the successor of Peter, also serving as the chief Vatican body in overseeing efforts to regularize the SSPX and bringing them back into full communion with Rome.

The commission also had the task of regularizing canonical situations of religious communities of a traditionalist nature, giving them a canonical form corresponding to their charism.

Added to this, the commission had the responsibility of working with local bishops to facilitate Mass in the Extraordinary Form of the Roman Rite (according to the 1962 Missal) for those faithful who request it, especially after Pope Benedict XVI’s 2007 motu proprio Summorum Pontificum.