Pope Francis' "ark of fraternity" floats all faiths ... until it sinks. By Dr. Ashraf Ramelah 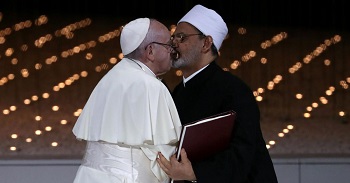 The three-day Conference on Human Fraternity was an event recently held on February 3 in Abu Dhabi, United Arab Emirates, where seven hundred religious leaders from around world gathered to hear the speeches of Pope Francis and Grand Imam Al Tayeb. Two of the world’s three leaders of the Abrahamic faiths gave speeches and signed the newly created Document on Human Fraternity for World Peace and Living Together.

Historically, there has been no relationship between the Vatican, head of the Catholic Christians, and Al-Ahzar Institute, head of Sunni Muslims. However, prior to this month’s historic declaration two visits were made between them within months of each other in 2018 -- one at the Vatican in Rome and one at the Institute in Cairo – for undeclared reasons. Their meetings paved the way to this conference.

Emphasizing the importance of the role of religions in the construction of world peace, the Document on Human Fraternity states that it upholds the protection of places of worship – synagogues, mosques and churches. Although the latter two were represented on the platform there was no Jewish representative present to speak or sign the document. Due to the apparent significance of this conference and document, absence of the Jewish faith from the stage is an enigma.

The “Apostolic Journey” of Pope Francis

No pope has ever before walked on the soil of a country located in the Arabian Peninsula in spite of the fact that the first Catholic Church was established in the United Arab Emirates in 1965. The UAE is an Islamic country unique in the matter of freedom of religion. It respects and enforces religious tolerance. There are 76 temples and churches where followers practice freely without any interference. The UAE demonstrates to the world that civil law can usurp religious law in an Islamic country if it is the will of the state.

In general, the UAE abides by the U.N. Universal Declaration of Human Rights with Article 32 of the country’s constitution providing “the liberty to perform religious services in accordance with established local customs.” Pope Francis intended his visit to this Islamic nation to be “a cornerstone for a new chapter in the history of relations between the two religions.” The goal of his visit would be to close the gap between Catholics and Muslims – meaning all of Christianity.

In his speech, the pope invited Muslims and Christians to enter the virtual Ark of Brotherhood to be protected from the mighty waves of today’s violence. Emphasizing the need for peace, the pope stressed the need for unity with Muslims. However, in the subsequent speech made by the grand imam it was not at all evident that the head of the largest sect of Muslims around the world is interested in reforms to the doctrine connected to the lethal violence issuing from Islam on the world stage in order to bring about peace.

To this we must ask how the pope plans to protect the sheep from the wolves inside the fraternity ark. It is certainly foolish to invite into an alliance for peace those whose roots of violence remain unexamined and unrebuked.

The Document on Human Fraternity for which the pope used the metaphor of the Ark of Brotherhood casts a wide net for one humanity of believers to unite and work together to advance a culture of mutual respect “in the awareness of the great divine grace that makes all human beings brothers and sisters.”

However, Christians consider only those within the body of Christ to be brothers and sisters, and, therefore, this represents heresy.

Pope Francis ignores the validity of certain Koranic verses that justify hatred and violence. In his speech, he warns that “there is no religious justification for any kind of violence: hate, blind extremism, killing, oppression or acts of terrorism,” and yet we know there is for Muslims.

The pope cautions against profaning God by using His name to commit acts of hate against another human or kill another brother, and we know that such glorifies the god of Islam. Unfortunately, the pope does not seem to mind if his message is received and considered before seeking the imam’s signature to bind with him in brotherhood.

For Christians, the idea behind this lofty Document on Human Fraternity is quite a stretch because any Christian serving the God of the Most High knows well that Muslims serve another god and that brotherhood is not possible in a spiritual or moral sense. The Ark of Brotherhood, therefore, is an absurd illusion.

In order to achieve it, the pope pitches the banner of Humanism to his audience of religious leaders, the umbrella under which we all reside according to him (“God is the origin of the human family” and “sons of the same humanity”) to sell his grand scheme of “harmonious co-existence.”

For his part, the Grand Imam Al-Tayeb fashioned his words to agree with the importance of the fraternity document as an important call for a culture of peace and respect. At the same time, the tone of his voice and chosen language echoed an Islamic Calipha addressing his warriors – arrogant and supreme.

As head of Sunni Muslim clerics and believers around the world, the grand imam saw fit to implicate forces outside his control and lay blame on lack of world intervention for violence and war, presumably alluding to Islamic forces in Syria and Iraq conflicts. He noted the expansion of Arab-Muslim terrorism in the West for the past four decades. In this opportune moment, the imam could have taken responsibility -- using his powerful position -- to promise to curtail future terrorism by treating its source through reforming interpretations of Koranic verses.

He directed blame at Western media for labeling Islamic terrorism “Muslim terror” and not “criminal,” denying a truth he could be admitting and addressing; instead, he chose a cover-up.

Fighting for Islam’s superiority from the fraternity podium, Al-Tayeb highlighted the necessity of Islamic religious roles in the political and civil daily life of people in the West in order to improve morality and bad behavior and urged Muslims living in the West to legally counter any local laws contradicting Islamic Sharia. This outrageous declaration alone should have halted the signing of the fraternity document.

With this, the entire pageantry must be called into question by those of us watching. Are we seeing a struggle between the two religious leaders where the grand imam is expected to submit to the pope, or rather a staging by the two leaders to bring about a mutually agreed upon end? Either way the worldwide interfaith movement -- intending to join all religions together as one under the universal banner of Humanism -- is bolstered by it.

This Ark of Brotherhood will not be a boat most of us will want to jump in no matter how turbulent the seas. Christian doctrine forbids Christians to yoke together with enemies of Christianity. The Document on Human Fraternity and the interfaith initiative it serves requires the risk of being in one boat with those intolerant of other faiths and opposed to Western freedoms. A greater enemy thereby emerges requiring nothing short of our political and spiritual demise.