Healing is different from cure, conveys Pirates Of Chemotherapy. By Bobby Ramakant 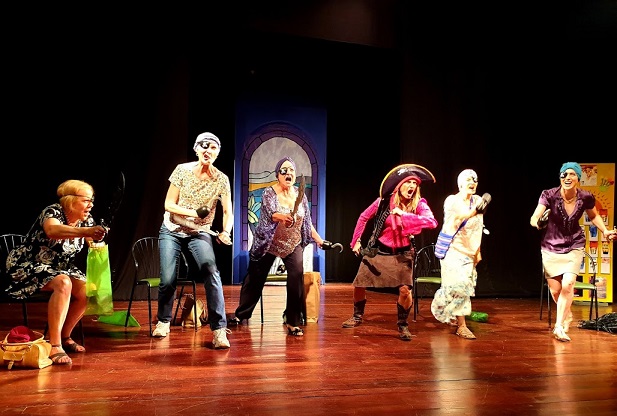 When we first heard of a dramatic comedy theatre play on breast cancer, it was difficult to comprehend how will the three go together? Comedy, theatre and poignant theme of breast cancer! Glad we went for the preview show of this play because it did justice to comedy, theatre and breast cancer issue in a very compelling way. One of the most throbbing messages that resonates within me, is: healing is different from cure. It is important to mention that this play was staged by outstanding artists, few of them are breast cancer survivors (including one male actor) themselves.

Toni Cacioppo, director of this powerful dramatic comedy, Pirates of Chemotherapy (written by Paul Schutte), explained in an exclusive interview with Steve Mellow: "Not only ‘Pirates Of Chemotherapy’ is funny and well written with rich and well-developed characters, but it also has a message that needs to go out. And that message is importance of early detection of breast cancer - sooner your breast cancer is caught higher your rates of survival.”

'I hated when people preach to me'

“One of the characters in the play says, ‘I hated when people preach to me’. So, this play gets the message out in an entertaining way and you do not feel that you are being preached” points out Toni Cacioppo, underpinning why it is vital to ensure entertainment and education go hand-in-hand.

This play, Pirates Of Chemotherapy, was staged in Chiang Mai, Thailand (14-17 February 2019) and live streamed online on 15th February 2019 (www.bit.ly/piratesofchemotherapy). This 'dramedy' is about six women (and one man) who share a diagnosis of #breastcancer, all of whom are in various stages of treatment, recovery, and remission. They bond and band together in touching and often hilarious support of one another, pledging to live life to the fullest!

When life takes a permanent detour

The play begins how a positive diagnosis of breast cancer and disclosure, impacts people and life takes a permanent detour thereon. The counselling systems (if) in place, are rightly providing information, but are affected people able to grasp and absorb all the information bombarded to them? Are our health systems giving space enough for people to better cope with the therapy? Life-changing impact of cancer diagnosis is coupled with deep rooted concerns of losing body parts, such as breast, and intertwined with a matrix of human interpersonal issues.

Dr Rita Banik, who has not only courageously fought breast cancer but also bravely survived other cancer recurrences, joined the live streaming of Pirates Of Chemotherapy. "Even cancer diagnosis creates a big havoc in our mind. Cancer related fatigue starts from our mind, then the fatigue grows through the long treatment, surgery, chemotherapy etc, and drains all our energy. Besides the looming danger of cancer spreading in the body which happened to me. I was a normal person having a good life, and with one stroke of cancer diagnosis, everything changed – it changes the life dramatically." said Dr Banik who now leads 'Race To Rein In Cancer'.

For me, it is important to share how this comedy play successfully breaks the silence that surrounds intimacy and sexuality related concerns of breast cancer patients.

Thankfully this play has one male breast cancer survivor along with six female survivors. Women face the majority of the burden of breast cancer as well as are at higher risk, but men and transgender people have breasts too and do get affected by cancer of the breast, although the rates are much lower compared with women.

Jokes apart, mammogram procedures are painful. This truth is so rightly brought out in the play too. We need better diagnostics that is convenient, patient-friendly, affordable and accessible to all those in need. If we truly want people to get mammography done regularly when indicated, then we have to ensure it is patient-friendly and not painful. People's needs should set the research agenda.

"It is hard to laugh with well ones. They do not know how it feels" is a line from the play that still echoes in my heart. Perhaps that is why affected communities connect so intensely with each other and help one another as they move ahead in their journey to heal and cure. May be people who undergo similar experiences find it easier to be vulnerable enough to share with each other with empathy and dignity.

Travails of women with breast cancer multiply if their relationship with their partner goes through a rocky phase. “My husband left me”, “I was withering away, he won’t even touch me”, “ I wonder what he truly feels about me”, “I have a chest of a boy”, “I cannot stand to look at you”, “He married a whole woman”, “this is about intimacy, about being a woman”, “Do you still find me attractive? My breasts were first thing that attracted him to me – he wants to hold me tight, but he is afraid he may hurt me” were some of the dialogues spoken by characters in the play that still are etched in my mind. “We are more than couple of breasts” rightly said the survivors in unison!

A character in the play goes through divorce where her husband has cleaned all bank accounts leaving her on the edge of bankruptcy. This character rightly remarks “He said I looked like a pirate but he was a pirate all the while”.

“Why anyone else will love you when you don’t love yourself” is another life influencing dialogue during a conversation between survivors in support group.

Towards the end of this play, a character dies as her breast cancer could not be detected early enough and had spread too. Before she passed away in the play, how "healing" happened in the support group despite she had incurable cancer, is so powerfully yet subtly brought out. Resurrection was the name of the store she ran, and is also the name of the sequel of this play which is currently being developed, shared Toni Cacioppo.

“Educate in a way they don’t get to know they are being educated” is another value this play embodies!

Pirates Of Chemotherapy was live streamed!

Dr Pooja Ramakant, Associate Editor of prestigious Indian Journal of Surgery, who joined the live streaming of Pirates Of Chemotherapy play (www.bit.ly/piratesofchemotherapy) said: “I agree with Toni Cacioppo, as preaching does not help much but we have to effectively communicate in local contexts to encourage health seeking behaviour. Breast cancer is the most common cancer among women, and in developing countries it is also among the deadliest cancers. Women present late to us unfortunately as 50-70% of patients who present to us are already in advanced stage or metastatic when they are first diagnosed. If breast cancer is picked up early, then survival is much better. All women and men must self-examine their breasts every month - neither it costs anything, nor any equipment is needed. If in any doubt people must seek medical checkup without any delay.”

Dr Pooja Ramakant, who is former member of Editorial Board of Indian Association of Endocrine Surgeons (IAES) added that patient support groups play a key role in helping people with breast cancer. Those who have gone through the journey of seeking treatment for breast cancer are best placed to help support each other. Quality cancer care includes dignity, respect, support and love and considers not just the physical impact of cancer but respects the emotional, and social wellbeing of each individual and their carer.

Dr Chanchal Rana, breast pathologist from King George’s Medical University (KGMU), also joined the live streaming of Pirates Of Chemotherapy. She said "Breast cancer can be diagnosed at an early stage and is a treatable malignancy. In developing countries like ours many times patients are coming at a very late stage where they have to go through more extensive surgery, chemotherapy and other treatment modalities. Good sign is that more women are self-examining their breasts. We must remember that cancer of the breast is treatable if diagnosed at an early stage."

One of the after thoughts of seeing this play three times, was, how people who come across often as “indestructible”, may be tanking up issues that may make them vulnerable as human beings. Being invulnerable and indestructible also perhaps prevent them from accepting love and empathy.

When the live streaming of Pirates Of Chemotherapy play ended, Shobha Shukla, noted gender justice advocate and Executive Director of CNS (Citizen News Service) commented: "What I learnt today is that while cancer is nothing to laugh about, but one can choose to laugh at it. Just like pirates of the sea, you really did spit in the wind against all odds and made it change its direction. And like pirates, despite the missing parts, you fought a formidable battle, and reminded us of how the relentless human spirit responds to love and also that healing is different than cure. The play was like an infomercial for early cancer detection and convinced me that along with chemotherapy, the curative powers of laughter and fortitude should not be discounted."

(Bobby Ramakant is a WHO Director General’s WNTD Awardee and Policy Director at CNS (Citizen News Service). Follow him on Twitter @bobbyramakant or welcome to visit www.citizen-news.org)