EFSAS discusses nexus between terrorism in South Asia and the West 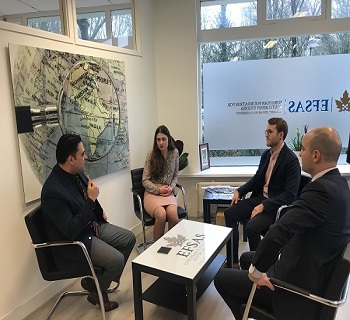 A delegation of EFSAS, consisting of Mr. Dušan Vejinović (Senior Research Analyst EFSAS) and Ms. Yoana Barakova (Research Analyst EFSAS), held a meeting in the Hague with Mr. Jean Pascal Zanders, an independent researcher/consultant on disarmament, non-proliferation of chemical, biological, radiological and nuclear weapons and other security questions, who heads The Trench, a research initiative dedicated to the future of disarmament. Mr. Zanders is also a Senior Research Associate with the Fondation pour la recherche stratégique in Paris, and former Senior Research Fellow at the European Union Institute for Security Studies, as well as Director of the Geneva-based BioWeapons Prevention Project and Project Leader of the Chemical and Biological Warfare Project at the Stockholm International Peace Research Institute.

The delegation of EFSAS and Mr. Zanders profoundly discussed the circumstances, which could lead to an escalation of armed conflict in the highly volatile region of South Asia, particularly having a focus on India and Pakistan. According to him, in an almost perpetuated cycle, both countries expect incidents to happen, which inevitably bring out casualties, ritualizing the situation to the extend that despite the growing tension, none of the two parties plan on directly confronting the other or at least not through resorting to the usage of nuclear or chemical weapons. Mr. Zanders called this process, the instrumentalization of the enemy, which witnesses the increase in hostile rhetoric and antagonistic sentiments towards the adversary. Mr. Zanders further claimed that as per his opinion, insurgents infiltrating and misappropriating nuclear technology from the Pakistani government establishment is an unlikely scenario, since despite any potential support that Pakistan could have for such radical elements, its political authority would not fully entrust any extremist outfits with such dangerous non-conventional weaponry. In response, EFSAS highlighted the mainstreaming of terrorist leaders in the Pakistani leadership, arguing that any such misappropriation could stem from the formal endorsement of radical elements on behalf of the Pakistani State. The implications of the recent withdrawal by the United States and Russia from the Intermediate-Range Nuclear Forces Treaty, in regards to the region of South Asia, were additionally deliberated upon.

Both the representatives of EFSAS and Mr. Zanders agreed that India and Pakistan must urgently adopt essential safeguarding mechanisms, which could prevent the further escalation and possibility for direct confrontation in respect to both conventional and non-conventional weapons. Opportunities for future collaboration and exchange of relevant expertise and opinions were additionally discussed.

Mr. Dušan Vejinović and Ms. Yoana Barakova also met Dr. Tahir Abbas, Assistant Professor at the Institute of Security and Global Affairs at Leiden University and a Visiting Senior Fellow at the Department of Government at the London School of Economics and Political Science, whose current research focuses on ethnicity, migration, social conflict, social cohesion, political violence, radicalisation and terrorism. Following his extensive work on the radicalization of British South Asian Muslims, EFSAS and Dr. Abbas underlined the nexus between terrorism in South Asia and the West. Dr. Abbas analysed the processes of  youth radicalization, pinpointing factors such as islamophobia, victimisation, marginalisation, lack of adequate education, absence of opportunities for stable employment and social integration, as the major reasons behind its genesis. Dr. Abbas further examined the manipulation of social media platforms by terrorist organisations in their recruitment of vulnerable young Muslims. Both EFSAS and Dr. Abbas suggested that alongside investing time and efforts in security and defence, western countries should realise the importance of secular education and sustainable employment in the fight against terrorism, in addition to the current generation of counter-narratives, which challenge extremist rhetoric.

EFSAS and Dr. Abbas additionally explored possibilities for future cooperation in regards to the implementation of joint research projects and field work.