Why the only Christian and Hindu religious minorities’ Girls are victims of abduction and rape in Pakistan? By Mushtaq Gill Advocate 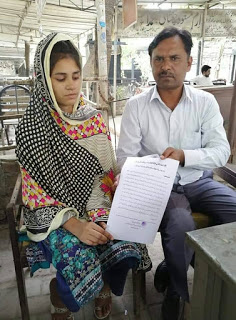 Today I, Sardar Mushtaq Gill HRD Lawyer, head of LEAD, came across a gang rape case of a Christian girl 15 years old namely Maria on social media after being highlighted by one local activist Mubarak Masih. I was made compelled to pen the issue of Christian girls the victims of abduction, rape, forced conversion and forced marriages in Pakistan

According to the contents of FIR No.709/2019 registered at Police Station Feroz Wala District Shiekhupura on dated 15 June 2019 under offence section 376 Pakistan Penal Code against a Muslim man Muhammad Sajid along with his four unknown accomplices on the complaint of victim’s father namely Jalal Masih after passing six days of the occurrence. The complainant says that her daughter was alone at home and said accused came and kidnaped her daughter on gunpoint and he also mentioned that two eye witnesses saw her while she was being kidnaped who told him that his daughter was kidnapped by the said accused. He and his wife went to search at the shop of the said known accused who is running a shop for installments and he was not at his office. They contacted the accused and he was ready to give back victim to his parents. Next day the said accused dropped his daughter at his home and then she disclosed the whole occurrence of gang rape with the victim.

Recently according to the reports say in Pakistan, it has busted a major prostitution ring smuggling Christian girls to China for fake marriages. The Chinese Embassy in Islamabad has issued a statement urging caution against unlawful matchmaking centers involved in these marriages to earn profit. The illegal matchmaking centers lure poor Pakistani girls, especially Christian girls to marry Chinese men who are either visiting or working in Pakistan. They present fake documents of Chinese men showing them either as Christians or Muslims. They then find poor girls mainly from the Christian community to marry them by offering money and promises of ‘good life’. However, many girls reportedly became victims of human trafficking and forced into prostitution.

I think this is human smuggling and greed is really responsible for these marriages because these girls are belonging to mostly very poor families. These Pakistani brides are trapped into human trafficking and prostitution in China on pretext of marriage. In the same way Christians and Hindu girls are being trapped by local Muslims men and they use their influence to abduct them, to rape them, to convert them in Islam and later to get them married with their kidnapers to save their skin from criminal charges. In the most of the cases victims are trapped into prostitution.

I have compiled a list of about 28 cases of Christian girls’ victim of abduction, torture, sexual harassment, rape, forced conversion and forced marriages consisting of the period from November 2018 to June 2019.

1-     Shalet Javed (15 years old) ,was abducted, forced to convert to Islam and forced to be married from Dhandra, Faisalabad

4-     On the evening of 21st November 2018, during celebrations of the birth of Muhammad (Rabi ul Awal) Sonia (10 years old) was playing with her sister Laiba (9 years old) in the grounds nearby their home at Chak 62 Bhagywala Matiyani district Faisalabad, a Muslim abductor tried to kidnap and rape them and saved by the reaction of the younger child ,however the abductor fled the scene of the crime.

5-      A Pakistani Christian mother of eight, Shazia Bibi, was beaten and forced to convert to Islam. Shazia Bibi used to work as a domestic servant at Mian Imran’s house, in Chanan Village District Gujrat.

6-     Faisalabad, a Christian girl Saima, her mother Kausar and their relative Salma were illegally detained for thirteen days in Jhumra police station, and tortured by male policemen. Saima had been working as a domestic worker at the house of mill owner and politically influential Rana Saif for three and half years.

7-     In the month of June 2019, a Christian girl Rachel Irfan was harassed to have sexual relationship with two Muslim lecturers Doctor Shafqat and Shaista Ghazanfar in University of Education Lahore.

8-     On 13-06-2019, a Christian girl Benish was kidnapped when coming back home from taking exam of F.A resident of a small Christian Colony near Gloria Colony Shiekhupura.

9-     A Christian girl from a village of Shahdara Lahore namely 15 years old Ribqa was abducted by Muslims.

10-  On 9-06-2019, a Christian girl Neha Khawar was abducted from area of Ara Bazar of Lahore and at Police station South Showni FIR registered after involvement of Christian political person MPA Haroon Imran Gill.

14-   Rana Town, Shere Bengal Colony, a Christian girl 12 years old Seneha Ashraf when going to school, was abducted and made hostage in a nearby school and attempted to be raped by a Cleric Murtaza and Muhammad Mubashar.

15-  Shahdara Lahore, a Christian girl 14 years old namely Raisha, was kidnapped, raped, forced to convert into Islam and then married.

16-  Two real sisters Rimsha Javed and Neha Javed were kidnapped and raped and converted to Islam by a Muslim Khalid Shah at Shera Kot Lahore.

17-  Qila Dedar Singh, a 15 years old Christian girl namely Sheeeza, was kidnapped and forcibly converted to Islam and married by Muslims kidnapers who have support of landlords Muslim of the area.

18-  Faisalabad Chand Colony a 15 years old Christian girl was abducted and forcibly converted to Islam and married to a Muslim man Rafael.

19-  Sania Lateef, 15  years old Christian girl , went missing on 25 May. Some witnesses saw her being abducted by two Muslims, Muhammad Naveed and Muhammad Pervaiz. She lives in Kokian Wala, Faisalabad, with her parents Lateef Masih and Asia Bibi, and her brother Suleman.

20-  Sara Aslam, a Christian girl 17 years old, was kidnapped on gun point and raped on May 15, 2019. When the family pursues the case FIR No. 225/19 offence under section 376 PPC was registered against a Muslim man Ali Raza Shah, he was granted pre-arrest bail and he started to threat and to pressurize the family to withdraw the case. The accused openly threatened the family for life to force them for reconciliation.

21-  Hyderabad, an 11 years old Christian girl Nida was kidnapped from Joneejo colony Site area on 30 March 2019 by one Nazim who took girl for getting her biscuits. After few hours’ kidnapper telephoned mother of girl demanding ransom of Rs.20, 000 to bring at Bhit Shah and get her girl back. But kidnapper did not release girls despite receiving ransom of Rs.20, 000 from girl’s mother. Later mother approached Tando Adam Police which arrested kidnapper but instead of recovering kidnapped girl from him kept him in lock up for 3 days and handed him to Site police.

22-  Lahore, a 12-year-old Christian girl, Sadaf Emmanuel, was abducted from the forefront of the market at 9; 00 am on April 10, 2019, when she went out to buy milk for her grandmother tea in vicinity of Warburton.

23-  Gujranwala village Penaakh a Christian girl Mehrab Javed was attempted to kidnaped and tortured, her clothes torn by a Muslim man Muhammad Fahad while she was coming home from school by three wheelers.

24-  Shiekhupura village Bhattal, a pastor and his wife were attacked and tortured by Muslims.

25-  Lahore Sabzabagh, a Christian girl’s parlor was attacked and threatened to run parlor in the area by Muslims.

27-  Shiekhupura, Komal is a young Christian girl resident of a small town Ajniyawala. A Muslim man Atique Shah aged 32 forcibly entered in to her house and attempted to rape in the absence of her mother who was out for some work.

28-  Lahore, Malaika Sabir, a Christian girl 13 years old, resident of a small village of Raiwind, Lahore, is a student of 5th class. She was sexually harassed by a local Muslim named Riassat caste Jatt who forcibly entered in the house and harassed Malaika and tried to rape her.

Christian are the most vulnerable in Pakistani society and they have been used for everything. I had worked as a HRD Lawyer at grassroots hence as per my experience the number of unreported cases will be higher as victims’ families usually avoid taking police help due to the wall of silence by the police and the police side with such cruel and influential culprits.

In Pakistan, abduction of girls from Christian and Hindu minorities’ communities has been on the higher side since years. These girls after abduction are sexually assaulted, forcibly married to the abductors and forced into conversions. Some human rights groups define persecution in old fashion way but the persecutors have changed their ways to persecute religious minorities in a new way and they called it policy and it could be implemented at both by Government sector and at private sector. So, it is the need of time to define religious persecution in a broader-way and to believe it or not Pakistani Christians and Hindu are most vulnerable who are being persecuted by Islamic extremists objectively because their poor status and poor defense in society.

We through LEAD platform urge Government of Pakistan to make such laws which can protect Christians and Hindu girls by influential Muslims hands who use these both religious minorities' girls as they wish to use them due to no fear of laws as there are not proper laws in Pakistan which  can be implemented to protect such above said victims forced conversions and forced marriages. It is also our request to make sure of the implement of law and justice in Pakistan which at present is at not more than zero level in true sense.