Writing's on the wall: No #endAIDS without #endTB. By Shobha Shukla 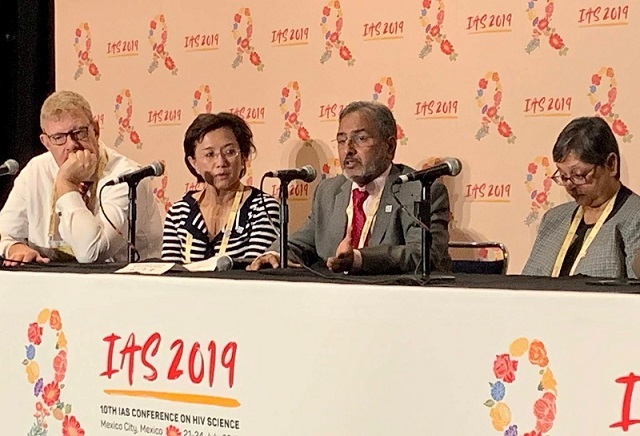 TB and HIV both are preventable, but cutting the chain of transmission of HIV and TB is proving to be a daunting task. Treatment exists for both TB and HIV but disease-burden and deaths every year are indeed alarming. With countdown on towards TB and AIDS elimination targets for 2030, the writing on the wall is clear: business as usual and 'more of the same' approach is more likely to fail us.

Despite being preventable and curable, TB continues to be the lead killer of people living with HIV (PLHIV) globally. As per the latest World Health Organization (WHO) Global TB Report, in 2017, 10.0 million people developed TB, 9% of whom were PLHIV. Also, there were 464,633 reported cases of TB among PLHIV and 300,000 deaths due to TB among HIV-positive people in 2017.

193 countries committed to achieve United Nations Sustainable Development Goals (SDGs), among which are targets to end TB and AIDS by 2030. But these goals cannot be viewed in isolation. Unless we end TB, we cannot end AIDS. With 78 months left for India to end TB (by 2025) and 138 months to end TB globally (by 2030) are we on track? These and other related issues were discussed at length at a session during the 10th IAS Conference on HIV Science (IAS 2019) held in Mexico.

Sense of urgency must drive TB and HIV responses

Dr Suvanand Sahu, Deputy Executive Director, Stop TB Partnership, stressed upon having a sense of urgency to move fast towards ending TB. While conceding that the UN High Level Meeting (UNHLM) on TB, which happened in September 2018, increased the political attention that TB deserved, he emphasised upon three main action points: (i) increasing domestic resources, especially in high TB burden countries (ii) finding those people with TB who have been missed in the past and (iii) making leaders, politicians and heads of countries accountable for the TB response in their areas in terms of key indicators, targets and commitments made.

Dr Ishwar Gilada, President of AIDS Society of India and Governing Council member of International AIDS Society (IAS), called for stronger partnerships between TB and HIV programmes at country and community level to beat the deadly bacteria-virus duo which can co-exist, especially in PLHIV.

Dr Paula Fujiwara, Scientific Director, International Union Against Tuberculosis and Lung Disease (The Union) cautioned to not ignore the connect between TB and non-communicable diseases (NCDs). For example, people with diabetes have a 2-3 times higher risk of developing TB. She gave the example of India, which carries the world's largest burden of TB with 2.74 million people suffering from the disease, out of which 86000 are HIV positive. India also has an

Emptying the pool of latent TB

Both Sahu and Fujiwara rightly insisted that ending TB by 2030 will not be possible without addressing this reservoir of people infected with latent TB by providing them with TB preventive treatment (TPT) to substantially reduce the probability of progression from latent TB infection to active TB disease.

At the 2018 UNHLM on TB, which brought unprecedented visibility and political attention to the long-standing fight against TB, countries signed a Political Declaration, and made a promise to put 30 million people on TB preventive treatment (TPT) by 2022, which includes 6 million PLHIV, 4 million children under five years old and 20 million other household contacts of TB patients.

Fujiwara shared the specific call to action made at the TB-HIV symposium (held just prior to IAS 2019) for a coordinated HIV and TB response to place 6 million PLHIV on TPT - a substantial increase from the 958,559 PLHIV, who were reported to be initiated on TPT in 2017, with South Africa accounting for the maximum chunk (39% of the total).

Dr Paula Fujiwara shared her 16 word mantra: "Treat all people with TB well, use new tools, make the investment and keep your promises."

Make timely treatment accessible to all

Fifa Rahman, Board Member for the NGO Delegation of Unitaid lamented that there is under investment in TB and medicines with fewer side effects are still priced beyond the reach of many people in low and middle income countries. She wanted countries to use TRIPS flexibilities to override patents that make drugs too costly to become accessible to all patients. Furthermore, “Funders need to take into account social determinants of health, which include criminalisation of sex workers, transgender people and people who use drugs, and political factors that lead to stockout of drugs and prevent medicines from reaching underserved populations”, she said to CNS (Citizen News Service).

For infectious diseases and HIV physician and TB survivor Dr Trupti Gilada, prevention, early diagnosis and effective treatment are key to ending TB. Alongside the use of TPT, she called for putting in place infection control methods (like wearing of masks), making point of care assays accessible to all, and reducing the time gap between diagnosis and putting patient on treatment.

While there are an array of prevention and treatment options for both TB and HIV, they are far from being implemented fully.

Mitchell Warren, Executive Director, AVAC, and President of TB Alliance's Stakeholders Association called upon the global HIV and TB community to have the wisdom, resources and political will to both deliver and use optimally the tools that are available, in a rights based human centric manner, and also to develop and implement additional tools, which need to complement- rather than compete with- each other, to end the two epidemics.

“For the next 78 months in India and 138 months globally in the TB response, and for the next 18 months in the HIV/AIDS response (to achieve the UNAIDS target for 2020), we have to collectively commit ourselves to targets that are audacious, achievable, measurable, resourced, have political and community will and have an accountability mechanism—for the donors to put in money, for industry to deliver the drugs, for healthcare providers to deliver to people, for activists to act in the right manner. No one should be off the hook when a target is missed”, said Warren.

Stigma is a stumbling block

Dr Ian Hodgson from The Work For Change, underlined that self-stigma or shame is a barrier for people to access TB treatment and care. According to him, self-stigma manifests in several forms like not seeking care, higher levels of depression, lower levels of disclosure, lower quality of life, low self-esteem, reduced self-efficacy, and lower treatment adherence - all of which are deterrents in the path to ending TB as well as AIDS.

Epidemics have joined hands. Will we unite?

Dr Gilada remarked that TB and HIV are caused by two different organisms that are poles apart, yet the two diseases have joined hands to create havoc in the world. TB is caused by a bacteria and transmitted through the air, while HIV is a viral disease that spreads through body fluids, like blood, semen, vaginal fluids, etc.

Time is running out to keep the promises for TB and AIDS elimination in next 138 months. If we are to deliver on these goals, firstly, we need to ensure that new cases of TB and HIV transmission are declining sharply enough to put the world on track to end these epidemics. We also have to make, undetectable equals untransmittable, a reality in life of every person living with HIV, and make 'TB is preventable, treatable and curable' a reality too, everywhere and for everyone, where no one is left behind.