The betrayal of the people of Jammu & Kashmir. EFSAS 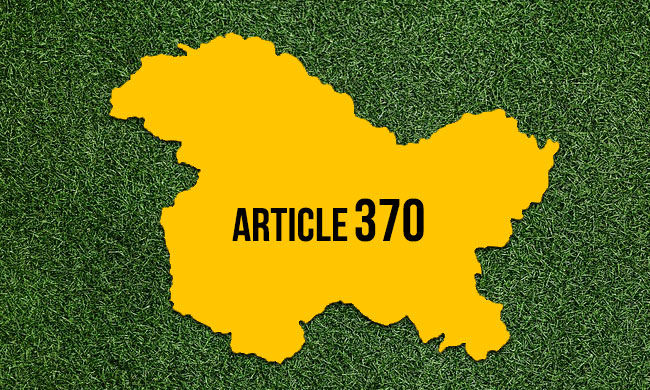 In its recently published Commentary, “The betrayal of the people of Jammu & Kashmir”, EFSAS comments on the Indian government’s decision to defang Article 370 of its Constitution, which gave the state of Jammu and Kashmir (J&K) its special status and the consequent autonomy, and argues that through a highly devious and dubious procedure this move is the biggest betrayal that the people of Kashmir have endured at the hands of the Indian State. By virtually scrapping Article 370 altogether, this Indian government has broken the solemn pledge made by the Indian State to the people of Kashmir in 1947, at the time that they chose to remain with India.

EFSAS further states that the manner in which the Indian government went about implementing its ill-conceived and contentious decision was anything but humane. As for democracy, all accepted norms and practices were thrown to the wolves. The decision was taken at a time when the state of J&K was placed under President’s rule, the state’s Assembly had been dissolved, and an appointed representative of the central government, the Governor, held sway. All major political leaders of Kashmir were rounded up by Indian security forces a couple of days prior to announcement of the decision. The Indian parliament was not even informed prior to the government’s decision to strip a state of the autonomy that it had been promised and constitutionally assured. Equally importantly, the state of J&K was, without any reference to the people of the state, bifurcated into two Union Territories to be governed from New Delhi. As a result, the procedure adopted by the Indian government to wring the changes to the status of J&K was unconstitutional and legally unsound at one level, and morally and ethically repugnant at another.

In addition, EFSAS argues that every tiny detail of the Jammu and Kashmir Reorganization Bill that the Indian government implemented went against what the people of Kashmir were clamoring for, and was anathema to them. Locking up Kashmiri political leaders even before implementation and ensuring that the people of the state remained cut off from all news and modes of communication reeked of distrust and was the antithesis of the idea of Kashmiriyat. Further, the Princely State of Jammu & Kashmir that signed the Instrument of Accession with India in 1947 has, through this Indian move, been effectively further sub-divided, something that all Kashmiris loathe. The legality of pushing through a bill that reorganized the state of Jammu and Kashmir and bifurcated it in two separate union territories, Ladakh and Jammu and Kashmir, without the concurrence of an elected state government, is not only highly questionable but also legally untenable. For Kashmiris, this is nothing short of demeaning, undemocratic, and psychologically unacceptable.

Looking beyond the political victory that the BJP scored through the Jammu and Kashmir Reorganization Bill, India may well find itself in more than a spot of bother because of its ill-considered actions. Goaded by Pakistan, which has reacted strongly to the Indian move and expelled the Indian High Commissioner from Islamabad, the international community is almost certainly going to be more invested on the Kashmir issue than it has been over the last few years, even decades. For instance, the United Nations Secretary General, Antonio Guterres, in a statement on 8 August cautioned against changing the status of Jammu and Kashmir and backed Security Council resolutions on the region.

EFSAS further deliberates that although sections of people in the Kashmir valley might be looking towards Pakistan, it must be noted that that is a delusional thought. Pakistan has betrayed the trust of the people of J&K numerous times and has proven umpteen times not be a friend of the people of J&K; The country invaded the Princely State of Jammu & Kashmir in 1947 in violation of a signed Standstill Agreement, annexed parts of it, then established its writ over Pakistan Administered Jammu & Kashmir through the Karachi Agreement in 1949, ceded a part of J&K to China in 1963, revoked the State Subject Rule in Gilgit Baltistan in 1974 and started its proxy war in J&K by supporting, financing and training terrorists causing the death of thousands of people while rupturing the social fabric of the state.

In conclusion, EFSAS argues that the clampdown that is currently in place in J&K will have to end at some stage. The reaction then of the people of the Kashmir valley to the abrogation of their autonomy will be the litmus test of the acceptability and success of the Indian government’s moves of 5 August. If the Indian government’s assessment that promises of economic betterment and good governance would trump the physical and psychological trauma of loss of special status and autonomy, not to mention breach of a pledge, proves to be correct, then its risky move would have paid off. But despite the massive build-up of troops in the state, to expect Kashmiris to passively accept their predicament would at this stage appear to be wishful thinking. Non-violent demonstrations and protests are bound to take place, as are incidents of stone pelting. Transgressions by Indian security forces in response will come under a magnified scanner, as is evident from the initial reactions of international human rights organizations to the striking down of J&K’s autonomy. A much larger number of Kashmiri youth joining terrorist groups and embracing radical ideologies is another serious threat that India may have brought upon itself.

This decision by the Indian government could lead India’s erstwhile friends in J&K to question whether instead of abrogating the autonomy of J&K, which was essentially a soft option as it involved mainly people already owing allegiance to India, it may have behoved the Indian government more to achieve what ought to be its real aim – to win back the parts of J&K over which India has clear title but no territory.

Instead of further dividing J&K, India ought to have fought the real battle to wrest back the parts of Kashmir that are legally its but are held and governed by Pakistan. That would have resolved the J&K issue to India’s satisfaction once and for all, while also reuniting all the people of the erstwhile Princely State.