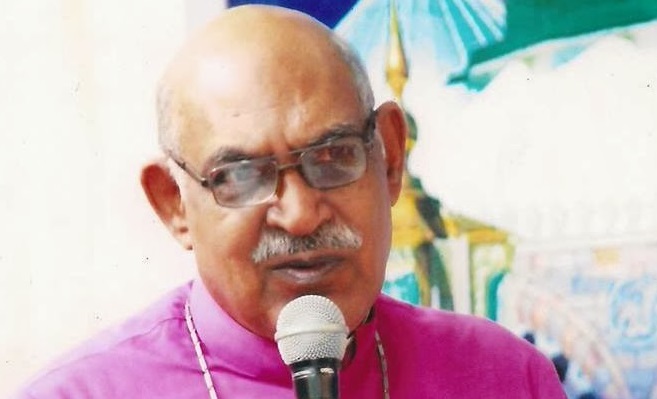 "Church of Pakistan is sick and needs our prayer, attention and proper medication for healing." The Church must be the "Tool of the Word of God" to set and improve spiritual standards in the lives of all people. Firstly, by preaching and practicing the Word of God and secondly by being a good witness of strong character to the people around us. For reformation and unity of the Church we must reiterate and implement the Doctrines of our Church, which states that:-

“…It accepts the Holy Scriptures of the Old Testament and the New Testament as the inspired Word of God, as containing all things necessary to salvation, and as the supreme and decisive standard of faith, and acknowledges that the Church must always be ready to correct and reform itself in accordance with the teachings of those Scriptures as the Holy Spirit shall reveal it.”

alled, big brother and small brother. Both of them overstayed in offices and both made arbitrary changes in the ‘Lahore Diocesan Trust Association’ and the ‘Executive Board of Methodist Church in Pakistan’. They blackmailed former bishops over property matters, which resulted in providing them ultimate power and lead to make puppet bishops. At times by making changes in rules for the elections of the bishops on the spot, thus affecting the policy and structure of entire Church.

Please take notice of the following: -

The elections held in 1997 were challenged in the Court of Law with the blessings of the then Moderator, also misleading office of the Archbishop of Canterbury for gains from properties, as he himself was the original candidate for Episcopate of Karachi. Thus, setting precedent of approaching forums outside the Church, resultantly all elections held thereafter have been assailed in the Courts outside the Church, and most of the present bishops in particular and the Church of Pakistan as a whole is still bearing the consequences.

2.      A) Declaration of the vacancy of Bishop of Peshawar.

The seat of Bishop of Peshawar was declared vacant in 1999 since on the face of record Mano was fulltime associated with USPG but the process of election was dragged.

B) Placing Mano again as Bishop of Peshawar in a situation when seat was declared vacant.

It is also an eminent unconstitutionality that Mano having resigned as Bishop of Peshawar and the Synod having declared the seat as vacant, again Mano was placed as Bishop till such time that a particular handpicked candidate could succeed. The proceedings of all forums of the Peshawar Diocese in continuation thereof are unconstitutional and void, so also is the election of present Bishop of Peshawar due to an unlawful electoral college of the Diocese.

3.      Election of Humphrey Peters, on the basis of Dimissory Letters.

As a matter of record the very Ordination of Humphrey Peters is based on "Dimissory Letters" issued by Bishop Mano in his aforementioned position, because of which he must be declared alienated from the Church of Pakistan.

(a) "Dimissory Letters" means that no Clergy and Ordination Committee and requirements for the Ordination within the Church of Pakistan were ever met.

(b) It also means that process of Ordination was intentionally hidden to achieve underlying motives, which is minting money from properties and projects.

(c) This also includes that impression to the Overseas Partners was given that Pakistan is not a safe place for Humphrey Peters; thus, defaming Pakistan’s image and mistrust on the legal system of Pakistan. This sums up to say that the sole agenda was to pocket money from Diocesan resources, including earthquake funding, All Saints Church bombing victims, etc.

(d) Having failed to pocket money from Mission Hospital, Peshawar proposed commercial project and Dera Ismail Khan, the only option left is to usurp money from Edward’s College, which had been declared a University under the system organized through the Governor of Peshawar, when the Governor during the tenure of Bishop Khairdin settled issue of Edward’s College and notified the installation of flag on the Car of Bishop of Peshawar. The agreements by the former management and leadership is binding on the successors of both sides.

(e)The most important aspect being overlooked is the admissions and education of Christian Youth in Edward’s College, as an established fact the administration is not entertaining and fulfilling educational needs of the Christian Community and the Church of Pakistan members, is it quite obvious that the only interest of the Diocesan Administration is in the property and assets of Edward’s College.

It is a conspicuous factor that policies and functioning of the Church of Pakistan have been spinning around various lucrative deals of Church properties throughout Pakistan, which not only have seriously affected the Mission and Ministry of the Church but also have damaged the reputation and image of the Church leadership. Projects over 180 Billion Rupees from Karachi, Mission Hospital Peshawar, DIK, Sukkur, Larkana, Gojra, etc. are some prominent examples which have been saved by undersigned through ‘Church Property Bachao Tehrik.

A huge amount of money have been laundered abroad by the leadership, in the event probe or investigation is initiated by NAB or other agencies, quite a number of  present and former bishops would be behind bars, bringing shame to the entire Church of Pakistan. The abettors whether Clergy or Laity must consider their oath to the Church and the Word of God.

Despite repeated orders passed by High Courts against the sale and lease of Trust properties still a number of bishops and those in hierarchy of the Church are involved in various such deals, due to which maneuvering and manipulation of property holding bodies is going-on, in turn creating unrest, disharmony and disunity among various Dioceses. Unfortunately, the role of the leadership is not positive for the benevolence and betterment of the Church.

The present crises in the Diocese of Raiwind is basically motivated with malice, which started by the appointment of Attorney by former bishop to illegally collect money from Raiwind’s overhead bridge. The prevailing crisis in the Diocese is being supplemented and exaggerated through various means to achieve particularized underlying objectives, further damaging the unity and discipline of the Church. Huge amount of money is being invested by those who laundered money abroad and an indiscreet inquiry would reveal persons investing money to prolong the chaos and crises in the Diocese for personal gains.

8.      Undertaking of LDTA Chairman in the Balochistan High Court.

Since most of the property of entire Church still vests in the LDTA and present Chairman has undertaken before the Balochistan High Court that no trust property can be sold, leased, gifted and/or alienated in any manner being the trust properties. As a consequence of such undertaking given to the High Court there is no scope of manipulation and blackmailing of bishops administering various properties within their respective Diocesan jurisdictions.

The policies formulated by the former regime/bishop requires revisit for betterment of the entire Church of Pakistan and its members, which will surely flourish health and unity of the Church as a whole. Prior to when Bishop Malik by fraud made arbitrary and illegal changes in the Memorandum and Articles of Association of LDTA, representation from all over Pakistan were source/members of LDTA. As such, all maneuvers and manipulations of LDTA properties including Edward’s College, Peshawar are void and of no legal value.

9.      Separation of Lahore Diocese from the Church of Pakistan.

The Supreme Court of Pakistan specifically took notice of the situation of UCH, Lahore and noted bad role of Church leadership at large, the cause of bad governance and failure. I hereby ask all Church leaders to publically announce what responsible steps have been taken to safeguard the UCH Hospital and its benevolence for our coming generations.

11.  Reformation and United of the Church.

Unity of the Church has to be preserved, which is at stake due to unjust and ulterior motives of a few. Reformation and revisit of our policies is need of the time. Thus, I hereby prayerful ask the leadership to let us correct and reform our Church of Pakistan by eliminating every misdeed committed intentionally or unintentionally, to save our Church and the communal assets, its Ministry and benevolence, in view of our Doctrines.

An Appeal to the Members of Church of Pakistan

Including Bishops, Clergy and Members, I humbly request that fearing God and remembering the Canonical Oath, by taking the Word of God in hand. Prayerfully we all unite to agree that we will not support dishonest orders of the Leadership and Executives from today onwards.

I also request the former Bishops to refrain from supporting rouge elements and their lobbies based on our future interests, as it may lead to moral, spiritual and legal controversies damaging our Church system, Youth and future generations which have been left astray only for the reason that while the big ones are making Billions of Rupees illegally, no institution is being setup for the youth and children, even the already existing boarding houses are being shut down to be sold away.