No place for journalists in Pakistan. By Manzoor Ahmed 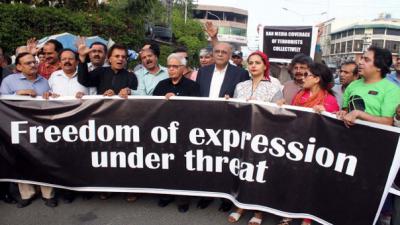 According to a report by the Freedom Network that released on the ‘International Day to End Impunity for Crimes against Journalists’ on November 2, 2019, shockingly announced that 33 journalists have been killed in Pakistan during the last six years while doing their jobs. It could be corroborated from a deplorable figure declared by the Pakistan Press Foundation, that since 2002, 48 journalists have been killed in targeted attacks and 24 for their work till 2019. Another 171 suffered serious assaults and 77 minor attacks. Also, 18 got arrested, 26 detained and 36 booked in different cases. The World Press Index of 2019, released by the ‘Reporters Without Borders’ showed Pakistan stood at 142 place out of 180 countries.

These figures in it project the fact that the security and safety of journalists in Pakistan is a critical issue, and the high number of causalities also suggests that perpetrators of the crimes often go unpunished, giving them thumping moral to take another victim in hand. These kinds of acts in Pakistan have the State institutions backing and remind the journalists to tow their line or fall prey. Furthermore, their pitiable prosecution gives a reprieve to killers. It was noted that mainstream media does not cover cases pertaining to journalist’s fatality unless warranted by foreign media, as such, numerous cases buried in files, lacking any hue and cry.

The case of American journalist Daniel Pearl who was kidnapped and killed in Pakistan, reminds the world of how journalism and journalist are in poor state, as mainly both are controlled by Army and intelligence

Another case which made headlines in 2017 was of a reporter with in local English daily, who was attacked in daylight for publishing some investigative stories, by some armed motorcyclists in Islamabad. Journalism in Pakistan touched a new low, as various separatist movements in the country are not reported. The social activists of Pashtun Tahafuz Movement (PTM) often raise their concerns through social media, which goes unheard to deaf Pakistani authorities. Instead of resolving their disputes, social activists and journalists reporting their cause often found their names in missing persons and mostly disappeared by law enforcement agencies. Hundreds of such cases of PTM activists and Baloch are buried in files with no clues or FIR of missing ones. Journalists’ space further shrinks after Pakistani Media Regulatory Authority (PEMRA) in mid-2019 imposed media restrictions, covertly on the direction of current regime, to not to highlight negative aspects relating to government, army and intelligence agencies. This draconian PEMRA direction curtails freedom of expression and lead to an environment where the press freedom in Pakistan becomes more unsafe and less inclusive.

According to the Report of Freedom House 2019 regarding internet freedom, Pakistan has dropped a rank lower to 27th out 100. This report also noted that State authorities had upped their efforts to silence critical journalists and activists using a range of techniques. Users were sentenced to death on charges of posting blasphemous content online, although their convictions were under appeal.

The report also observed that most online commentators exercised a degree of self-censorship when writing on topics such as religion, blasphemy, civil-military relations, separatist movements, and women’s and other minority communities’ rights. The journalists find it difficult to present unbiased news and information to audiences. It demanded the government to aid media houses in creating a safe space along with giving the liberty of speech to internet users. Social media sites, like, Twitter authorities did not cooperate to curb any dissenting voices, which is why several journalists and activists shifted using it as means to voice out their concerns or protest against poor policies of the government.