TB preventive therapy saves lives: Why is the rollout so poor? By Shobha Shukla 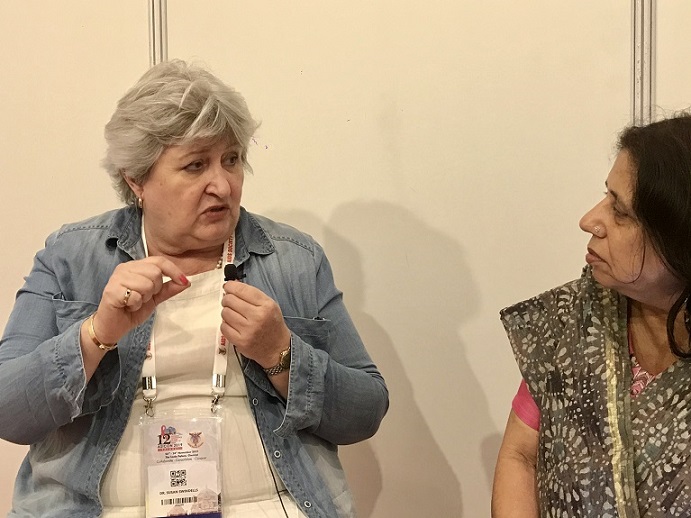 When tuberculosis (TB) is preventable and curable, is it not shocking that it still remains the biggest-killer-infectious-disease worldwide? According to the latest WHO Global TB Report 2019, 1.5 million people died of TB last year, and between 1.5 to 2 billion people are infected with latent TB. Only a very small part of this latent TB infected population will progress to active TB disease. Latent TB infection is also preventable and treatable, significantly reducing risk of progressing to active TB disease. But the grim reality is that progress on addressing latent TB pool is dismal.

"TB is a disease that can be prevented and treated. So there is not much excuse, as we can do much better. We know that TB preventive therapy is effective, and is also effective in people living with HIV, but the uptake globally is very poor. Very few people with HIV (who are at greater risk of progressing from latent TB to active TB disease), are offered TB preventive therapy" said Dr Susan Swindells, Professor, Department of Internal Medicine, and Medical Director, Speciality Care Clinic, University of Nebraska Medical Center in USA. She spoke with CNS (Citizen News Service) at the 12th National Conference of AIDS Society of India (ASICON 2019) in Chennai, India.

Dr Susan Swindells, who is a senior scientist on HIV and TB (and latent TB), reflects on reasons for poor uptake of TB preventive therapy. "Reasons for that are several. First of all, conventional TB prevention therapy takes a long time. It is at least 6 or 9 months. TB treatments have side effects. TB drugs have not developed as quickly as drugs for HIV. Now we have HIV drugs that are very potent and work extremely well with basically no side effects, but for TB we are still dealing with drugs that have side effects."

"There is so much priority on giving antiretroiral therapy to people living with HIV that TB preventive therapy often gets forgotten. I think we have some exciting opportunities now – we have new shorter courses for treatment to prevent TB that are as good, if not better, than the standard six months of isoniazid. Four months of rifampin works well, weekly isoniazid and rifampin for three months works very well, and study I co-chaired that was recently published, show, that one-month of daily isoniazid and rifapentine works well too" said Dr Swindells.

"The beauty of one month TB preventive treatment is that completion rates (number of people that completed the treatment) is the highest that is ever seen because taking treatment for a month is possible for most people than longer duration therapies for six months. Because one month was short there were fewer side effects and this one-month therapy for TB prevention was as effective as longer duration therapies. So we are excited that the WHO is looking at including this in their guidelines, and we hope there will be greater uptake of this one month TB preventive therapy in many countries globally, including in India" said Dr Swindells.

This study that showed one-month TB preventive therapy is as effective as longer duration ones, was funded by the National Institutes of Health (NIH) in US, in which over 3000 people (with HIV and no active TB disease) participated in several countries globally (such as India, Thailand, Haiti, Peru, Brazil, and many sub-saharan African nations like South Africa, Botswana, Kenya, Uganda, among others). One group of people in this study, received one-month shorter regimen, and the other group received the standard six-months isoniazid TB preventive therapy. This study also showed that the protective effect of one-month therapy lasted at least for 3 years.

More potent drug is not yet available everywhere: Why?

"Rifapentine which is a more potent drug than rifampin or rifampicin unfortunately is not yet available everywhere. I believe the approval in India is pending as we speak. It is approved in a few countries, but right now it is a lot more expensive than the standard therapy" said Dr Swindells. Dr Ishwar Gilada, who is a member of government of India's Technical Working Group on latent TB infection, informed that very recently 3HP (rifapentine and isoniazid, given once weekly for 3 months) has been approved and will be soon made available in national TB programme.

Dr Swindells called for dual actions for improving access to rifapentine to those in need: 1) lobby with the manufacturer to reduce the cost; and 2) and ideally, getting the generic drug manufacturers in India to make a combination tablet that will be easier for patients.

She said as per current evidence and guidelines, people living with HIV will benefit from TB preventive therapy whether they have latent TB infection or not (with or without test for latent TB).

Dr Srikant Tripathy, Director of National Institute for Research in Tuberculosis (NIRT) of the Indian Council of Medical Research (ICMR) said in ASICON 2019 that there are 3 new studies about to begin on TB preventive therapy in NIRT. One study with The Aurum Institute in South Africa will evaluate if giving 3HP (rifapentine and isoniazid, given once weekly for 3 months) once in a year, and repeating it in the second year, will provide any additional protection. But getting rifapentine was a problem for this study. Second new study on TB preventive therapy at NIRT will evaluate feasibility of introducing 3HP in national TB programme of India (formally called the Revised National TB Control Programme). Third new study on TB preventive therapy at NIRT will assess if we can reduce transmission of TB by providing 3HP to all household contacts regardless of age.

Speaking on side effects of TB preventive therapy (TPT), Dr Susan Swindells shared that "There are two important side effects of TPT: it can cause inflammation of the liver and hepatitis which can be quite severe rarely – this is something we need to be watchful about to make sure that people do not get liver inflammation. The other side effect is peripheral neuropathy which effects the nerves mostly of the hands and feet and starts with numbness and tingling before it can progress to a painful condition - if it is not recognized then it could become irreversible. These are the 2 most serious side effects that can happen in a very small number of people who take TPT."

Dr Swindells shares her concern on alarming diabetes rates in several countries including India. Research needs to answer lot more questions on drug-drug interactions and best treatment options for people with multiple conditons such as diabetes, TB, HIV among others.

In lead up to the World AIDS Day 2019, Dr Swindells hopes for a long-acting drug for TB too (an area of research she may pursue soon) just like a long-acting injection therapy for people living with HIV has proven to work (2 drugs for HIV given together by injection every month or in some cases, every other month).