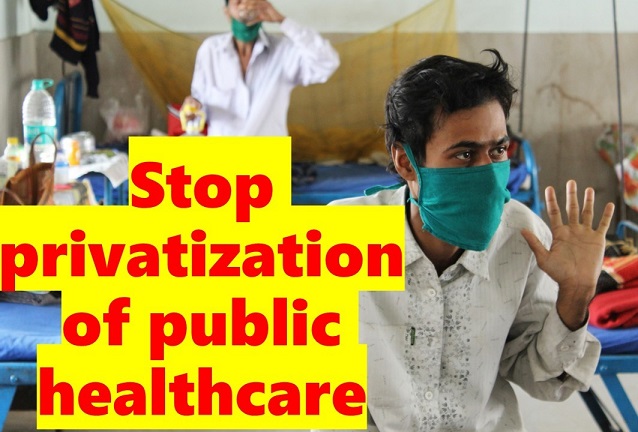 In late November 2019 Khwahish Warsi, a daily wage earner who makes his living by making and selling 'dholaks', the Indian percussion instrument, who did not have one pelvic joint, met with a major accident and suffered major fracture in both his legs. He was taken to the trauma centre of the King George's Medical University (KGMU) in Lucknow, India. Because of major rush here he could not be admitted for two days and was ‘advised’ to seek treatment in private hospital. That is how he landed at a private hospital in the city. Even after he had borrowed Rs. 1.1 Lakhs (around US$ 1500) from his village in Barabanki he could not muster half the amount the hospital was asking to go ahead and perform the surgery which included putting iron rods in his legs. Had it not been for some charitable individuals he would not have been able to make all hospital payments. But everyone may not be as lucky.

A senior citizen was not so lucky to get much-needed healthcare when government-run hospital declined him services. Health activist Rahul Dwivedi shares that in January 2020, a 72 years old patient was referred by government-run Bahraich District Hospital (in UP, India) to government-run tertiary-care hospital KGMU for urgent dialysis and specialized care. Patient who was already struggling to meet expenses in Bahraich, came under even more pressure to raise money to meet expenses for the ambulance transfer to Lucknow-based KGMU. When he reached KGMU despite his deteriorating condition, after several long hours of waiting, he could eventually get the preliminary checkups done for admission in medicine department. But was later 'advised' by a senior faculty to rather go to a private hospital in Lucknow. Duty doctors however referred him to outdoor patients' department (OPD) of another government-run Dr Ram Manohar Lohia Institute of Medical Sciences. But being a weekend, he had no money to stay in state capital Lucknow for additional two nights and try his luck on Monday morning (13 January 2020). He returned back to Bahraich without much-needed life-saving treatment and care.

When will we walk the talk on right to health?

The best judge if we are respecting right to health is: how the poorest of the poor, and most marginalized sections of the society, are accessing healthcare.

The Niti Aayog has unveiled a plan to hand over district government hospitals to private players. It claims that the guiding principles for the public-private participation scheme will be based on “international best practices”. Firstly, worldwide in countries where health security for all citizens especially the most marginalized is guaranteed, it is through stronger public health systems, and not private. Secondly, public-private partnerships result in benefitting the private sector only, and thus is privatisation in garb of 'doing good'. That is why we condemn this Niti Aayog's plan to privatise India's public healthcare system (and other public services too).

It should be remembered that the Indian government's per capita expenditure on healthcare is among the lowest in the world (and in the South Asian region). The World Health Organisation (WHO) recommends that countries spend at least 4-5% of their GDP on health to achieve optimal healthcare outcomes. In the current central budget, the percentage of funds allocated for healthcare is 2.25%. This comes to about 1.4% of the GDP, which is much less even than the 2.5% of GDP goal for 2025 which is set by the National Health Policy of 2017. In contrast, India spends about 10% of its budget on defence. Several African nations committed to spend 15% of their budget on health (Abuja Declaration of 2001). In 2019, the Delhi government allocated 14% of its budget to healthcare.

In the absence of the political will to provide adequate funding to something as basic and essential as healthcare, placing the blame of the system's dismal performance on public sector inefficiencies and presenting this as a justification for privatisation, is clearly disingenuous. The problems of inadequate facilities, understaffed clinics and overworked and poorly performing personnel, which plague healthcare in India, are all linked to a lack of financial resources and bad governance, and cannot be solved without stronger government's commitment to public health, which includes significantly increasing healthcare expenditure. Privatisation can only lead to superficial short-term improvements, while inevitably reducing access for most-in-need by driving up costs, taking us even further from the goal of universal healthcare.

India has promised to deliver on the promise of universal health coverage (UHC) where "no one is left behind" in its National Health Policy of 2017 and UN Sustainable Development Goals. But privatisation of public health is pushing us backwards from these goals which are rooted in the human rights to health. The vision of universal healthcare coverage - which leaves no one behind - can only be achieved from robust and well-funded public health system which is not running on cost-to-cost or for-profit motives.

People belonging to marginalised communities such as Dalit and other lower castes, Adivasi/Tribal communities, women and other minority groups, face the greatest obstacles in accessing proper healthcare. This is due to a combination of the general low economic status of these groups, as well as deeply entrenched, systemic prejudices against them. In such a scenario, it becomes even more important that instead of abdicating its responsibilities, the government exercise its powers to regulate the healthcare sector in a way which minimises bias and exclusion and ensures equal access to all. A private, profit-driven healthcare system on the other hand, will only deepen these faultlines by inevitably prioritising those who can afford to pay for its services over those who can't.

Some of the best, most efficient and inclusive healthcare systems in the world are government-run. The healthcare systems of countries like Canada, Iran and Sri Lanka are shining examples. Private cannot substitute the public. We must stop believing the illusion that privatized system of healthcare is better. There is a need to believe in the government system and to make it accountable to the people.In India too, the current Delhi government has made remarkable strides in improving access to quality healthcare among the general public by making significant investments in close to 450 primary healthcare centres around Delhi, called Mohalla Clinics, and ensuring they are well-staffed and properly equipped. The Niti Aayog would do well to take note of these international and domestic best practices.

Public health is not an 'industry'

One cannot ignore the fact the private players are there only so long as profits are to be made. Will these private players continue to play their role in so-called 'public private partnerships' if cost-benefit ratio is not in their interest? Health is not an industry, rather right to health needs to take primacy over trade.

It is common sense that we cannot mop the floor when the tap is still running on it. Neglecting preventive healthcare and focussing on curative healthcare is another major problem which makes 'curative healthcare' an industry. For example, by opening the markets for air purifiers and private on-payment lounges for 'fresh air', will we solve the problem of air pollution (and linked deadly diseases such as lung cancer)? Focussing on preventive aspect does not mean shifting priorities and competing with curative component, but both go in tandem.

Also, some industries are knowingly pushing products and lifestyles that is programmed to kill (and cause disease). For example, tobacco, alcohol and Big Food companies. With raging epidemic of non-communicable diseases (NCDs) causing over 70% of deaths, we have no choice but to hold these corporations to account (legal and financial liability). Heart diseases, stroke, cancers, diabetes, chronic respiratory diseases are among the major NCDs, a significant number of which is preventable.

It is constitutionally possible to ban alcohol and tobacco. There are Indian states that have banned alcohol (north-east states, Bihar and Gujarat for example). Gutkha (a chewing tobacco form) was also banned by the government, within existing legal and policy framework, although several other forms of tobacco continue to be consumed in India. So despite overwhelming scientific evidence linking alcohol and tobacco to deadly diseases and other ill-effects, what is preventing government to end alcohol and tobacco, and hold industries to account? Governments have aimed to reduce alcohol by 10% by 2025, but intend to end TB 100% by 2025 - but TB is linked to alcohol and tobacco use too!

We know TB is preventable and curable, but for almost 1.5 million people who died of TB in 2018 globally, it is not preventable and curable. TB is the world’s biggest killer-infectious disease, and India has the highest burden. We are failing to prevent transmission of TB, as last year almost 10 million people got newly infected with TB globally. If we are serious about health security “where no one is left behind” we have to strengthen public health systems.

Health is a fundamental human right and it is government's responsibility to ensure that every citizen "where no one is left behind", is able to fully realize her/his right to health.