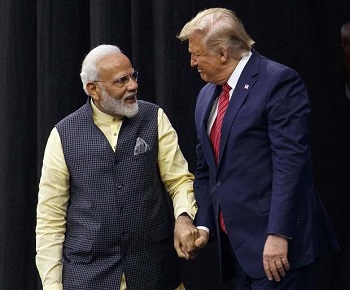 Those questioning the takeaways from United States (US) President Donald Trump’s visit to India may be guilty of missing the woods for the trees. The inability of the two countries to hammer out even a limited trade deal before Trump’s visit began, as also the absence of any other bilateral agreement of substance being inked during the visit, were interpreted by many as indicators of the visit being high on pomp and personal bonhomie, but bereft of materiality. Despite appearing to reflect, on the face of it, an accurate impression of the visit, such an assessment actually misses the broader, more critical and strategic attainments, especially from the viewpoint of Indian Prime Minister Narendra Modi’s government.

Trump’s first port of disembarkation in India was Ahmedabad in Modi’s home state of Gujarat. He was received with warmth on 24 February, and amidst much fanfare, with tens of thousands of people lining the streets from the airport to the Sardar Patel cricket stadium in the city. This was where Modi reciprocated Trump’s gesture of the ‘Howdy Modi’ event in Houston in September last year with an impressive, well attended, and lorlorful ‘Namaste Trump’ program. Trump, well into an election year, had begun tweeting even before he left US shores about the massive numbers that were waiting to greet him in India. He was visibly delighted to address the audience of close to a hundred and twenty five thousand at the stadium. Both Trump and Modi waxed eloquent about each other and their respective leadership qualities, praised the status of bilateral relations and predicted an even brighter future for ties. These first few hours after Trump landed in India were cleverly tailored to be right up Trump’s alley. It created the ideal atmosphere and set the tone for the more fundamental official talks ahead.

Trump and Modi held five hours of talks on 25 February. The US and India announced three memorandums of understanding on mental health, the safety of medical products, and a letter of cooperation on energy supplies. Deals for India’s purchase of 24 MH-60 ‘Romeo’ helicopters and 6 Apache attack choppers from the US for over $3 billion were also signed. Importantly, the two countries agreed to work towards an early conclusion of the fourth and final bilateral foundational military pact called the Basic Exchange and Cooperation Agreement for Geo-Spatial Cooperation (BECA). The BECA will enable the US to share advanced satellite and topographical data for long-range navigation and missile-targeting with India. Harsh Vardhan Shringla, India’s Foreign Secretary, informed after the talks that “President Trump has assured that he will give the highest consideration to India for procurement, technology and joint collaboration in the defence sector”. Shringla added that India and the US had held talks in five major categories – security, defense, energy, technology and people-to-people contact, and that Trump and Modi had decided to move towards what was referred to as a “big deal” in the trade sector.

By themselves, the list of memorandums and the defense deals struck during Trump’s visit would not add up to qualify the visit as a grand success. From the Indian government’s perspective, what made it so was what Trump said during the various events on his itinerary, as also, equally significantly, what he consciously chose not to say.

The narrative on Pakistan that emerged during the visit was one that the Indian leadership would have taken great satisfaction from. Shringla confirmed that Pakistan had figured in the discussions between the two leaders, and on cross-border terrorism India’s “concerns were put on the table”. The joint US – India statement issued during the visit stated that “Prime Minister Modi and President Trump denounced any use of terrorist proxies and strongly condemned cross-border terrorism in all its forms. They called on Pakistan to ensure that no territory under its control is used to launch terrorist attacks, and to expeditiously bring to justice the perpetrators of such attacks, including 26/11 Mumbai and Pathankot”. The two leaders also called for concerted action against all terrorist groups, including Jaish-e-Mohammad, Lashkar-e-Taibah, Hizbul Mujahideen, the Haqqani Network, D-Company, Al-Qaeda, Islamic State of Iraq and Syria and Tehrik-e-Taliban Pakistan.

Separately, at the customary press conference following the talks, Trump said that the challenge posed by terrorism was discussed “at great length”, and that PM Modi had very strong views on it. “Modi is a very religious man, he is a very calm man, but actually he is a very, very strong person, and very tough, actually. I have seen him in action. He has got that foremost on his mind (to deal with) terrorism. He will take care of it”. Meanwhile, Modi, in his media statement, said that both sides had taken a decision to further increase efforts to hold supporters of terrorism responsible.

With the US – Taliban negotiations back on track and the talk of a peace deal possibly being concluded on 29 February, India has been apprehensive that these developments could put Pakistan back in the driver’s seat in the US’ scheme of things. Consequently, the US pressure on Pakistan to act against terror could wane. The statements by Trump on Pakistan assuaged this fear. Trump reportedly also assured Modi during their meeting that India’s interests in Afghanistan would be protected even in the event of the deal with the Taliban going through.

On Jammu & Kashmir (J&K), another of the Indian government’s core concerns, Trump did, once again, offer to assist in resolving the dispute between India and Pakistan. India is averse to any international involvement in the J&K issue, which Trump appeared to appreciate when he added, “Kashmir obviously is a big problem, but India and Pakistan are going to work it out. They have been doing it for a long time”. This fitted in perfectly with the Indian government’s take on the matter.

A burning issue in India over the last few months has been the Citizenship (Amendment) Act (CAA). Protests, mainly peaceful, have raged across the country against the CAA ever since it was pushed through the Indian Parliament by the government in December last year. The Indian political opposition, civil society groups, as also international organizations and groupings have been vocally critical of the Act for introducing a religious consideration to provision of citizenship to refugees, which they claim violates India’s secular Constitution. Critics link the CAA to the Modi government’s stated intention to implement the National Register of Citizens (NRC), which seeks to document all the legal citizens of India so that the illegal migrants can be identified and deported. They allege that these exercises are aimed against Muslims, who constitute the largest religious minority in India. The Indian government has responded to internal critics by asserting that the CAA was passed after due debate in the Parliament, and that the Act only seeks to provide citizenship to refugees and not take anybody’s away. To external voices, the government has been firm in its position that the CAA was India’s internal matter, on which international organizations had no locus standi.

Foreign Secretary Shringla claimed that the CAA had not figured in Trump’s discussions with Modi. He said, “The issue of CAA did not come up, but with regard to what you mentioned, the term religious freedom, there was appreciation from both sides that pluralism and diversity are a common binding factor of both the countries”. Trump confirmed this when he stated that “I won't discuss the CAA, I'll leave that up to India and hopefully they will do the right thing”. Trump’s stand was as clear an endorsement of the Indian government’s position of the CAA being an internal matter as could have been possible. For the Indian government, this was a huge positive from Trump’s visit.

On the eve of Trump’s arrival in New Delhi, some localities in the Indian capital erupted in a wave of mindless violence, allegedly ignited by provocative speeches by local political leaders. By the time Trump arrived, 13 people had already been killed in clashes between anti and pro CAA protesters and over a hundred had been injured. The situation only got worse during the day that Trump spent in the city. Reports suggested that Muslims faced the brunt of the attacks amidst allegations of a sluggish response by the police. Available data, however, reveals that both Hindus and Muslims were killed. In response to questions by the media on the violence, Trump said that “As far as individual attacks are concerned, I have heard about it but I did not discuss it. That's up to India”. He did not budge when pressed, and reiterating that it was India's internal matter, he repeated, “It is really up to India”. He added, “I will say the Prime Minister was incredible on what he said ... He wants people to have religious freedom very strongly. And he said in India they have worked very hard, they have great and open religious freedom”. Trump’s refusal to sermonize and moralize on the issue and his expressed disinclination to wade into India’s internal affairs would have been heartily welcomed by the Indian government.

The White House issued a statement on the visit titled, ‘President Donald J Trump is strengthening our strategic partnership with India’. The parameters of this strategic alignment were spelt out in this statement. It averred that “The United States is working closely with India to combat terrorism, confront global drug trafficking and promote a free and open Indo-Pacific. President Trump and Prime Minister Modi are calling on other countries in the region to take steps to counter terrorism. The United States–India defense cooperation contributes to the prosperity and security of the entire Indo-Pacific region”.

Commenting on Trump’s visit, the Foreign Policy magazine opined that “the broader trendlines in the US-India relationship continue to seem robust, as shown by the visit itself”. In an op-ed on Fox News, James Jay Carafano wrote that “The US and India have forged something new and unprecedented. We are not old-fashioned treaty allies, but we are way more than just friends. This is a vital strategic partnership. We know that from the most distant Pacific Island to the Middle East we have each other’s back. This is a new geostrategic reality in the world”. Former Indian Ambassador to the US, Arun Singh, said, “The Prime Minister emphasized that this (India - US) was a defining partnership for the 21st century. President Trump said that the relationship is stronger than ever before. Both are now describing it as a comprehensive global strategic partnership”.

From the Indian government’s perspective, the fact that the advantages and leverages that it had developed over the years in its relationship with the US were eventually paying off would be very satisfying. India, owing to Pakistan’s close ties with and utility for the US, had long been judged on a harsher, more unequal yardstick of international norms. Strategic and security imperatives had often trumped values and principles, and India had repeatedly found itself at the receiving end. Even Pakistan’s blatant support to terrorism directed against India was by and large condoned as it did not directly impact the West, and because Pakistan was useful in the larger scheme of things.

Trump’s visit demonstrated that the tables had turned.