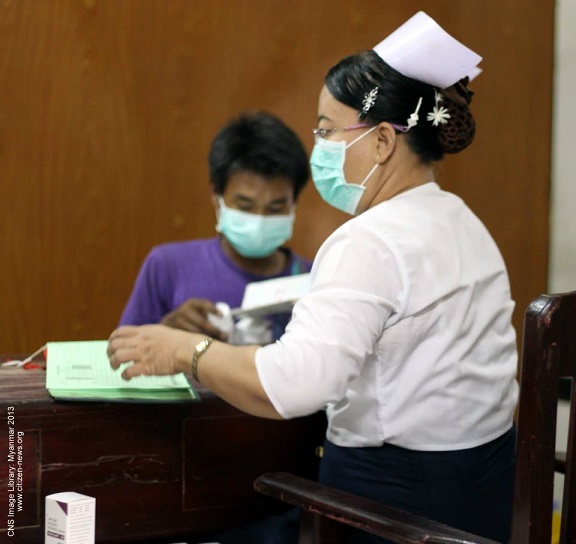 To mark International Nurses' Day on May 12, millions of nurses around the world are calling on governments to commit to universal public health. "As we rebuild from the coronavirus disease (COVID-19) crisis, we must transform the way societies are organised. We must organise our societies around the capacity to care. We must all recognise the union adage - Touch One Touch All - if our healthcare systems cannot care for all, we are all at risk" rightly said Kate Lappin, Regional Secretary of Population Services International (PSI) for Asia and the Pacific.

This year 2020 becomes significant as the World Health Organization (WHO) declared it as the International Year of the Nurse and the Midwife, in honour of the 200th anniversary of Florence Nightingale's birth.

Nurses have been on the frontlines of healthcare even during emergencies and other crises situations historically. Despite facing a real danger of contracting the COVID-19, they are also facing the real threats to their labour laws and rights.

walk the talk on celebrating role of nurses in health security

"Along with recognizing the important work nurses are doing, we also need to raise our political demands as we look ahead in the future having to deal with pandemics and infectious disease as part of our lives" said Wol-san Liem, Director of International Affairs, Korean Public Service and Transport Workers’ Union, South Korea.

South Korean response to COVID-19 was relatively better than most other nations with 2-3% of infections occurring among healthcare workers, 10 of which were among those who were caring for COVID-19 patients. South Korea provides national health insurance which became critical in face of the pandemic, but it does not have enough public hospitals. A closer look exposes the need for more work to be done to “ensure nurses and other healthcare workers stay safe so that they are able to continue to save lives” said Wol-san Liem.

For instance, by mid-February public hospitals were overwhelmed with the COVID-19 pandemic, putting nurses under acute pressure. There was a severe lack of nursing capacity, particularly of nurses, who were trained in infectious diseases and intensive care management. Several COVID-19 positive individuals who were in-need of healthcare, were not able to get a hospital bed in Daegu City of South Korea. 23% of early deaths happened outside of hospitals, shared Wol-san Liem. The proportion of public healthcare facilities in Korea is among the lowest in OECD countries. Plans for increasing the healthcare workforce have also faltered. The number of doctors at public healthcare facilities continues to decrease. In response to chronic staffing shortages, the Korean government had proposed legislation for the establishment of a national public health and medical university, but lot more action is yet to happen in that direction. Liem demands Personal protective equipment (PPE) for all healthcare workers including those who are subcontracted.

Jibin TC from United Nurses Association in India, said out of over 65,000 COVID-19 cases in the country, more than 1000 have occurred among the nurses (2 among which were in Kerala). PPE for nurses continue to be a persistent challenge, as most of the PPE were being imported from other countries including China. Inadequate quarantine and isolation facilities for nurses remains a challenge. Unions of nurses are not engaged in policy making for infectious diseases and pandemic preparedness in India on the same footing at which medical doctors’ unions get a seat at the table. Majority of the decisions were being taken by those who are from non-nursing background. As a result of which, nurses could not be informed and trained adequately for COVID-19 response in every healthcare facility in the country uniformly. Guidelines set by the Indian Council of Medical Research (ICMR), Ministry of Health and Family Welfare, Government of India, struggle to get fully translated into action when it comes to nurses. Nurses’ unions had to step in to organize online briefings on COVID-19 management protocols and guidelines. Jibin echoes the shortage of nurses, as the country has 1 nurse for 60-70 beds whereas the national guidelines are for having 1 nurse for 6 patients.

Recognizing violence and harassment faced by nurses and other healthcare workers in India, government announced an ordinance which makes "acts of violence cognizable and non-bailable offences and for compensation for injury to healthcare service personnel."

Judith Kiejda, Assistant General Secretary, New South Wales Nurses and Midwives' Association, Australia, echoed that the biggest issue facing the nurses’ community is PPE. One of the major reasons for PPE shortage is that manufacturing is not domestic.

Unlike India where unions of nurses struggle to get an equal footing at the policy setting stage, in Australia, nurses have a voice in shaping national pandemic preparedness plan. However, last such plan was made in 2008, so Judith and her association members are calling for regular pandemic planning.

Jillian Roque, Migration Advocacy officer, Public Services Labour Independent Confederation, Philippines, also echoed that nurses are facing serious work exhaustion being overworked and underpaid. Due to lack of PPE, some of them improvise by using garbage bags. With public transport coming to a halt it has added to the woes of the nurses as they struggle to get back home. There have been incidents where they faced discrimination and violence, denied entry into their own homes, or grocery or shops. A nurse was even splattered with chlorine, shared Jillian.

Nurses from the Philippines are also on the frontlines of COVID-19 response in other nations worldwide. "Some of them have gotten sick some are in quarantine, some exhausted, and some have died. A nurse in London working for National Health Services (NHS) had died while undergoing quarantine. A nurse in New York got infected due to lack of PPE and died" said Jillian.

"We want the government to come up with rights-based responses, prioritize PPE to all healthcare workers and frontliners. We demand that they must get just pay, hazard pay, and other benefits accorded to other workers. In terms of long-term steps, we want systemic changes as we need to be away from policies that led to this crisis in the first place" said Jillian. "We do not only need to keep calling our nurses ‘heroes’, rather we need decent work, decent pay, and protection of our rights."

In public sector, salaries for nurses are standardized but in private sector, salaries are not standardized, so many nurses are earning way below than public sector wages. "Nursing or teaching jobs where women dominate in terms of numbers, are usually the jobs not well paid. Nurses are paid lower than police or military for example" shared Jillian, even though their work puts them at risk and nurses are on the frontlines of this public health emergency. Community health workers are also less paid and almost all of them are women, which is not a coincidence but points towards deep-seated gender-based inequalities.

"We need to collectively come together and signal to the government that we do not want this day to be only about applauding nurses, but we also need this day for governments to act and make those words meaningful" said Kate Lappin. She shared that over 100 organizations that represent over 300 million workers have issued a 'No Going Back' call on the International Nurses’ Day. This call recognizes:

- Healthcare must never be dependent on the capacity to pay

- Trade must enhance the capacity of nations to provide quality public healthcare, not restrict it

This No Going Back call demands governments to work with nurses and their unions to develop public health reconstruction plans. It calls upon governments to remove all obstacles, including intellectual property rules, in existing trade agreements and rules that hinder timely and affordable access to medical supplies, such as lifesaving medicines, devices, diagnostics and vaccines, and the ability of governments to take whatever steps are necessary to address this crisis. It also asks all governments to support the proposal by the Government of Costa Rica to develop a ‘global COVID-19 commons’ for all research, data, technology, treatments and vaccines relating to COVID-19 as a non-proprietary shared global resource.

This No Going Back call, demands that the World Bank should stop providing funds for public health to the private health industry and for the International Finance Corporation to stop promoting health privatisation which includes the flawed model of Public Private Partnerships. The IMF should cease directing governments to cut public spending and public sector wages.

"We need to be coming together and demanding responses that are more just and supportive of public health services" said Kate. Touch one – touch all, the old golden value of the unions, have become even more relevant today in crises times. We are all vulnerable - but some are more vulnerable than others - till we can move away from an economy, that, is based on driving maximum profits for few and elevating risk for many more.