My State is not My Mother. By Maham Sindhi 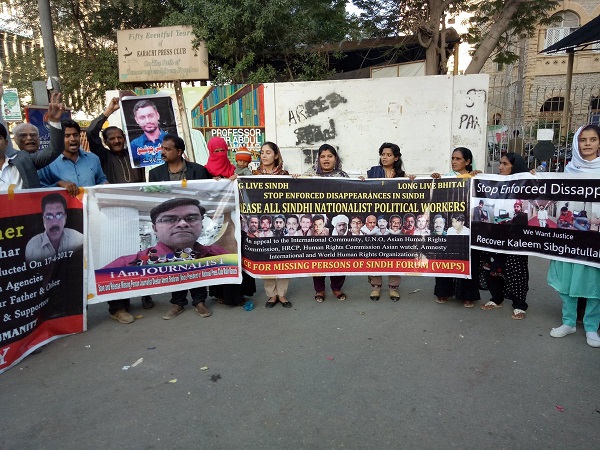 A state is considered not only Feeder of its citizens, but it has responsibility to protect their lives, properties through implementing law. A state is also compared with a mother, which sacrifice at every stage to improve lifestyle of her child. Unfortunately, our State Pakistan, failed to realize us the Love, care and affection of a mother. It's behavior to us is like a step mother, or like a enemy, who is not sincere with her child. Some victims of our state also claimed that: "our state is like a witch, which is now eating own kids."

Recently the son of Renowned Sindhi writer and poet Taj Joyo, Professor Sarang Joyo, who himself a Research officer at SZABIST, was forcefully abducted from his home at Mahmoudabad, Karachi on 10th of August. In the darkness of night, some unknown people entered in the house, physically tortured to her wife Sohni Joyo, and Sarang was picked up by these forces. Although he is returned to his home on midnight of 17th August, but there is no information about Sarang's where he was, and who are behnid his abduction?  On 14th August, When the whole Pakistan is celebrating the Independence Day, a example of simplicity, keeping a pen in the front pocket of his Qamez and with tearful eyes, Mr. Taj Joyo looking for his Son and protesting outside Karachi press club for all missing persons. On Same Day President Arif Alvi announced the name of Taj Joyo for the award "Pride Of performance" which will be given to him on Pakistan day 23rd March 2021. But Hats off to Mr.Taj Joyo , who refused to get this award. A lollipop of award is such a joke at that time, when my son and many other Sindh’s are missing. He further said " On one side My Son was forcefully picked, I am crying for my son on the roads, and other side the government is awarding me with this prize, what a cheap joke with me?".

Not only the one Sarang Joyo, but many Sindhi, Baloch’s and Pashtuns are disappeared by the state agencies, but No any political party, including PTI talking about to recover missing persons. The Chairperson of BNP, Mr. Akhtar Mengal had demanded to recover missing persons, when he voted to Imran Khan in national assembly, and when Mr. Khan become Prime Minister, he promised to fulfill their demands. But still Baloch’s are missing, and Akhtar Mengal left the Government benches and now they are sitting with opposition parties. Enforced disappearances of citizens violates the basic human rights, and this inhuman act are faced by families in Pakistan. Human rights commission of Pakistan (HRCP) , Amnesty international also condemn and reject that kind of cruel act against humanity, they have much more concerns about the missing persons in Pakistan. Many Government and non-government organizations has raised voice against missing persons, and clearly said, if someone is involved in illegal acts against country, Registered FIR against him, and bring him in the court. Our law is present to punish the Criminals, to investigate about his crime. Abduction of citizens are not acceptable so far or sending their tortured bodies is not a way to punish anyone. It is humiliation of citizens and their families. When a child does a act of bad habits, her mother punish him, guide him, but never kill him. In our Syllabus books, we read the lessons about State, which is resembling to a mother, but we never find out a mother like our cruel state, which is ignoring the lives of innocent citizens, and have no check balance on agencies to stop them from enforced disappearances. Talking to media, in a complaining languge Mr. Joyo further asked to the authorities that : "Why Sindh is  not receiving its due shares in Water and on other resources, Sindh is not a colony, but a province with all natural resources, Why we are living as refugees, as we are son soils of this land."

Following the protest of Voice of missing persons (VMP) in the Karachi, Chief minister of Sindh Syed Murad Ali Shah directed to the provincial police to bring back Sarang Joyo, also PPP Chairperson Bilawal Bhutto Zardari said to his secretary Senator Mustafa Nawaz Khokhar to raise voice for Missing person Sarang Joyo in the Senate Human rights Committee. With all these efforts, Sarang Joyo is backe to his home, but what about other missing persons? We find many examples in back days, as in month of July, capital city Islamabad witnessed, the Famous Journalist Matiullah Jan, who openly criticize to the military establishment, was picked in the morning by some unknown armed men. This news goes viral, the most powerful weapon of public social media is flooded with the trends to bring back this journalist, even the International media demands for his safe recovery, and he was recovered at night about 11:30pm. We don't know exactly, who are they, what they want, and why they are involved to disappear the persons, which have no exact involvement in any big crime? But as we are citizens, our state is answerable to us, and we have right to know about these forces, who are behind this crime of abduction? If state is really a mother, It must be proved. It is not a single case of Sarang Joyo, but many other persons are missing from homes, and family have no information about them, even they don't know, our closed ones are alive or not? They are continuously praying for safe recovery of their Son's, brother's, husband's etc., but they get hopeless, when along with police all other authorities and government did not co-operating with them, and behave as these forces are above the law. The Senate Commission about missing persons has declared the figure, and according to these numbers, about 2138 persons are missing, but more than Seven thousand FIRs are Registered in different police stations, from the relatives of missing persons. It means the numbers of missing persons are more than the offical record of that commission.

Famous American Social activist and Minister, Martin Luther King Jr. Had quoted in his life that: "Injustice anywhere is a threat to justice everywhere.”  So, When Justice is prevailed from the institution of the state, there is no place of injustice in the country, and state will be treating like a mother to citizens. Our Mom's always fought for our rights and justice in their lives, so if state is like our mother, then why not state is ready against injustice and criminal acts against citizens.