Embarrassment of riches: Are we doing enough to avert tobacco deaths in Indonesia? By Shobha Shukla and Bobby Ramakant 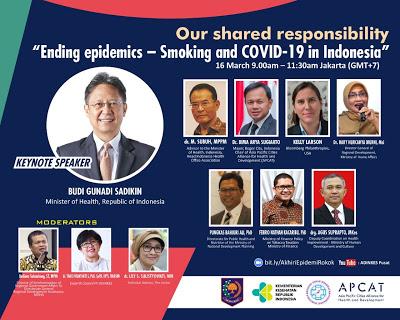 Tobacco kills over 8 million people every year worldwide, with over 235,000 deaths occurring in Indonesia alone. Each of these untimely deaths could have been averted because we have evidence-backed measures to not only control tobacco use, but also to accelerate progress towards ending the tobacco-caused multiple epidemics of several preventable diseases. Tobacco use is a major common risk factor for not only the biggest cause of death worldwide- cardiovascular diseases (heart diseases and stroke)- but also for a range of other non-communicable diseases (such as, cancers, diabetes, chronic respiratory diseases, among others) as well as for communicable diseases (such as tuberculosis and Covid-19).

Studies from several countries have shown how tobacco smoking increases the risk of life-threatening severe outcomes of Covid-19. "We know that smoking increases the risk for ICU admission, need for mechanical ventilation and even death due to Covid-19. There is no excuse for inaction because tobacco epidemic is entirely preventable" rightly said Dr Tara Singh Bam, Director for Asia and the Pacific region, International Union Against Tuberculosis and Lung Disease (The Union).

But tobacco smoking rates increased during the Covid-19 pandemic by 1% in Indonesia, confirmed Indonesia's Health Minister Budi Gunadi Sadikin, who was the keynote speaker at an important meeting on "Our shared responsibility: Ending epidemics – Smoking and Covid-19 in Indonesia", co-hosted by Indonesia's Directorate of Synchronization of Regional Government Affairs III, Ministry of Home Affairs; Directorate of Noncommunicable Disease Control, Ministry of Health; Association of All Indonesian Health Offices (ADINKES); and Asia Pacific Cities Alliance for Health and Development (APCAT).

Among the measures required to prevent a significant number of life-threatening diseases, tobacco control is perhaps the easiest - because it is entirely preventable. That is why this meeting gives hope for much stronger action against not only tobacco use but also against the ongoing public health emergency of Covid-19.

Budi Gunadi Sadikin appealed to everyone to follow all health protocols to break the chain of transmission of Covid-19 - which includes staying away from tobacco. He said that people who are more vulnerable to Covid-19 include tobacco smokers. Tobacco smokers have a higher risk of getting infected with corona virus (due to weaker immune system) as well as they are more likely to develop severe symptoms due to Covid-19. He emphasized that, "Covid-19 symptoms are severe for those who smoke compared to those who do not smoke. Research in Spain and Thailand shows that smokers are also more likely to get infected with Covid-19."

The Health Minister rightly said that controlling tobacco will also help control TB. Governments have promised to end TB globally by 2030. The WHO has clearly stated that tobacco smoking substantially increases the risk of TB by more than two-and-a-half times, as well as, increases the risk of death from TB. More than 20% of global TB incidence may be attributable to smoking.

He underlined that reducing tobacco use will have a positive impact on preventing both non-communicable as well as communicable diseases. However, despite commendable tobacco control efforts, the rate of children and young people beginning tobacco use is on the rise. Tobacco advertising, promotion, and sponsorship plays a key role in luring children and young people to get addicted to nicotine. More alarmingly, data shows that among the active smokers in Indonesia, 24% are in the age group 20-29 years, 29% in 30-39 years, and smoking is more prevalent (and rising) in lower socio-economic groups. "More poor people buy cigarettes before they buy nutritious food" he said. The WHO also has stated this fact: "Most tobacco-related deaths occur in low- and middle-income countries, which are often targets of intensive tobacco industry interference and marketing."

Health Minister of Indonesia called for engaging other ministries, such as the Finance Ministry, to raise tobacco taxes and excise, revise laws and policies on addictive substances, increase the size of graphic pictorial health warnings on all tobacco products to 90%, ban the sale of single stick of cigarette, and ban all forms of tobacco advertising, promotion, and sponsorship.

politics is the ultimate determinant of health

Dr Bima Arya Sugiarto, Mayor of Bogor City of Indonesia and co-Chair of Asia Pacific Cities Alliance for Health and Development (APCAT) said that political will and commitment to control (and eventually end) tobacco use is paramount. “Bogor city has gone through a long process to cement political will and commitment for tobacco control. We are continuously strengthening, and not weakening, existing health policies. In the past there were attempts by others to weaken health policies but we managed to overcome them by stronger laws” shared Dr Bima Arya Sugiarto.

He also shared that despite bullying tactics, he resolutely went ahead in advancing health promotion in Bogor. It is not only about law enforcement, but we must also promote healthy lifestyles. Preventive measures are most effective measures- like having safe spaces for cycling, jogging or other physical activities are important if we want people to choose healthier lifestyles, he said.

Indonesia is among one of the countries worldwide that share a big burden of not just tobacco use, but also diseases fuelled by tobacco use- be they tuberculosis, heart diseases, stroke, cancers or other chronic respiratory diseases, or even Covid-19. CNS (Citizen News Service) believes that the global public health emergency of Covid-19 (and cascading humanitarian crises) has put the spotlight on the writing on the wall: health security for each one of us is central to not just development but also to our economies. The #ClockIsTicking with just 117 months left to deliver on the promises of sustainable development.