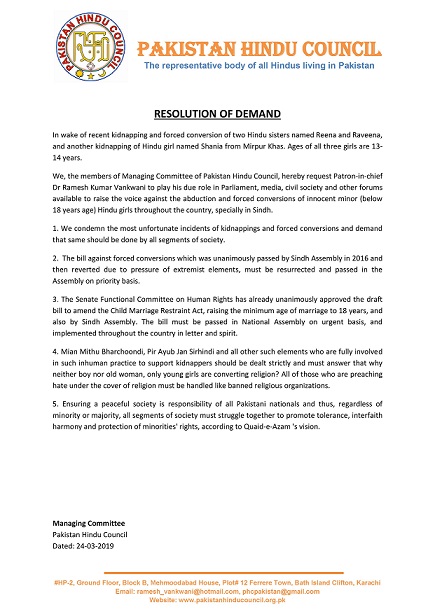 ISLAMABAD / KARACHI: March 24, 2019. (PCP) A five-point resolution seeking to end the kidnapping of Hindu girls and forced conversions would be tabled in the next session of National Assembly. According to a resolution draft circulated on Social Media, prominent Hindu lawmaker Dr Ramesh Kumar Vankwani was asked by Pakistan Hindu Council to play his due role for raising voice in parliament, media, civil society and all other forums available, in wake of recent kidnappings two Hindu sisters named Reena and Raveena, and another girl Shania from Mirpur Khas. Ages of all three girls are around 13-14 years.

Dr Ramesh Kumar, according to resolution draft, demanded that the most unfortunate incidents of kidnappings and forced conversions must be condemned unanimously by all honorable members of parliament. "The bill against forced conversions which was unanimously passed by Sindh Assembly in 2016 and then reverted due to pressure of extremist elements, must be resurrected and passed in the Assembly on priority basis, " said the resolution draft.

The resolution also mentioned that Senate Functional Committee on Human Rights has already unanimously approved the draft bill to amend the Child Marriage Restraint Act raising the minimum age of marriage to 18 years, and also by Sindh Assembly. According to Dr Ramesh Kumar, the bill must be passed in National Assembly on urgent basis, and implemented throughout the country in letter and spirit.

Dr Ramesh Kumar, in his resolution, also demanded to take strict action against controversial religious elements including Mian Mithu Bharchoondi and Pir Ayub Jan Sirhindi for their alleged role in supporting such inhuman practice. He asked the parliament to seek answers from such elements that why neither boy nor old woman, only young girls are converting religion? "All of those who are preaching hate under the cover of religion must be handled like banned religious organizations," the resolution stated.

The resolution to be presented by Dr Ramesh Vankwani, concludes that ensuring a peaceful society is responsibility of all Pakistani nationals and thus, regardless of minority or majority, all segments of society must struggle together to promote tolerance, interfaith harmony and protection of minorities' rights, according to Quaid-e-Azam 's vision. Meanwhile, Dr Ramesh Vankwani, in his video message, also thanked Prime Minister Imran Khan for taking timely action on this sensitive issue.