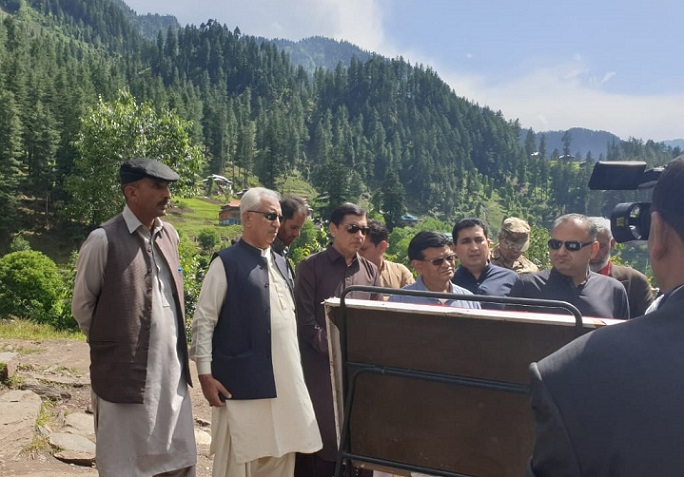 Dr Ramesh Vankwani, sharing details of recent visit, said that the ancient holy site of Sharda Peeth is attributed to Hindu Goddess of wisdom and knowledge. The holy site of Sharda is equally respectable for all people, he said, adding that once people around the region used to travel here for learning various skills and arts. “I am highly obliged to PM Raja Farooq, who along with his cabinet and speaker of the AJK Assembly, welcomed us warmly to discuss revival of ancient holy site,” he said, assuring to extend fully cooperation with the AJK government in this regard.

Dr Ramesh Vankwani, answering a question, said that Pakistan Hindu Council has recommended opening the Sharda Peeth initially for Pakistani nationals and all visits must be arranged via Islamabad-Kohala route. “The access for those in Indian-occupied Kashmir may be considered in the next phase, depending upon the trade and travel opening, “he said.

Dr Ramesh Vankwani, while commenting on recently-launched report by the US on religious freedom, urged India to take solid steps for the protection of minorities' rights. He said that the opening of Kartarpur Corridor and revival of Sharda Peeth demonstrate the commitment of Pakistani leadership for regional stability, world peace and protection of minorities’ rights. He demanded that India must also ensure similar reciprocal arrangements. According to Dr Ramesh, when both Korean countries can come closer and the Wall of Berlin can be demolished than why India is still hostile of bitter past? He said that promotion of faith tourism must be top priority by both sides.

“It is indeed a great honour for me to visit the Sharada site as the first Hindu follower since the partition in 1947. The visit not only fulfilled my religious sentiments but also strengthened my commitment to promote interfaith harmony and faith tourism in Pakistan, and project the positive image of our beloved country as well.” He said.

On the occasion, Dr Ramesh also vowed that Pakistan Hindu Council with the support of AJK government would transform Sharada Peeth a role model site that belongs to a non-Muslim minority in a Muslim majority country. “I am quite confident that the place, known for learning, will once again succeed in showing people how the rights of minorities can be protected in a state,” he said.