Miracle Woman Evicted by Her Hindu Son After Conversion to Christianity 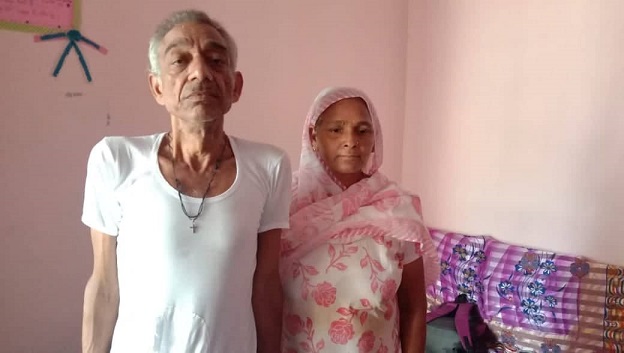 India: October 11, 2019. (PCP) A Christian converted couple were forced out of their own home by their Hindu son when they left Hinduism after experiencing a miracle.

Champa Digwal (55) and her husband Sultan (58) became Christian when she was miraculously cured of continued bleeding after she heard of similar story in the bible in Matthew 5:25-29, when a woman with continual premenstrual bleeding was cured by touching Jesus’s cloak.

The miracle biblical story of healing inspired Hindu Champa to attend church and experienced her own miracle when her own bleeding stopped after 12 years and converted to Christianity.

Her husband also became a believer after witnessing the miracle and are now both thankful to God and are regular attendees at their local church with an ever-strengthening faith.

Their Hindu son Rohtas Digwal(35), who has not accepted his parents' conversion, evicted them both out of their own home after arguments developed and is accused of beating his parents.

Rohtas whose hatred of his parents grew, at one stage wished his father dead when Sultan was bitten by a snake but survived despite not seeing a doctor and believing in only prayer.

Sultan’s kidneys and lungs have shrunk through suffering from asthma for 15 years and is fast losing weight. So Initially church Pastor, Sushil, funded Sultan's medication of 2500 Ind Rupees (£28) at the expense of his own children’s school fees. He also provided them with temporary shelter.

Initially BACA were going to run an appeal to provide a home for Champa and Sultan, however with the help of our BACA officer, Pastor Shusil met with other local Christian leaders and Hindu leaders and a delegation travelled to their former home and spoke with Rohtas. Hearing directly from Hindu leaders that it was wrong from him to oust his parents form their own home with their fragile health, had the required affect. Rohtas has now allowed Champa and Sultan to return to their home and he has allowed them to retain their Christianity without fear of violence or eviction from him.

Our BACA officer remains in contact with the elderly couple and will continue to monitor their situation. If any further assistance is required, we have left the door open for further support.

Juliet Chowdhry, Trustee for the BACA, said: "Emotions can run high in India especially in a country steeped in honour culture.

"The reaction of Rohtas is not uncommon - he will no doubt have felt it was his duty to protect his Hindu faith from his parent’s conversion and equally been fearful of the loss of his reputation before other Hindus.

On this occasion by working with local Hindu leaders we have been able to restore peace and reunite a family, even if somewhat tenuously.

However, Champa and Sultan will need your prayers as they re-engage with their son.