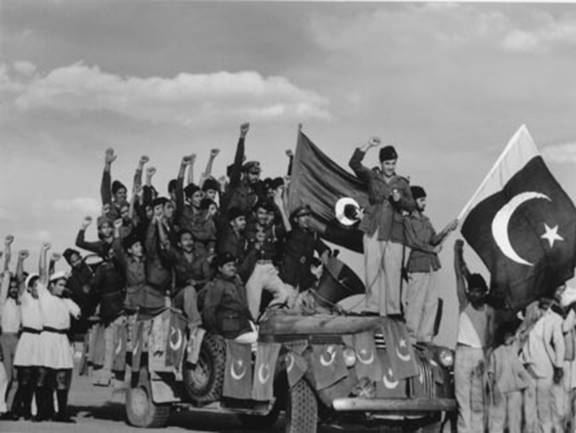 Srinagar: October 23, 2019. (By Farooq Gandabali) Contrary to the past when separatists used to observe October 27, the day Indian Army landed in Srinagar, as Black Day, a group of young and energetic persons this year changed the trend by observing October 22 as Black Day in Jammu and Kashmir. It was on October 22 when tribal militia backed by Pakistani Army invaded Kashmir in 1947.

To observe October 22 as Black Day, Jammu and Kashmir Youth Development Forum (JKYDF), a youth forum represented by people from different walks of life, organised a conference in Srinagar to discuss the negative role of Tribal Invasion on Kashmir in 1947.

The speakers during the conference highlighter how Tribal militia unleashed reign of terror and unprovoked aggression against people of Jammu and Kashmir violated state’s sovereignty.

“In the past years Pakistan sponsored hurriyat leaders used to force Kashmiris to observe Black Day on October 27 which coincides with the arrival of Indian army in Srinagar. People were led to believe that their problems started after 27th October 1947, and Pakistan provided funds and support to all anti-national groups including Hurriyat Conference who observe Black Day on October 27,” said Advocate Waseem Gul, Vice President of JKYDF.

“Matter of the facts is that our sovereignty was violated on 22 October 1947 when hordes of tribesmen from North West Frontier of Pakistan attacked and invaded J&K State. They mercilessly killed and looted people. Religion was not an issue to them and their victims included Muslims as well as non-Muslims. In fact, first person who was killed by these so called Jihadis was a Muslim from Muzaffarbad area of Pakistan Occupied Kashmir,” he added.

The conference was first of its kind and attracted a lot of interest by the concerned stake holders. People from all walks of life which included lawyers, journalists, doctors, businessmen, politicians and students participated in the seminar and declared that the Tribal Invasion was designed to force the Maharaja of Jammu and Kashmir to join Pakistan.

Waseem said, “Our struggle is not against Pakistan or Pakistani people; It is against injustice and wrong policies of Pakistan and its agencies played from last 65 years in Jammu and Kashmir.”

“It is a historic fact that the State of Jammu and Kashmir was independent after the end of the British Raj and that Tribal Invasion was supported by Pakistani authorities in clear violation of the Standstill Agreement concluded between the Maharaja government and government of Pakistan,” he added.

She said Pakistan has divided people on different issues they kill their own people and nobody is safe in Pakistan. She said the democratic system of Pakistan has been occupied by its army.

Advocate Sajad Rasool Shah, a social activist and Secretary Utthaan Mission Trust in his speech said, “The Tribal Invasion was planned and supported by government of Pakistan, and its aim was to punish the Maharaja of Jammu and Kashmir who refused to accede to Pakistan. It divided our beloved motherland and divided families of the state. It killed innocent Kashmiri men and women. It plundered and looted Kashmiri resources. It is the main cause of our present miseries and troubles.”

Mushtaq Ahmad Tantary , Vice President J&K Political Moment (I)  expressed his serious concern on the rise of religious intolerance in areas of Pakistani Occupied Kashmir and Gilgit-Baltistan. “Lashkar-e-Tayyaba and other jihadi groups have entrenched their positions in POK and the puppet government of POK has instructed the local administration to accommodate the Pakistani and other jihadis by all means possible, including in madrassahs and sate run schools,” he said.

Waheed Jeelani  , a law student of Kashmir University said, “The Tribal Invasion communalised the Kashmiri politics in which people of the State suffered immensely and it was this unprovoked attack.”

Bashir Ahmad Sofi a renowned social worker and Secretary National civil society forum said that Pakistan has adopted terror as its state policy and it started with attack on Jammu and Kashmir on Oct 22, 1947. He said that terrorist regimes active in Jammu and Kashmir including Lashkar-e-Toiba, Hizbul Mujahideen, Alumer Mujahideen and Jaish-e-Mohammad, are nothing but part of its regular armed forces who are getting regular pay and perks besides tenure in a particular area.