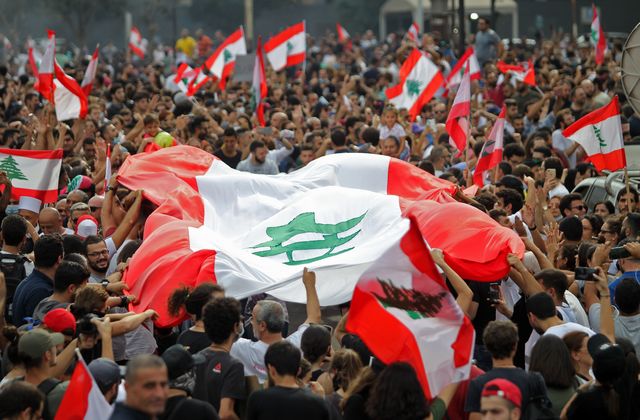 Washington, D.C: October 27, 2019. (PCP) It’s been nine days of peaceful, anti-corruption protests across Lebanon. Lebanese citizens, both in the country and abroad, have taken up the slogan calling for the resignation of the government, “كلّن يعني كلّن”, which translates to “all of them means all of them”.

These protests have been notably nonsectarian, showing the people of Lebanon coming together across party and religious divides to demand a better future. Tragically, IDC has confirmed that Hezbollah has turned to violence as they feel their influence threatened, attacking and injuring many peaceful protesters.

In Defense of Christian’s concerns are two-fold.

First, Hezbollah and its affiliates, supporters of the Iran-backed terror group, attacked and threatened protestors in Beirut, South Lebanon, and the Bekaa region. Additionally, videos of protestors being beaten and driven out of public spaces have been surfacing across social media to showcase the situation.

Thursday night in Beirut saw a substantial increase in tensions when Hezbollah supporters attacked protestors, and riot police had to separate the group a number of times. Reports indicate that several people were injured, and recording equipment of journalist were vandalized by the group of thugs.

These criminal attacks show Hezbollah is trying to silence its Shiite supporters who are actively calling out the organization for failing to act in their interest, instead choosing the interest of the Iranian regime.

Hezbollah is facing intense pressure to thwart the protests, and it has been reported that  Commander Qazem Soleimani of the Iranian Revolutionary Guard Corps’ Quds Force arrived in Beirut on Wednesday to provide support. In a speech Friday, Hassan Nasrallah, Hezbollah's Secretary-General, attacked the legitimacy of the protests, spinning conspiracy theories that the CIA and Gulf states are behind the unrest.

IDC’s second concern is the tension between the pro-government supporters and members of the press. On Wednesday, MTV Lebanon confirmed that Hezbollah has explicitly threatened the safety of its reporters. This is not only undemocratic in its very nature, but also highlights the extent of terror that Hezbollah has repeatedly placed on the Lebanese people.

Furthermore, supporters of the government have also harassed female reporters on the streets, and these interactions are not limited to MTV Lebanon, but are an issue being faced across the media community.