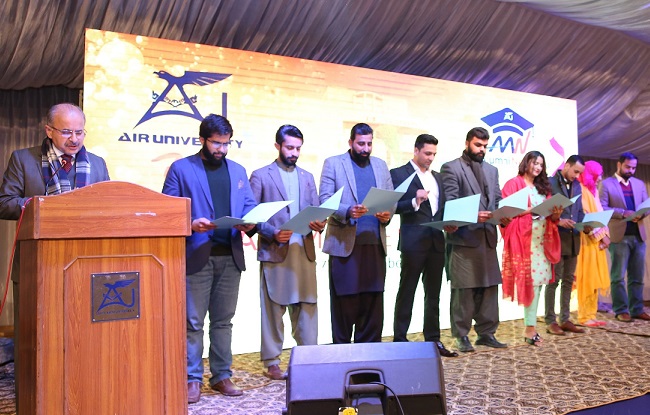 ISLAMABAD: (PCP) Vice Chancellor of Air University AVM (R) Faaiz Amir has said alumni are the real strength of Air University who are serving on key positions at national and international levels, and thus, making their alma mater proud. He was addressing to the oath-taking ceremony in honour of newly-elected Executive Committee members of Air Alumni Network (AAN). This year, the ceremony was most distinguished feature of the annual alumni homecoming / reunion event, in which as many as 500 graduates participated with full passion and zeal. On the occasion, different interesting activities, including musical chair, singing contest, and sky lantern, were also held.

The Vice Chancellor, who is also Ex-officio Chairman of AAN, while congratulating the winning candidates, emphasized to strengthen efforts in order to transform a vibrant alumni platform for exploring various emerging opportunities related to knowledge sharing, professional networking, capacity building, and career development. Faaiz Amir further urged the alumni community to stay committed and build a strong bond to make Air University even more distinctive and valuable for future generations.

The first-ever elections of Air Alumni Network were organized by the Department of Student Affairs, in which the Shaheen group faced the Pioneers panel. However, the Shaheen group secured a landslide victory in elections, winning the slots of president and other major positions. Saram Dastageer, newly-elected President AAN, in his winning speech, said that winning or losing is a part of election process. "From now onwards, there will be no pioneer or Shaheen group, now it’s just a Alumni Betterment Panel," he announced, while emphasizing the need to learn with the worthy experience of seniors and taking solid steps to achieve targets for the betterment of Air University and entire alumni community.

Hanan Akhtar, candidate of President from Pioneer Panel, also demonstrated sportsmanship and open-heartedly congratulated all winners. On behalf of his panel, he assured best cooperation for the success of alumni network wherever and whenever required. "We are humbled by your love, kindness and immense support," Hanan, who is the graduate of early 2002 batch said.