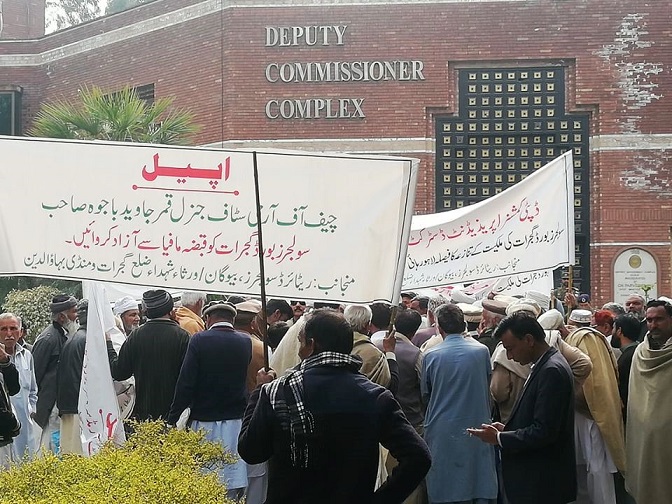 Mandi Bahauddin: (PCP) Ex-servicemen of district Gujrat and Mandi Bahauddin held a joint meeting on Wednesday at District Armed Services Board (DASB) Gujrat under arrangement Pakistan Ex-Servicemen Society (PESS) to condemn the apathy of Gujrat district administration for not taking action against land mafia that have been illegally occupying a portion of DASB building and land. Major retired Sher Muhammad Gondal president PESS Mandi Bahauddin chaired the meeting. Giving history of DASB land, Sher Gondal said that in 1957 late Lt Col Raja Muhammad Akbar SJ from Mandi Bahauddin purchased a piece of land measuring 9 Kanal 5 Marla behind the office of DPO and constructed soldiers house and 13 shops. Cost of land and construction was managed through donations contributed by affluent personalities including late Ch Zahoor Elahi. Shops were rented out and income accrued from them was spent on welfare of deserving ex-servicemen’s widows.

In 1993 Gujrat district was partitioned into two districts when Phalia Tehsil was upgraded to district with Mandi Bahauddin as its headquarters. Thereafter the tenants stopped paying rent and organized themselves into a mafia.

When asked to vacate the shops and soldier house, they filed false suit in the court and obtained stay order. The civil court decided the case in favor of DASB. The mafia then challenged the judgement in Lahore High Court Lahore.

In 2018 after hearing, the LHC referred the case to DC Gujrat directing him to submit detailed report on the matter in dispute within thirty day. The DC did not bother to comply with the direction so far due to which case is still pending in the LHC.

The meeting then turned into rally that marched to DC office where ex-servicemen protested and demanded of DC to send the report to LHC and get vacated the occupied portion of DASB premises from the land mafia. The participants of the rally were carrying banners inscribed with slogans ‘DASB be got vacated from mafia’, appeal to COAS and DC for help. They also raised slogans Pak Fauj Zindabad and Pakistan Zindabad. DC, ADC (R) and ADC (G) were absent from the office.

However, on listening slogans ADC (finance) came out and addressed ex-servicemen. He said ex-servicemen protest has been registered and their demands would be fulfilled soon. He also held meeting with ex-servicemen leaders where he was briefed by Maj Sher Gondal about the facts of the case. Maj Zafar Warriach was also present. On his assurance the ex-servicemen dispersed.