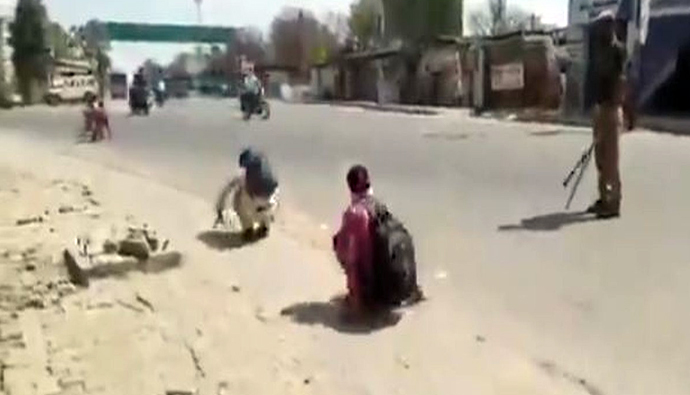 New Delhi: NPP Supremo, Prof. Bhim Singh, Senior Advocate of Supreme Court of India & Executive Chairman of State Legal Aid Committee, besides being a Legislator for 15 years has made a strong appeal to the President of India, Shri Ramnath Kovind to intervene in the present State of Affairs so that half of India’s population which has been shadowed by the present trends under the terror of Corona Virus shall get tremendous moral courage to survive the present situation in India.

Prof. Bhim Singh is receiving hundreds of agonizing messages from friends and critics from different parts of the country which deserve immediate attention of the President & the Prime Minister of India.

i). There is a latest message from Uttar Pradesh Border (Ghaziabad) from daily wagers engaged by the transport contractors that shakes the conscience of a common man. The message says,

“Respected Sir / Madam, Be it known to all concerned helping peoples, NGO's and Government authorities that feed for domestic animals is not available in the markets. I have received some information about this problem from Gol Gujral, Talab Tillo and surrounding areas....Poor villagers and owners of cattles are in great trouble... local leaders are saying DC KO PHONE KARO ...DC KO BOLO, to helpless peoples... It has come to notice that trucks filled with supply of animal feed are stopped at Lakhanpur. These needs to be allowed after proper sanitising and medical checkups, one by one...... otherwise animals including Cows will die of hunger and their carcasses will become major cause of another epidemic”. Prof. Bhim Singh contacted a spokesman of the daily wagers, Mr. Harbans Singh (Mob.9911658778) from Jammu & Kashmir working on the UP Border for a contract company. There is no work at present. Nearly 500 daily wagers from J&K Districts of Udhampur, Jammu, Rajouri, Poonch, Reasi and others have been locked on the border. They wanted to go a back to their homes but there is no transport available as all the public buses/trains has been closed. There is no arrangement for their food and they are waiting for the havens to intervene and safe their lives.

ii). All UP borders with Delhi stand closed. There is no way for the poor people from Uttar Pradesh, Bihar, Odisha or West Bengal to return to their homes. No transportation, no trains and no means to reach their homes.

iii). Several persons from Rajasthan, Haryana, Punjab etc. who had their own means to travel back to Jammu & Kashmir have been stranded/stopped at Lakhanpur Bordering Punjab with J&K.

iv). The latest information from Reasi District Headquarters, Rajouri and Poonch is horrifying as no eatables/vegetables etc. is available in the market even. The local population who have some rice or wheat have no vegetables available.

v). That the private vehicles are not allowed to move from one place to another with the result all the districts/tehsils/towns are cut off from the others.

vi). The Hospitals are also shut for those who need urgent attention of the doctors other than Corona Virus. The nurses, doctors and all other staff coming from far off places to hospital have no way out to reach the hospital or return from the hospital back to their homes. It means that all medical institutions/hospitals are no more available to a patient.

vii). Chaotic situation has been created when all Petrol/Diesel Stations have been closed and no fuel is available even when it is required in emergency situation.

viii). That this is a situation created in the country that all the petrol pumps are closed, markets are shut, hospitals have no arrangements to attend emergency patient.

ix). The most unfortunate situation has emerged that the entire judiciary right from Magistrates Court to the Apex Court have stopped functioning and no one knows for how long?

x). The only working State Organ is the Police. Unfortunately the reports/coverage in the media and social networking has been sending horrifying pictures, the children and innocent people being lathicharged by the Police.

xi). Even some of the disturbing pictures shown deserve attention of the President of India. Children are being made to walk like monkeys with loads on their back. Such indignified, inhuman and unforgivable offences committed in democratic India cannot be forgiven. This is the latest picture from Uttar Pradesh.