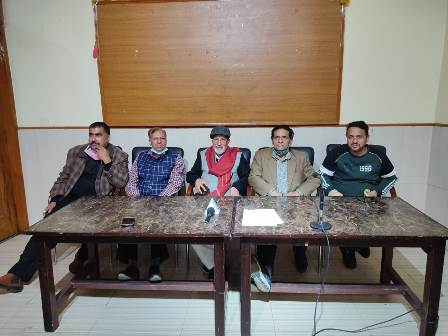 New Delhi: Prof.Bhim Singh, Founder of J&K National Panthers Party appealed to the electorates of J&K to vote NPP candidates contesting election to the District Development Council and strengthen democracy in the state which has been denied to the people of the state which has been reduced to two Union Territories. Addressing media persons at Press Club, Jammu here today, Prof. Bhim Singh strongly criticized the Govt. of India headed by BJP for ordering election in the state without holding delimitation of the respective constituencies. He said that this act of the BJP government at Centre & State is totally discriminatory, unethical and unacceptable to the peace-loving and secular masses of Kashmir, Jammu and Ladakh.

He lamented that democracy and DDC elections in J&K have been apparently hijacked by the present government at the Centre and their agents in J&K.

Prof.Bhim Singh said that the government has blindly ordered 14 DDC constituencies in every district of the Union Territories without following any norms of the delimitation. He said that no consideration has been taken note of so far as population differential these concerns like Doda District having population of 4.10 lacs, Jammu District has 10 lacs, Kathua District has 6.158 lacs, Bandipora has 3.85 lacs, Kulgam District has 4.23 lacs. and all districts have been allotted 14 DDC seats each least caring for population and area of separate district. Same differential is in all other 20 districts.

Prof.Bhim Singh told the media that this is the height of injustice and discrimination. This is unconstitutional discrimination for distribution of DDC constituencies to install democracy at the grass-root level, it all looks dizzare and a joke with the helpless and innocent population of J&K at the hands of the BJP government at the centre.

Prof.Bhim Singh said that people of Kashmir, Jammu and Ladakh were recognized by Father of Nation, Mahatma Gandhi as ray of hope for secularism to flourish in the entire country as such statehood, basic democratic rights and retrieve of illegally occupied territories of erstwhile J&K state by Pakistan and China.

Prof.Bhim Singh appealed to the voters of J&K to vote for the Panthers Party with its symbol ‘Bicycle’ which has been contesting election in several constituencies of DDC whereas in many areas of Kashmir, Rajouri and Basohli the party mandate could not reach in time because of Covid-19 situation and bad weather. He said that this election is being conducted by the Central Govt. by fraud and a newly created party by the Central Govt. to mislead the people and create confusion through illegal means and methods in Jammu and Kashmir.

Prof.Bhim Singh strongly condemned the BJP Govt. in the centre for holding DDC election by ballot and ignoring Electronic Voting only to rig the polls and hold fraudulent election.He said that this DDC election was totally illegal, unconstitutional, discriminatory and corrupt which shall be challenged before the court of law after weather returns to normalcy and the Supreme Court resumes sitting.