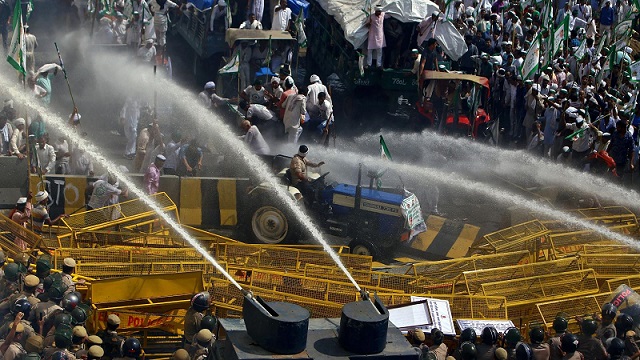 New Delhi: Prof.Bhim Singh, Chief Patron of NPP today held an urgent meeting of the Secretariat of National Panthers Party and conveying the message of solidarity with Kisan Movement from Punjab to Dwarka and Jammu and Kashmir to Kanyakumari as well as from Delhi to Manipur and Assam calling on all Panthers Party activists all over the country to support and express solidarity with the Kisan Movement which has been initiated from Punjab & Haryana, an ancient land of Kurukshetra where Mahabharata took place for the return of justice, equity and equality.

Prof.Bhim Singh called on all Panthers Party units all over the country to take up the movement expressing full solidarity with the Kisan Movement. More than 85% of the population of India belongs to farmers and labourers’ fraternity and the Panthers Party was born in the land of farmers with clear mission that the majority of the people in India who are in absolute majority in India shall work together from East to the West and North to the South to support this 'Mahabharata' seeking justice and equity and equality in education as well as jobs with all. Prof.Bhim Singh declared that all India convention shall be called in the month of January 2021 where all sections of the farmers irrespective of their affiliation with any political party shall be invited to the farmers and labourers grand convention in the land of Mahabharata--Kurukshetra.

He regretted that the BJP government under Prime Minister Modi has spread anarchy resulting in the total insecurity among the people of India. The ongoing agitation by the farmers should raise concern among the government and its leaders that such policies of the government can destabilize the nation resulting in giving a chance to the international forces who are looking at India and its progress. The present confusing state can also make the international businesses decide not to come to India which will result in more unemployment among the younger generation.

He asked the people of India to be vigilant and appeal to support the farmers’s agitation which he said was based on justified needs and demands. He hoped that the ruling clique would realize sooner than later not to divide people of India on the basis of caste, creed, religion and economic status. Unity in diversity is India’s ultimate strength which binds more than 1.35 billions people together and no party can divide people from each other for their nefarious and ulterior motives. He extended full support of the Panthers Party with the protesting farmers’ community all over the country.

The Panthers Party symbol ‘Biycle’ shall bring justice and equity to all sections of the society and appealed the voters to support and vote the Panthers Party candidates contesting DDC elections anywhere in the state. He said that Mrs. Manju Singh is highly qualified, sound in political ideology and concept of human values. Her victory as DDC member shall blossom a rose in this region.